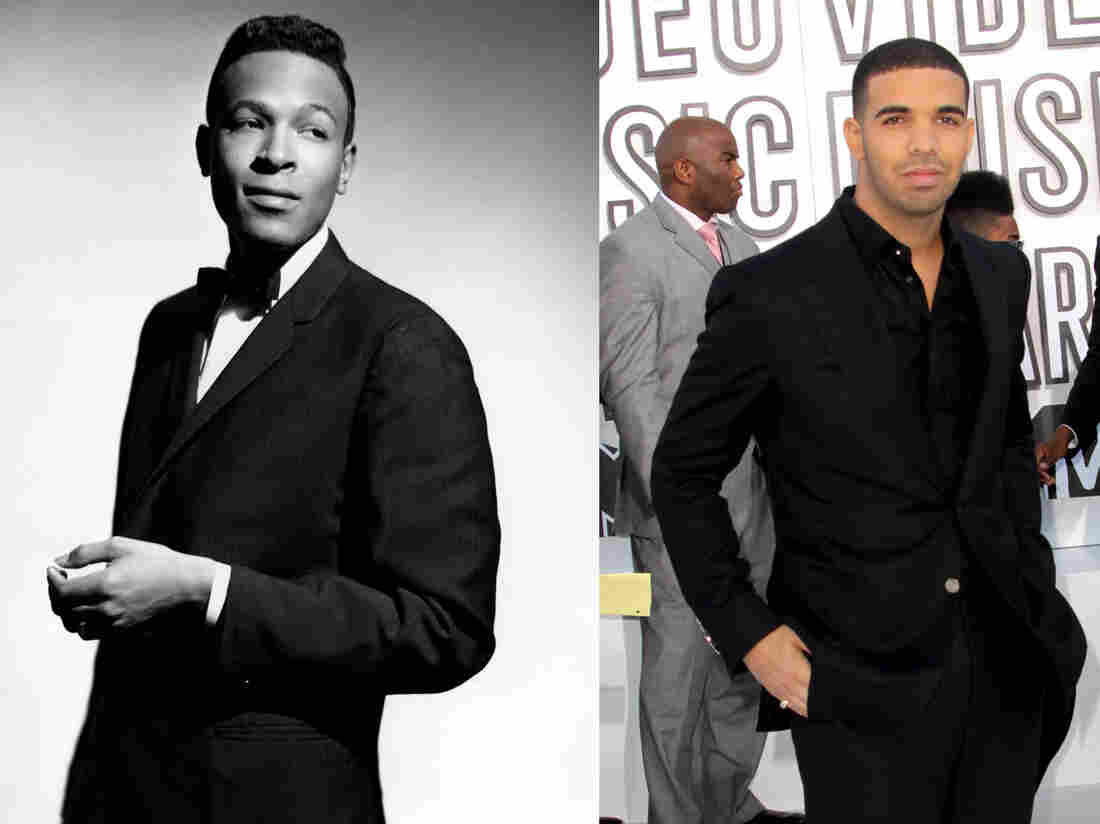 This week may have seen the 40th anniversary of Tupac Shakur's birth, but another soulful revenant has materialized on pop's horizon. Marvin Gaye, whose What's Going On just had it's own 40th anniversary, celebrated with a beautiful new deluxe edition, has revisited us often since his untimely death in 1984. He's been feted in song by the Commodores and Spandau Ballet, shouted to in rappers' rhymes from Big Daddy Kane, Pimp C, and many others and imitated by virtually any R&B-loving singer who's ever slipped into a falsetto.

Right now, it's hip-hop's emo game changer Drake who has opened himself up to a visitation from Gaye. Last week, the Toronto rapper/singer released "Marvin's Room," a pretty, creepy recreation of a drunk-dialed failed seduction that's a tease for his upcoming second album, Take Care, due in October.

Produced by Drake's main minimalist Noah "40" Shebib and obviously inspired by the syrupy quiet storm sound of Toronto collective The Weeknd, "Marvin's Room" is one of those throwaway tracks that keeps surfacing, offering more small revelations. Love Drake or call him out for egotism and overuse of Auto-Tune; his love-damaged yet still sexy persona has changed the game in hip-hop, offering a commercially viable alternative to the swaggering masculinity that's become a trap to so many.

"Marvin's Room," allegedly recorded in and named after the studio where Gaye once worked (and not after playwright Scott McPherson's AIDS drama, though the culturally savvy Drake might have seen that echo as relevant), taps into the magnetic but dangerous spirit of Gaye: not only his seduction skills, but his self-doubt, the vulnerability that made his music so profound and which eventually derailed him. "I need someone to put this weight on," murmurs Drake. Such urges break men and the women who love them.

"Marvin's Room" has already inspired two answer songs. One is by quickly maturing teen sweetie JoJo, and the other is from Toronto diva-in-waiting Rochelle Jordan. These remixes put forward divergent views of how a real woman might respond to the stalker romantics Drake embodies. Jordan's is solid, empowering, and sort of funny, in that Jill Scott don't-give-me-that tradition. JoJo's is disturbingly vulnerable and, to my ears, more affecting — a version of Alanis Morissette's classic vengeance seeker "You Oughta Know" for the age of tragic girls gone wild.

Coincidentally or not, this flurry of music paying homage to Gaye's non-linear slow jams coincides with two other sightings of master's specter. Kanye West protégé Big Sean issued a party track, "Marvin Gaye and Chardonnay" this week, and the Bay Area's trickster emcee Lil B revealed that the cover for his upcoming album I'm Gay will use artwork inspired by Gaye's 1976 album, I Want You.

I'm taking these visitations as a sign that the urban side of pop is starting to go deep again. The presence of Gaye's ghost often grows particularly strong when R&B is making a transition from a frivolous phase into something not so easy to process, that moment when gray light creeps over the night sky and complicated questions greet the morning.

The Marvin Gaye who changed soul music in the 1970s is the patron saint of that cloudy dawn. From the beginning of his varied career, his music was emotionally charged, but What's Going On, the album he released forty years ago last month, exploded the confines of Top 40 music and created the space that's been occupied by so many sensual experimentalists since then.

The Prince of Purple Rain and the D'Angelo of Voodoo, Kanye West at his most honest and Bon Iver's Justin Vernon at his least precious — all of these artists have learned at the feet of the Marvin Gaye who emerged in the 1970s and made albums that still sound brand new now. TV on the Radio's underrated new album Nine Types of Light seeks the delicate balance he cultivated.

In the 1980s, New Wave bands like ABC and Spandau Ballet name-checked Gaye and other soul greats as a way to claim (or at least explore) authenticity. Now it's the sound Gaye created with and after What's Going On that inspires. Like many of his peers (Curtis Mayfield, for example, or Stevie Wonder), Gaye worked in a fusion mode, erasing boundaries between genres. Gaye's grooves also seemed to fuse different emotional affects: simultaneously expansive and insistent, they communicated both fervor and cool, intimacy and a certain sense of distance.

In songs like "Mercy Mercy Me (The Ecology)" and "Inner City Blues (Make Me Wanna Holler)," from What's Going On, Gaye, working with arranger David Van DePitte and Motown house band the Funk Brothers, combined the heat of funk with the measured breath of jazz and just enough pop sugar to help the medicine go down. He wasn't the first to show that that a song didn't have to be aggressive to be powerful, but by shaping a sound that felt organic and intrinsically motivated, Gaye proved that soul music could be based in contemplation, not just testifying.

Gaye also tapped into a deep eroticism that had nothing to do with showboating or lighthearted seduction. This was true on What's Going On, though its main subject wasn't sex, and became even more evident on the frankly seductive masterpiece Let's Get It On. As an artist-lover, Gaye didn't simply reject the role of gentleman/stud that burdened him and most of the great male soul singers; he took it apart, confronted what it gained him and what it cost. He turned the elements of soul singing — moaning, shouting, shadowboxing with rhythm, and of course the hyper-eloquent falsetto — into a form of erogenous self-inquiry.

Drake, who's still pretty callow, doesn't get anywhere near where Gaye was at the beginning of the most powerful phase of his career. But the desire to tap into that energy — to be as soft, as open, as honest as a man can be — puts him on the right track. Gaye, who struggled with depression and addiction, ultimately met a sorry end, but the gift of risk that he gave pop is inestimable. I'm always happy to see him haunting us.