Accessibility links
Irresponsible Listening: A Fan's Confession : The Record Our critic wonders what to do when the same thing that draws you to a musician also repels you. 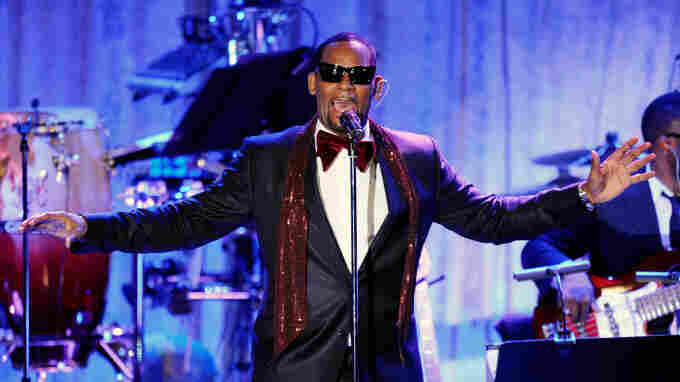 Music can momentarily loosen up the most firmly held convictions. For me, listening can be come a form of lucid dreaming, a hip-sway beyond the limits of everyday reason. Some songs lift me up, letting me imagine myself as a nobler person, or at least more emotionally adept. Others pull me in the opposite direction, into the slimy swamp of unexamined neuroses and id drives. I believe in exploring both in equal measure: make a mixtape with U2 next to Guns N' Roses, Arcade Fire mashed up with Pusha T, Wagner bumping into Bach. Go both ways with music and you'll find out more about yourself.

As much as I believe that art builds a testing ground for untried emotions, lately I've been thinking that sometimes musical enjoyment involves creating a different kind of space. It's the relaxing vacationland of: What, me worry? Becoming self-aware can make a body tired. Sometimes a break feels right. Getting wrapped up in the rhythms of a ridiculous Katy Perry song, one that I would absolutely despise on paper, allows me to enjoy a fairly safe dip into the realm of irresponsibility.

Is it right for me to let down my values occasionally, and dance? Is anything within me changed after it happens? These are questions that pop music devotees need to constantly ask themselves. Many hip hop fans are doing so now, as the deliberately confrontational collective Odd Future Wolf Gang Kill Them All continues its rise. The work of rapper Tyler, the Creator and his pack — sonically hypnotic, but often lyrically repulsive — has inspired enough complicated critical response to fill its own anthology. (One of the best pieces is by my colleague Frannie Kelley.) We'll continue to cover that unfolding saga, which is starting to seem like this year's big pop story.

What got me thinking about this stuff, though, was a recent video clip of R. Kelly, an artist who qualifies as a personal weakness. I've been a Kells fan for quite a while; just the other day, I tried to impress an eighth-grader (I know, we critics can sometimes be pathetic) by telling him about the time I was at a gala and the soul crooner sat down this close to me after his rousing performance was over.

R. Kelly fascinates me precisely because of the uncontained quality of his voice and personality. His performances are always too big for the room; at the gala I've mentioned, he actually entered to the strains of the "Star Spangled Banner," and the show just got more florid from there.

The problem for a feminist like me, however, is that his personal life also indicates a certain refusal to be governed. Earlier this decade, Kelly famously faced charges of crimes against an underage girl, including child pornography. He won his case, but the sexual self-indulgence that put him in a position to be accused of such crimes said a lot about Kelly's refusal to be governed by others, including the women in his life. That excessiveness draws in fans like me, but it's also very troubling. It's possible that the very thing I hate in him is what I love in him. This is a problem I haven't resolved.

Kelly is still making the rounds to promote Love Letter, his very fine 2010 retro-soul outing. Last week had him sitting at the piano with the BBC's late-night host Jools Holland. The YouTube clip above draws a thread between Kelly and Sam Cooke, one of his idols, whose own celestially aimed vocals and earthy appetites created a moral quandary for his fans nearly half a century ago.

Cooke was one of the century's great gospel singers and the man who gave the civil rights movement "A Change Is Gonna Come;" yet his humanity — what religious folk might call his fallen nature — led him to a cold death in a cheap hotel room where he may or may not have been engaged in a form of sexual assault. Kelly has been acquitted of crimes against young women, but anyone who's seen one of his X-rated shows understands that this guy stays deeply in touch with the satyr within.

Singing "Bring It On Home To Me" as Holland tickles the ivories, Kelly reminds us that what's often most enjoyable about art (music in particular), for a fan, is that feeling of being seduced, of relaxing your boundaries and letting someone else take control for a while. Where does the fan reassert herself? That's the biggest question that arises within the listening process. What I'm having to admit is that sometimes, the answer is never. I'm not sure how to feel about that.