Accessibility links
Meet Indie Rock's Most Valuable Sideman : The Record Jon Natchez has played brass and woodwinds for Beirut, The Antlers, Okkervil River and dozens of other bands. He explains how he became one of indie-rock's go-to horn players, and why he prefers long-term gigs. 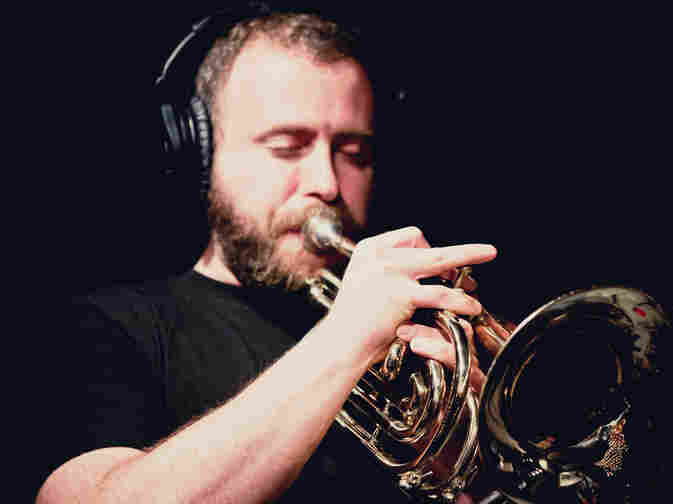 Jon Natchez, in a KEXP studio with his band Yellow Ostrich, in March. Brittany Bollay for KEXP hide caption 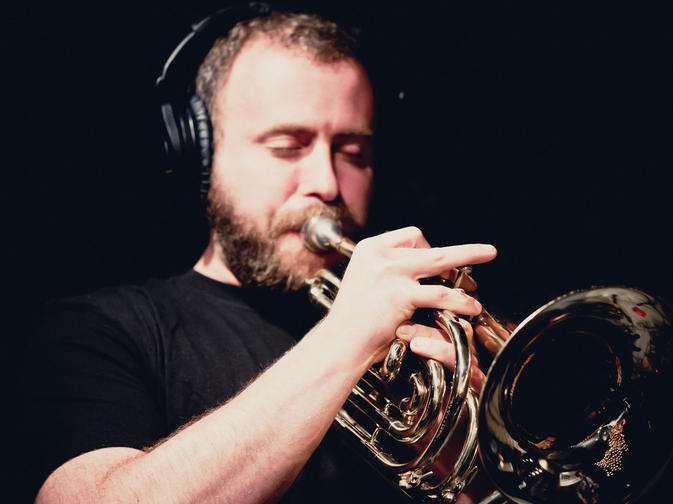 Jon Natchez, in a KEXP studio with his band Yellow Ostrich, in March.

If you've followed the last half-decade in indie music, there's a good chance you've heard Jon Natchez play. A multi-instrumentalist specializing in woodwinds and brass, the 34-year-old Natchez has lent his talents to dozens of bands in the studio and on the road, including Beirut, The Antlers, Okkervil River, Camera Obscura, Bishop Allen and many, many others.

When The Record spoke with Natchez earlier this month, he was on tour with his latest project, the Brooklyn trio Yellow Ostrich, of which he became a permanent member in January. (This week, the band signed with the Seattle indie label Barsuk Records, which will re-release their album The Mistress later this summer.) We asked Natchez how he got so popular, and whether he ever wishes he had the spotlight to himself.

How much time out of the year do you spend on tour?

That really changes from year to year. I should preface this whole discussion by saying that even though I consider myself a sideman, what I do is very atypical. Particularly in New York, sidemen are people who stay in New York, doing lots of Broadway shows and recording sessions. Or, they're road dogs who are always on tour, sort of jumping from band to band. I've managed to do something in between those two. It's a little more project-oriented.

So you'll stick with an artist for a while if both parties are interested?

Sure. I did a one-off in January with Okkervil River, who needed a horn player for a Jimmy Fallon appearance. It was awesome, but it was just a couple days. Whereas with Beirut, I was on the road something like 180 days a year, three years in a row. That's more typical of what I like to do — being committed to a project rather than just sort of flitting about randomly. After I stopped touring with Beirut, I didn't want to just jump on tour with a band I didn't feel a connection with, so I stayed around New York. Last year I was on the road about 10 days.

Beirut started as a one-man recording project, as did a few of your other bands. Is it weird joining a group in that stage, where one person has already arranged and recorded all the parts, and it's your job to retrofit them for a live setting?

That's a great question. Home recording has led to a lot of projects driven by individuals, who've spent a lot of time fine-tuning their stuff and have really specific ideas of what they want. But I've been lucky enough — and it really is luck, because there are jerks out there — to work with folks who are interested in what other people have to bring to the table. I think when Zach [Condon, singer and songwriter of Beirut] was putting his band together, he had an idea in his head of the sounds he wanted to use, and he very carefully found people he thought could fill those roles.

You've filled more than one role in most of your projects. How many instruments do you play?

I've always described myself as a "frosting" guy. I play mainly woodwinds — saxophone, clarinet and flute — and I've learned to get around on most brass instruments. I don't really play drums or guitar very well — none of the things that bake the cake, just the ones that ice it. Though I do play a little electric bass.

That versatility must help keep you in demand. Do you ever wish you could focus on just one thing — like, be the best baritone saxophone player you can be?

Not really — especially not as I've grown up and thought about the way I want to play music, and the kind of music I want to play. A lot of professional sax players will practice 15 hours a day in hopes of being the next Joe Lovano, playing as fast and as complicatedly as possible. I've tried to expand in the other direction. I'm more interested in different timbres and textures and approaches.

Natchez performs with the 10-piece ska outfit Skavoovie and the Epitones in 1999. Skip to 2:00 for his alto sax solo.

How did you start playing professionally?

I grew up in Newton, Massachusetts, a suburb of Boston, and went to school here. In high school I was always a fine sax player, but in my sleepy suburb there weren't a lot of places to play real music. Then, my sophomore year, a friend of mine who was playing in a ska band asked if I wanted to join. I had never heard of ska music, but in the early '90s there was this burgeoning scene in Boston, and a built-in network of clubs beyond that. We started touring almost immediately — like, I'd go on tour during my summer breaks from high school — and kept it going through college. Those guys ended up becoming some of my closest friends in the world.

I moved to New York the week after I graduated, but for a little while I thought music was kind of in my rear view. I actually wanted to do journalism. It wasn't until a year or two later that I remembered music was something I really loved to do. I had lost any interest whatsoever in playing ska, but I still knew a lot of musicians. I had worked out my chops on the road and I knew how to be on tour, and so I was able to play the kind of music I really wanted to play.

Do you ever write your own songs? Have you thought about moving to center stage?

I do write songs, and I do have a little improv group that plays about every six months. But I've always been a better song doctor than song creator. I don't have a great lead singing voice, and I don't really know what my voice would be as a lead presence. That's why I've always loved working with strong vocalists. Alex [Schaaf, Yellow Ostrich lead singer and songwriter] has a great voice, and a great sense of how to write for his voice. He gives birth to the songs, and then we all work together. I feel much more comfortable in that stage of the process, nurturing the seed.

Yellow Ostrich at KEXP's studios in March of this year. Natchez pulls triple duty, starting around 1:10.

Is it worth it financially to join bands for extended periods, rather than just thinking gig to gig? Would you make more money on Broadway, or as a session man?

Broadway is very lucrative, but very competitive. Every year another group of awesome sax players graduates from music schools all around the country, and the best four dozen move to New York. Same with being a hired gun: You'll get paid more doing one episode of Fallon than a handful of club gigs with a regular band, but it's far from stable work. For me, it's no contest. Getting to really live with and develop music — you feel like you're building something, and that's very satisfying. And in terms of the financial reality, it's a way to have a career.

You still do one-offs from time to time, though. Has spending time in high-profile bands made that work easier to get?

A little, but it's more a matter of just sticking around. When I was 23 and had just moved to New York, there were a lot of horn players and no one knew me. I think I survived by staying focused and only playing music I really liked. I have a friend, a violin player and composer. One time we were out drinking, and he said, "You know, growing older as a musician is great, because eventually, you're the only one left." It's so unromantic, but it really is true.

Yellow Ostrich will perform live in studio on WNYC's Soundcheck on Friday, June 17. That same night, Natchez and company will open for Beirut and Sharon Van Etten as part of the Northside Festival in Williamsburg, Brooklyn.