Accessibility links
Empty Spaces, Full Of Music : The Record For a hundred years, there was singing in the classrooms of St. Cecilia's School in Brooklyn. But since the parish closed it down a couple of years ago, the space has been pretty quiet. Then, an idea was hatched: a recording series that matched new music to forgotten spaces.

Listen · 5:39 5:39
In Through The Out Door: Turning Abandoned Buildings Into Recording Studios 5:39 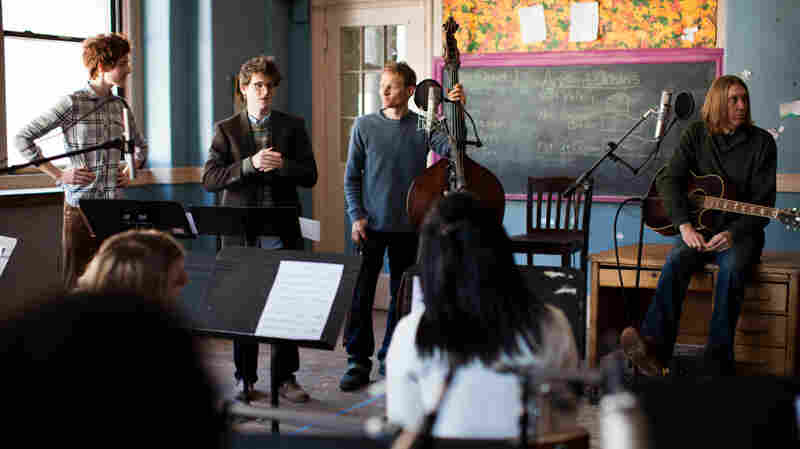 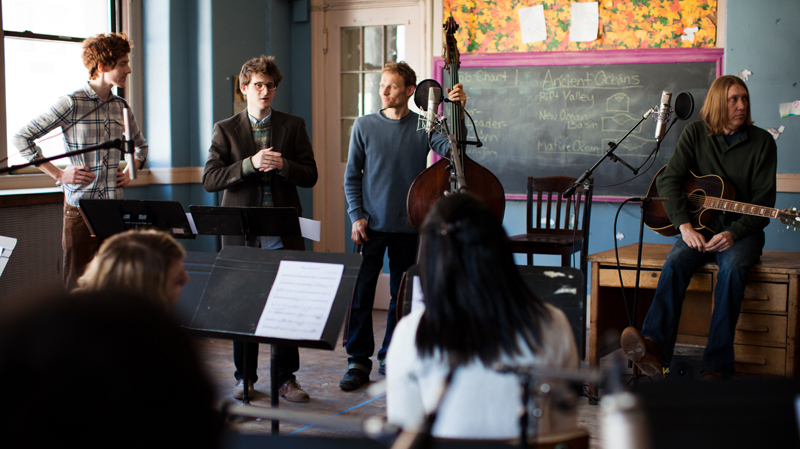 The Mason Jar team conducts a recording session with a chamber orchestra and The Wood Brothers (sitting on the desk, Chris on the left and Olive on the right) in a classroom at St. Cecilia's Church in Brooklyn.

For a hundred years, there was singing in the classrooms of St. Cecilia's School in Brooklyn. But since the parish closed it down a couple of years ago, the space has been pretty quiet. The empty rooms are rented by artists or for the occasional film shoot.

This spring, musician Dan Knobler got the keys to the five-story school building from the church, and when he opened the door, he says he knew it could work.

"It sounded real nice when we walked in and just said some words. I was worried that we were gonna over-saturate it with instruments, having a 12-piece ensemble," he says. "But it has a certain charm to it." Knobler has been scouring the city of New York for empty spaces with that charm.

As recent (or soon-to-be) graduates of the Clive Davis School for Recorded Music at NYU, Knobler and a handful of friends started a recording studio, Mason Jar Music. And they even converted a Brooklyn basement. But the space didn't have the majesty they wanted. So they started to look for spaces that did — places where they could bring in orchestras and bands and get the soaring sound of an epic space.

Carnegie Hall and Lincoln Center were out. But they stumbled upon an old church in downtown Manhattan that would let them record in the middle of the night. Then they got a line on an abandoned hotel where they could set up their mobile recording equipment for an afternoon.

"We realized how important the environment is to the music," Seale says. "The spaces we're in affect the music we play, whether it's a quiet recording studio or a great hall or an empty building."

An idea was hatched: a recording series that matched new music to forgotten spaces. But the Mason Jar Music crew would find that empty buildings bring their own challenges.

At St. Celicia's school, the plan is to record the folk-rock band The Wood Brothers with a chamber orchestra. That's a lot of people to cram into a classroom, and they have to hunt throughout the building to find enough adult-sized chairs to make it work.

Seale had to spend the night in the empty building to guard the thousands of dollars in recording equipment. And when the featured artists arrive they don't get much of a greenroom.

The Wood Brothers, Chris and Oliver Wood, played Carnegie Hall the night before. On the morning of their recording session, they tune up in a stairwell, next to a 10-foot tall pile of desks.

"We've been doing this long enough that we don't get surprised anymore," Oliver and Chris say. "You go from a yucky club to Carnegie Hall and then right back to the yucky sticky beer-filled club. You got to be humbled. Often."

The Wood brothers have already made it in the industry. They've released three studio albums and plan to release another in August. They play high-end clubs and festivals. Chris Wood is the bass-playing third of Medeski Martin and Wood.

They have no shortage of options to record in New York. But then they got a call from a group of young musicians they'd never heard of. The guys said, "Hey, when you're next in the city we have an old building we'd like you to play in." And Oliver Wood thought, why not?

"It's kind of exciting and interesting cause we're stuck in our little world of how we create our songs and live with them," Wood says. "It's kind of cool to hear how someone else would interpret them."

The Mason Jar Music team offers to do all the work. They rearrange the artist's music for orchestra. Set up the space. Bring in musicians and a film crew. All the artists have to do is show up — and not be too surprised by the peeling paint on the walls.

Knobler says that the abandoned building angle has helped his team stand out from everyone else trying to hustle their way into the music industry.

"You know The Wood Brothers have a recording studio to go to make their record," he says. "But they don't necessarily have a team of people who are just chomping at the bit to create something like this. It's sort of coming through the side door. But that's the door that is open to us."

In the St. Cecilia's classroom, the room is now packed. The chamber orchestra players are sitting like students patiently waiting for a lesson. The Wood Brothers lean against the old teacher's desk. Lined up along the blackboards are recording engineers and the film crew.

Then the work begins. The Mason Jar team picked a Wood Brothers' song they thought reflected the nostalgia of school days, called "Blue and Green," and added complicated string and horn sections. They run through the song again and again to get the perfect take.

It's hard to say how it would have sounded different in a pristine studio, but there is a feeling here of sneaking into the space and goofing around. Of getting away with something.

And in a sense, the Mason Jar Music guys are getting away with it. They're in the music business now. Of course, they aren't making any money. The project is supported by volunteers and donations from online fundraising websites like Kickstarter. They hope the videos and recordings will become a calling card.

"To be at the point right now where we can send an email to artists we admire and have them write back and be like, 'Wow this is great, we'd love to work with you,' is pretty cool for us," Knobler says.

And they want to use that success to work their way up to even more interesting spaces: abandoned subway stations, old marble bank lobbies, the Museum of Natural History. Any place that sounds good and will let them sneak in for a night.