Accessibility links
Why We Like Singing Talent Shows So Much : The Record New variations on Idol remind us we actually like our pop stars a little weird. 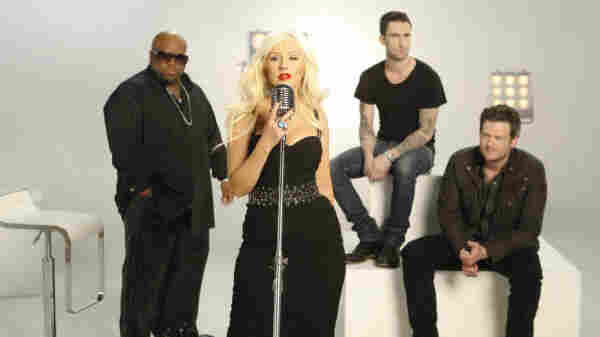 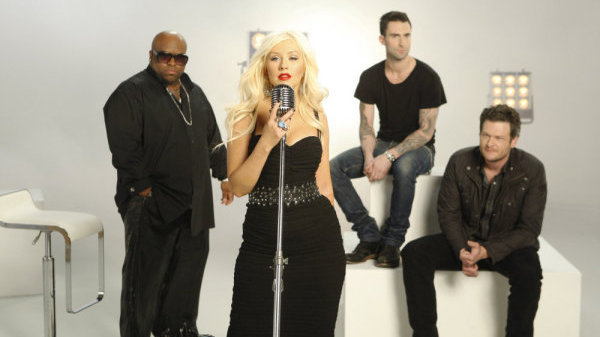 The judges of The Voice (from left to right) Cee Lo Green, Christina Aguilera, Adam Levine and Blake Shelton.

Hear Ann talk about American Idol, The Voice and X-Factor with Morning Edition's Renee Montagne in the audio above.

"We are all made of stars," sang Moby in a 2002 hit inspired by quantum physics and the ravages of celebrity culture, the same year that American Idol debuted. In 2011 that lyric could seem more like a nod toward the colonization of our consciousness by televised talent shows. A decade into Idol's reign, the show's fan-interactive formula has inspired scores of imitators defining our attitudes toward dance, cooking and fashion. A nation of screen-obsessed, text-voting fans see themselves in the strivers on these programs, and change their ways of making dinner or crooning on karaoke night because of it. When you look in your fridge on a given weekday night, for example, has Chopped caused you to consider combining that packet of smoked salmon with the peaches in the crisper and some Ritz crackers? I've been there.

The Voice, which has given NBC the network's first ratings success in years, is a singing competition that — finally — reflects a broader view of its audience. The show features a surprising variety of hopefuls — people of many races, ages, sizes, styles and sexual persuasions, all proudly strutting their idiosyncratic stuff.

The show's initial conceit — their mentor/judges chose them without knowing what they look like — ended up not mattering much. That judges' panel itself included professional oddball Cee Lo Green, cocky nerd Adam Levine and mussed-up diva Christina Aguilera (suddenly lovable again!) alongside standard issue hunk Blake Shelton; The Voice reminded us from the get go that we actually like our pop stars a little weird. Each episode offers glimpses into what star-making is like at it's best — not a cookie cutter process but a process of making the best parts of a person seem bigger, even if they don't fit an ideal.

This fall, former Idol kingpin Simon Cowell will debut the American version of X-Factor, a show of British origin that's spread all over the world. X-Factor splits the difference between Idol's glitz and The Voice's earthiness. More dreamers will try to convince viewers that they matter; more stereotypes will be asserted, broken, redesigned. And we on the other side if the screen will think, "I could maybe do that." Is this a diversion, or democracy in action? Both, of course.