Accessibility links
Grind And Shine: Talking Rap In Seattle : The Record An investigation of Seattle's hip-hop scene as it begins to attract national attention. 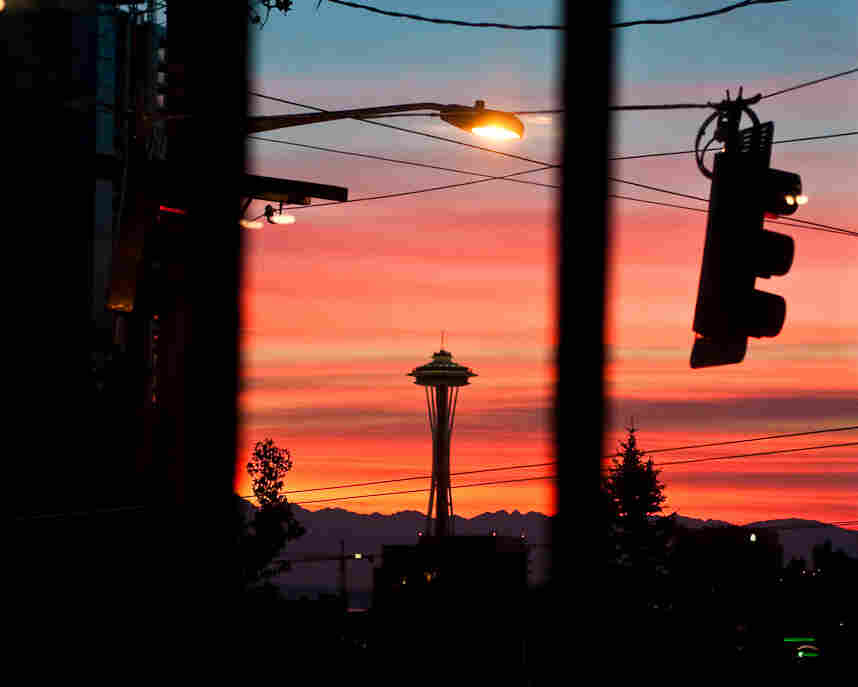 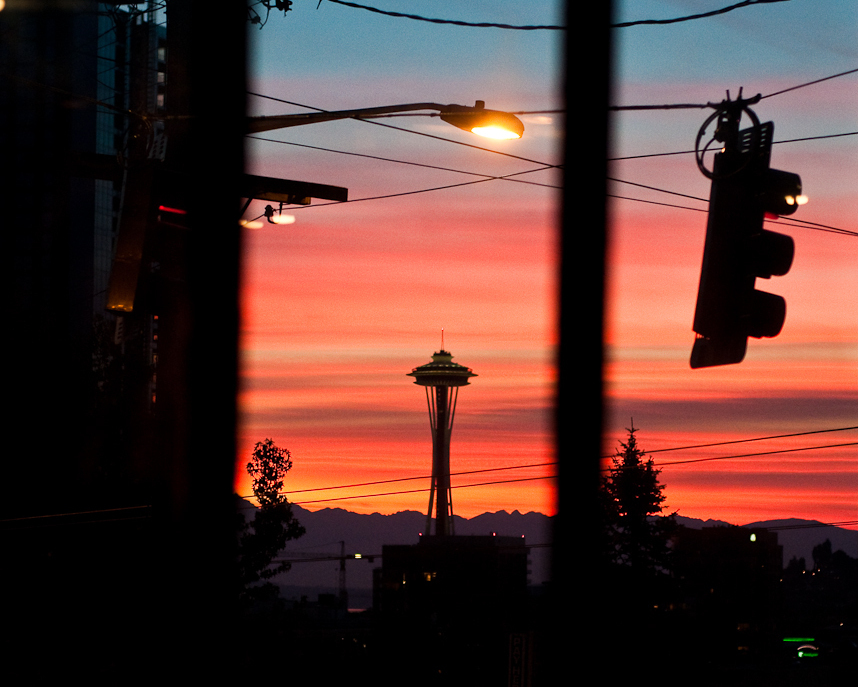 Seattle's skyline, as seen outside the Bauhaus Coffee Shop on Capitol Hill.

You know that person you see once in a while at your favorite hangout, the one whose body language shouts, "This is my spot," but who actually doesn't seem to know much beyond where the bathrooms are located? It's hard to be a long-lost regular, trying to keep a smile on your face as you realize that the place you once called home has really changed. Lose your preconceptions and you might find out that home had more going for it than you actually knew.

I was that fool this past week, seeking out music-makers in my hometown of Seattle. I grew up in the Jet City and have spent my life writing about the renewable resource that is Seattle rock. I lived through Seattle punk, went to college with some of the major players in what people here only grudgingly call "grunge," and after a while away, moved back for four years in the early 2000s to work at Experience Music Project, Paul Allen's so-called Jimi Hendrix museum. I've interviewed Eddie Vedder, like, five times! I am so Seattle.

Not long ago, however, I came to really understand that there's more to the culture of Seattle than the rock and roll I know. I'm not just talking about the Microsoft and Amazon execs who took over in the 2000s — they're a cliché by now, too — or popular newbies like Fleet Foxes and the Head and the Heart, currently showing America the softer side of flannel. I like that stuff, but it's not what took me by surprise.

What I never expected from Seattle is a hip-hop community that's as full of potential as any in America. When I last left town in 2006, crews like the Blue Scholars and Abyssinian Creole were on the rise, repping Seattle's Central District and South End, beyond the rock and roll hotbeds of Belltown and Capitol Hill. Filipinos, Africans and other immigrants were building a new city from the ground up. Seattle hip-hop was pumping, and there was a story there. But I didn't think it could go large.

I was wrong. Back now for an extended summer vacation, I've found that a b-boy or fly girl making laptop beats is as relevant to Seattle music as a bearded guitar strummer drinking a hand-crafted beer. Seattle hip-hop, bubbling up for at least a decade, appears poised to make the transition from novelty status to serious force.

This week, Sub Pop, the label that released Nirvana's first record and which is also home to Fleet Foxes, will release Black Up, the debut album from its first major hip-hop act, the critically adored Shabazz Palaces, which has resurrected the career of Ishmael Butler, once of the hit '90s group Digable Planets. Every week a new hot act was bubbling up on my radar. I noticed that some of my old rocker friends were now frequenting hip-hop nights at Nectar and the Lo-Fi Lounge.

I decided that I needed to explore this scene.

But how? I'm visiting Seattle in the company of my seven-year-old; no late nights at hip-hop-friendly clubs like Neumos for this mama. Then one morning in line with my kid at Top Pot Donuts, I came up with an idea. Everybody in Seattle drinks coffee, right? I'd have coffee with a rapper (or a DJ or a producer) every day for the better part of a week.

Enlisting the music critic and local hip-hop knowledge-bearer Andrew Matson as my guide, I secured dates at the café of their choice with an array of artists who stand for the present and future of Seattle hip-hop. We left out some obvious picks — the popular Macklemore, the dust-stirring crew Mad Rad, local legend Sir Mix-A-Lot. Our small selection includes a couple of veteran artists we feel deserve more recognition, and some of the newer ones who are pushing the scene forward most forcefully on an artistic level.

Grind and Shine will continue here throughout the week. The series begins tomorrow with the producer Jake One, who's made beats for the likes of 50 Cent and Snoop Dogg, and his friend Thig from the up-and-coming South End crew The Physics, surveying Seattle's hip-hop history over Earl Grey tea at Espresso Vivace near Lake Union.

We'll sit down with the super-hot experimental artists Shabazz Palaces and THEESatisfaction at Caffé Vita in Capitol Hill. We'll get trippy with brand new blogger favorites Metal Chocolates at Zeitgeist Coffee in Pioneer Square. And we'll survey the big picture with the Blue Scholars, now veterans entering a new era of musical independence.

Seattle hip-hop is as wide-ranging and contradictory as the genre itself. My assumptions were exploded from the get-go. For one thing, hardly anyone wanted to drink coffee. Chai, tea, wine, water — my hopes for sitting down over a cup of coffee demonstrated how little I knew about what flavors hip-hop creators favored. (I did feel vindicated when I walked up to Geo from the Blue Scholars in front of the Station Café in Beacon Hill and noticed the latte leaf embellishing the stuff in the cup in his hand.)

In just a few days, I learned much about the city I thought I knew well — not only about the music, but about the views from Seward Park, Beacon Hill and Rainier Valley, where many of today's artists grew up or currently reside; the artistic underground bubbling up in studios and loft spaces downtown, and the history that goes back to b-boy crews of the mid-'80s break dancing in Westlake Mall. Seattle hip-hop isn't really new at all — it's the artistic expression of an alternate history of the Pacific Northwest.

As my hometown evolves into a more cosmopolitan place, its hip-hop scene is finally reaching critical mass — transforming Seattle culture and poised to become a national presence. The vibe reminds me of the rock scene around 1989, the year Nirvana released Bleach. Join us here on The Record for the next few days for Grind and Shine, a series that will make you think differently about Seattle music, and maybe about Seattle itself.