Accessibility links
Grind And Shine: Shabazz Palaces And THEESatisfaction : The Record We sat down with the city's most enigmatic groups in Capitol Hill, the hub of Seattle nightlife. 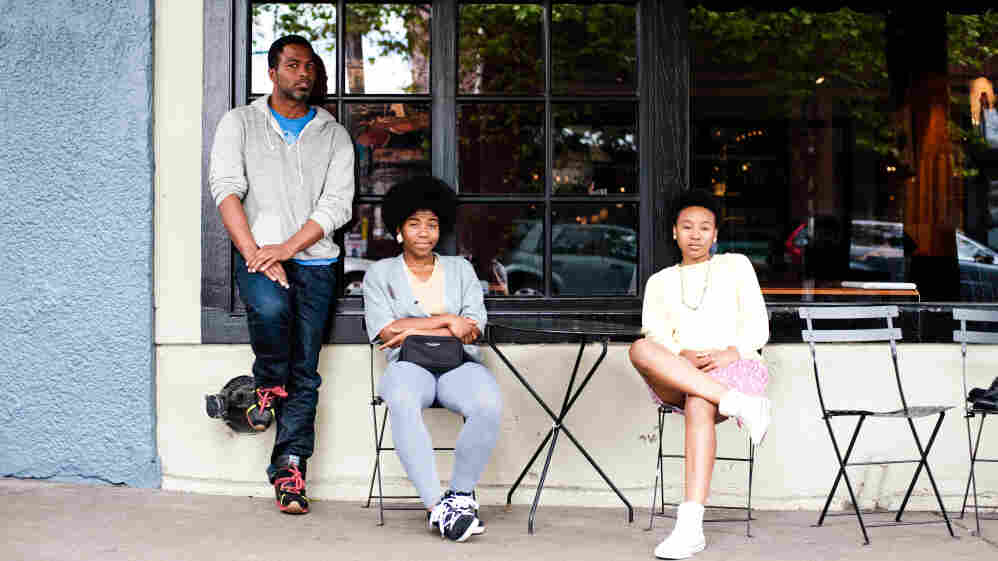 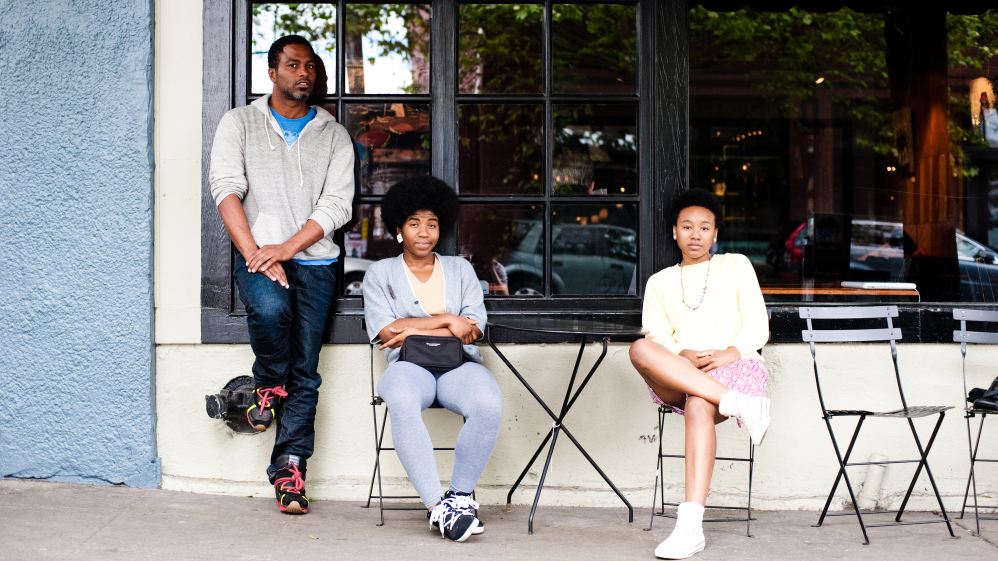 ARTISTS: In Seattle, Ishmael Butler — aka Palaceer Lazaro — has fans monitoring his every move, treating his future-rap project Shabazz Palaces like a religion. Younger hip-hop artists imitate his style. He invariably sells out his infrequent, conceptual concerts. He also has skeptics who find his free-form music irritating. Butler's star rose and fell in the 1990s as part of jazz-rap group Digable Planets — the group was popular in Seattle, but the fact that he was from the city was never widely known. At present, he is Seattle's biggest rock star. To many local residents, he seems to have emerged from nowhere. His masterful new album Black Up is Sub Pop Records' first major rap release — a ghostly document that moves at roughly one billion styles per hour.

The women of THEESatisfaction are a generation younger than Butler, and ride a similarly spaced-out wavelength. Catherine Harris-White and Stasia Irons sing and rap on Black Up. Word on the street is they have already signed a record label contract, with an announcement forthcoming.

Entering Caffe Vita on Monday morning, we looked for Ann's friend Rick Friel, whom she met when he played in a teenage band with Pearl Jam guitarist Mike McCready years ago. But he was out delivering beans. The cafe's rock connection turned out to be relevant: Seattle rockers from Kurt Cobain on down have been notoriously uncomfortable in interviews. So were these three rising hip-hop stars. Their music speaks for itself, and they know it.

Still, we got somewhere once we started talking about the specifics of Pacific Northwest style creativity and the politics of making hip-hop here. In the second interview of our week-long series, Grind and Shine, Jonathan Moore, a scene veteran who now manages both Shabazz Palaces and THEESatisfaction, added key insights from his corner of the table.

ANN POWERS: What is Shabazz Palaces — in your evolution, where do you see this moment fitting in your life as an artist?

ISHMAEL BUTLER: I don't really, like, evaluate and assess my career like that. To be able to sit back and then feel like this is an accomplishment that I need to now recognize and talk about is kind of like, being disrespectful to that gift. So we just keep it moving forward, you know what I mean?

Language Advisory: This song, and others embedded on this page, contain language that some viewers may find offensive.

ANN POWERS: What about working in community with each other? THEESatisfaction is featured on the new Shabazz Palaces record, and, I imagine when Cat and Stasi make their next record Ish will be involved. What brought you together?

ISHMAEL BUTLER: It's hard to really talk about it, because it's natural. Like, it sounds like a cop-out to not really describe it, but we don't necessarily remember what made things happen.

ANN POWERS: Hmm. You just ... grew toward each other?

ISHMAEL BUTLER: Yeah, it's like any relationship. You meet somebody, and then you guys develop into what you become, but you're actively doing it, so it's not like you're recognizing it as it's happening, but ... that being said, it's very easy, natural, and somewhat psychic, really.

ANDREW MATSON: You've played shows together. Would you call yourself a crew?

CATHERINE HARRIS-WHITE: I don't really identify with group names and stuff like that, like clique, crew, camp. We're just beings, you know? We get each other. And like when the music comes together it makes sense. I just don't think it has a formative term.

ANN POWERS: Your resistance to names reminds me of grunge band attitudes in the '90s. Is it something about the Pacific Northwest?

ISHMAEL BUTLER: We're high up, far away from typical centers of things. And that being the case, when you make your bones, you want it to be about what it's about, not about what you're claiming about yourself, or the propaganda that you put out on your own. Even the name Sub Pop — to be under the pop — that's just the attitude we have up here, because it's, like, to have a certain amount of integrity and let the work speak for itself. So I think the location, the climate, the historical things that have gone on here, it all leads to that kind of thing, plus probably a hundred thousand other things that we can't ever really pinpoint.

ANN POWERS: We're on Capitol Hill, a prime spot for Seattle nightlife. What connection do you have with this neighborhood – the club scene?

STASIA IRONS: We've played them all. Neumos, The Wild Rose, The Comet, Havana, The Can Can ...

CATHERINE HARRIS-WHITE: In 2009 we did like a million shows, it feels like. A show every day, practically.

ISHMAEL BUTLER: I like the size, and, more than anything, I like the sound. It's a place I like to go to watch shows and so that's why I like to perform there. I know it's going to sound as good as possible at that size of a venue. It's hard to amplify your music and still have it be in control and have clarity, you know?

ANDREW MATSON: Not many local hip-hop acts tour, but THEESatisfaction got out there early on. Why so much ambition?

STASIA IRONS: We had just graduated from school; we were just ready to leave.

CATHERINE HARRIS-WHITE: We just wanted to see what was out there. And you know, all we had to do was look up plane flights. It was a tour, but it was also a freeing experience, like spring break, but for three months instead of three weeks.

ANDREW MATSON: You self-managed for a long time...

CATHERINE HARRIS-WHITE: Yeah, and then we met Jon [Jonathan Moore], and we had been working and talking for a long time, and he was an old friend, so it just made sense.

ANN POWERS: Jon, you've been part of Seattle hip-hop since your group Source of Labor was playing around in the '90s. How do you see the evolution of the scene?

JONATHAN MOORE: Obviously an infrastructure exists now that might not have been around a decade or a decade and a half ago ... but it's not new. It's really the same ethic and principle as what existed prior, just in a different era and a different time.

ANDREW MATSON: You helped lay down that foundation.

JONATHAN MOORE: I definitely wasn't alone. It was a small, close-knit group of like-minded folks. As Ish mentioned a minute ago, we're here in Seattle, and so you're isolated geographically and essentially you pioneer or you die. You're in the wilderness. You make your way or perish.

ANN POWERS: That principle of self-invention can mask inequalities in a city like this.

JONATHAN MOORE: I lived in Atlanta for five years during college, and Seattle is probably more segregated than Atlanta, believe it or not. It is this kind of ideal that's propped up, that we live in a real liberal Patagonia-yoga-New-Age-type environment, but it can be really repressive here, if you don't have a sense of entity yourself.

JONATHAN MOORE: I can't necessarily say that it's changing. I mean, everything is changing all the time, but to what effect I can't say. I do what I can to combat it just by being present. Because I know that my presence in itself speaks volumes just because you're here. So there's a certain amount of fakeness that just can't go on if you're present because people are forced to deal with the truth, and the realness of the identity, so you can't act as if it's yours.