Accessibility links
Grind And Shine: Jake One And Thig Natural : The Record The first in our series of conversations with Seattle hip-hop musicians includes an established producer and an up-and-coming rapper. 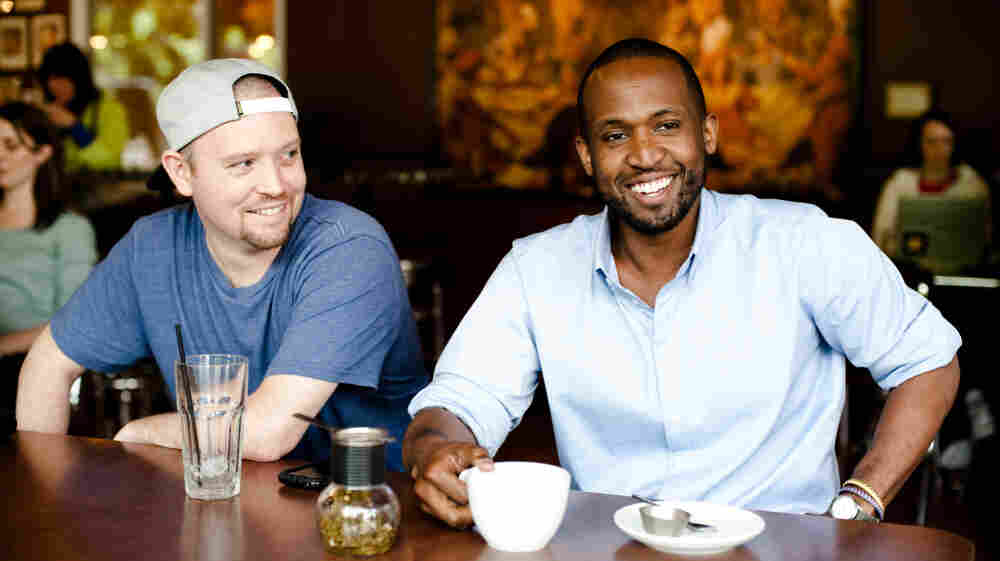 Jake One (left) and Thig Natural of The Physics at Espresso Vivace Alley 24. Kyle Johnson for NPR hide caption 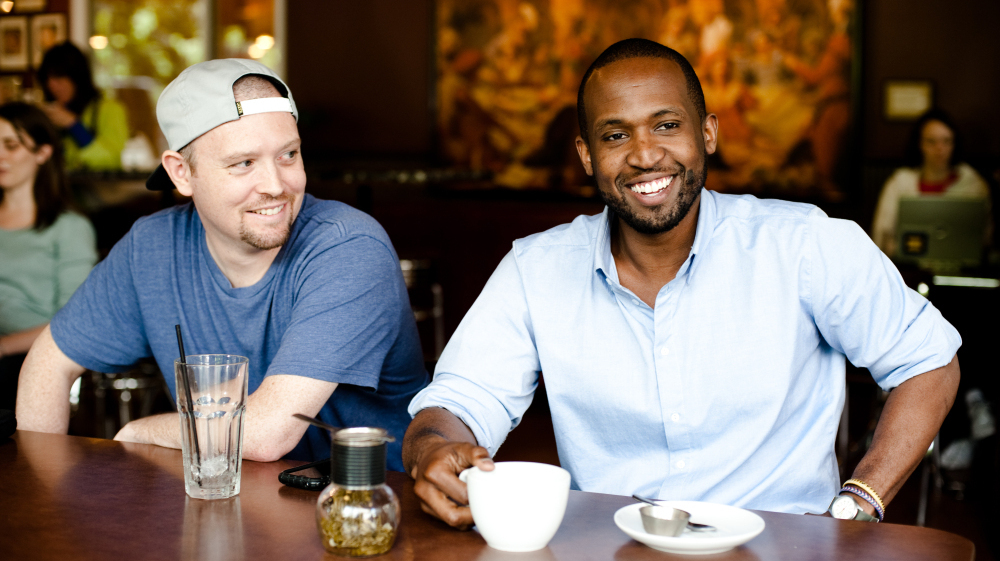 Jake One (left) and Thig Natural of The Physics at Espresso Vivace Alley 24.

ARTISTS: Jake One (born Jacob Dutton) is the rare — nay, unheard of — hip-hop producer who will make a beat for 50 Cent, then turn around and work with an experimental artist like MF DOOM. Overground to underground, no biggie. Recently, he placed standout tracks on Snoop Dogg and E-40's new albums, all while staying closely tied to Seattle, where he's a humble legend. Jake has Seattle Preparatory School students playing keyboards for him, and just the other day he used the Physics studio to track the next album for rising R&B star Mayer Hawthorne.

Thig Natural (born Gathigi Gishuru), of The Physics, is a generation younger than Jake. His trio makes Seattle-centric lifestyle rap, often with a hyperlocal twist. The group reflects some of Seattle's prevalent immigrant populations — East African, Filipino — and crosses between hip-hop micro-scenes, equally at home in South End neighborhoods and downtown art galleries.

South Lake Union is a rapidly gentrifying neighborhood with shiny new retail outlets galore. Meeting Jake One and his friend, The Physics rapper Thig Natural in this corporate space felt odd, but soon made sense: it was a convenient spot for these two guys, who like so many of Seattle's under-forty set, grew up loving hip-hop and now integrate its pleasures into their hectic lives. Dutton, who became a dad just about a month ago, was bleary-eyed in stay-at-home sweats; Thig looked neat in an office-appropriate shirt and khakis. In this, the first interview in our week-long series Grind and Shine, both were effusive about Seattle hip-hop history and their own determination to make a musical mark.

ANDREW MATSON: We are at this coffee shop because Thig works near here at the Fred Hutchinson Cancer Research Center. Did you cure cancer this morning?

THIG NATURAL: Uh, yeah. I cure cancer frequently. No, I do some administrative work; I review the contracts that come through for these big research studies that Fred Hutch does with other institutions.

ANN POWERS: Jake, you're probably the most successful figure in Seattle hip-hop. Why stay here in Seattle?

JAKE ONE: You know, I really stayed here just because it's home. I'm comfortable here. It's frustrating sometimes because I feel like I don't fall into things. A lot of my friends who live in New York or L.A., they might work in a studio and so-and-so comes through and they develop that personal relationship.

Language Advisory: This song, and others embedded on this page, contain language that some viewers may find offensive.

ANN POWERS: Thig, you and Jake are a few years apart in age, but you both grew up here as hip-hop fans.

THIG NATURAL: I spent my youth catching the bus to downtown Seattle, hanging out. I went to O'Dea, which was an all-boys Catholic high school, so we were always trying to go find girls!

JAKE ONE: When I was young — I grew up on Capitol Hill — we always caught the bus. It was a hip-hop thing. We'd be out graffitiing, we'd go downtown, see people break-dancing.

ANN POWERS: You made music on your own for while, and at some point you got into a studio?

JAKE ONE: Yeah. Conception was the first time I ever really went in the studio.

ANDREW MATSON: A lot of people don't know that Sub Pop distributed Conception, a Seattle rap label, in the '90s.

JAKE ONE: Supreme [Conception label co-head DJ Supreme La Rock, a.k.a. DJ Mr. Supreme] was kind of like my older brother, he showed me everything. He worked in [South End record store] Music Menu. One of my best friends from elementary school happened to work in Music Menu. I gave him my beat tape, and Supreme liked it. He took me under his wing, really for no reason, just everywhere he went, I would be tagging along right behind him.

ANN POWERS: And that's how you made a leap to producing huge artists like Snoop.

JAKE ONE: I went to the Gavin Convention, a radio trade event held in the Bay Area. All the rappers would go down there, all the label people would go down there, and DJs and stuff, I went with Supreme, and I made like maybe 30 tapes with my beats on them and I gave them away. I ended up getting a manager through that experience and he's the one who got me going.

ANN POWERS: Can you talk about Seattle's relationship with the larger West Coast hip-hop sound?

JAKE ONE: I don't think I ever really thought about West Coast versus East Coast until [pioneering L.A. group] N.W.A.'s time. That was when it became regionalized. Back then everybody sampled. I wouldn't say it split too much until [Dr. Dre's landmark 1991 album] The Chronic came out, and then there was a huge segment of people who were like, "We don't sample, we only make funk. This is funk music."

ANDREW MATSON: That funkier style is still really prevalent in Seattle rap that is blacker and doesn't get as much media coverage.

ANN POWERS: That's similar to how some people probably felt about grunge.

JAKE ONE: I was just oblivious to grunge. I'm still oblivious. I'm in my own world.

ANDREW MATSON: Was it really possible to live through grunge and not pay attention to it?

JAKE ONE: I knew some of the songs, they were just so big, you just couldn't avoid it, but I don't think I owned any of those albums. I play basketball at this place down the street called Sound Mind and Body. I've been playing two years with this guy, and I was watching Saturday Night Live one night, and I was like "That's the dude I play with!" It was the bass player from Pearl Jam, Jeff Ament. I had no idea!

ANN POWERS: Seattle rappers have as much local pride as any Pearl Jam member. There are tons of songs that name-check local landmarks.

JAKE ONE: There was definitely a shift, where people started being proud of Seattle. Before, it didn't really feel it was that way. People wanted to be from anywhere but Seattle. At some point it crossed over, and I guess that maybe helped some of these newer artists get supported to the point where they could sell out shows. Because a lot of those mid-'90s to late-'90s hip-hop shows were not well-attended.

ANDREW MATSON: Thig, localism is a theme in your music. You could make a Google map for your song about riding the bus, "The 106," or for "Coronas on Madrona" — just go from spot to spot on Lake Washington.

THIG NATURAL: Lake Washington is one of the most beautiful places in the country. Everyone else in the country might not know about it, but in Seattle, you mention that, and people are like, "Oh, that's gorgeous." So why not talk about that, why not bring that up in your music?

ANN POWERS: What's it like making Seattle rap that doesn't exactly fit in with either the "street" or the "backpacker" stereotypes?

THIG NATURAL: It's not hard, it's just a matter of being genuine and being confident in who you are. I grew up in Seattle, my parents weren't poor, they weren't rich, they were just middle class. I feel pretty good about how I was raised and how I grew up, and I'm gonna make music that reflects who I am. There are definitely people I associate with and am friends with that some people would shy away from and consider too "hood," but of course there's the other side, the super-backpack "lyrical miracle" type that I don't necessarily gravitate towards either. I think being in the middle is the best place to be.