Accessibility links
Pop's Punching Bag: Hating The Black Eyed Peas : The Record A look at how one of the world's most successful pop groups manages to engender so much animosity. 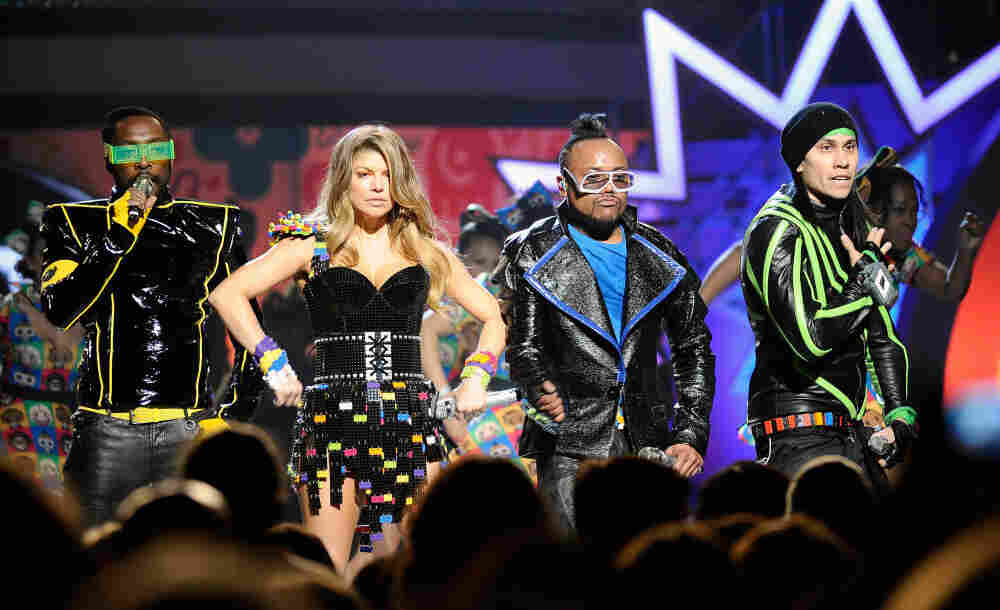 Last week, the Black Eyed Peas broke up. Or, went on "indefinite hiatus." Okay, not really — just days after singer Fergie announced from an English arena stage that the group would take a break, and will.i.am confirmed it via Twitter, the radio/concert promotion conglomerate Clear Channel announced that the group would be a headliner at its iheartradio festival in Las Vegas in late September.

It's hardly surprising that corporate fealty trumps inter-group tensions, Fergie's maternal aspirations, and will.i.am's desire to focus on a solo career for a while. We're talking about the pop entity that most aggressively embodies the spirit of late capitalism — a post-human quartet whose music is indistinguishable from advertising jingles and whose image has been ingeniously designed to appeal to all markets: part marionette, part video game, part sex toy. If a powerful conglomerate like Clear Channel says jump, the Peas jump. There will be a Target event and a Davos-style summit to follow, I'm sure.

It's not shocking, either, that the mere hint of a possible Peas dissolution sent online music commentators into a frenzy of delight. Headlines like "Fans React With Delight after the Black Eyed Peas Announce Hiatus" (NME) and "Celebrating the Black Eyed Peas' Hiatus by Charting Their Decline" (Flavorwire) typified the general response.

The Black Eyed Peas have long been the most successful widely despised pop group in the world. Trashing the foursome is the pop critic's equivalent of playing Angry Birds: a semi-mindless activity that one takes up to keep the reflexes sharp or just to pass the time. Yet I've noticed that the virulence the Peas inspire, while responsible for some very funny and often insightful writing, goes so far beyond reason that it must, as your shrink would tell you, be about something deeper.

Let me pause right here and assure readers that this post is not a defense of the Black Eyed Peas. For that, read Rob Tannenbaum's neat slaughter of the backlash against the Peas Superbowl show on the Popdust site, or Jonah Weiner's ode to the song "Boom Boom Pow." I won't defend the Peas, because I don't particularly like Peas music. Over the past decade, I've hated the band as much as has the next music nerd — especially during the reign of "My Humps," the weirdest case of female self-objectification in pop's history, and that's saying a lot.

I admittedly succumbed to the beat of "Boom Boom Pow" under the influence of my seven-year-old's delight; and once, watching the Peas open up for U2 at the Rose Bowl, I enjoyed the frisson of observing an actor I admire dancing in abandon to the thumpy-thump. And I admire will.i.am.'s marketing genius. I think it's possible to do so and still go into a full-body cringe when "Just Can't Get Enough" comes on the radio ... again.

So I'm not a Peas admirer, really. But I do think their haters haven't really explained the intense negative response the group engenders. Let's review the top five reasons cited for making a face while you're forced fed some Peas.

1. The Peas are blatantly commercial. The NASCAR racers of pop, the Black Eyed Peas are covered in corporate logos. Peas leader Will.i.am.'s commercial ambitions are much more clear than his artistic ones. But what mainstream pop artist isn't the equivalent of a soda flavor these days? (I know, I know, Adele. But not entirely.) Even the Cool Kids are making product-oriented deals — literally. The Chicago hip hop duo with that name recently stuck a Mountain Dew logo on its album cover, and still got some pretty good reviews. It's also odd that detesting the Peas is so common at the very moment when admiring Mad Men's troubled hero Don Draper, adman extraordinaire, is so fashionable.

2. The Peas are fake. So are the Gorillaz, cartoon brainchild crew of the widely admired Brit-pop visionary Damon Albarn. So, for that matter, is KISS — the group that the Peas most closely resemble. KISS was hated or ignored in its time; now its music has influential champions like the best-selling author Chuck Klosterman, and Gene Simmons gets props as a pioneer in the music-branding game. Lady Gaga has her detractors, but no one can deny that her performance-art pop is hugely influential right now. Virtual reality dominates the culture right now.

The Peas are right in step with that. And it's arguable that the group's extreme inauthenticity — the Willy Wonka-goes-to-Mars costumes, the stylized dancing, the computerized sheen that encases its music like a silicone skin on a laptop — helps translates its particular edginess, including will.i.am's obsession with club culture and a multiculturalism that's not a cliché but a 21st century urban reality, to a broader audience.

3. The Peas are offensive. "My Humps" was only the beginning, sadly. Peas-associated lyrics have also included references to "boobies," jokes about epilepsy, and multiple uses of the Asian-stereotyping phrase, "Love you long time." Yuck! But no yuckier than Kesha rhyming "famous" with a lower body part, or Pitbull instructing Jennifer Lopez to "back it up like a Tonka Truck." LMFAO's ridiculous "Party Rock Anthem" is the nation's biggest hit right now, and it celebrates running through women "like Drano." Think indie music honors more delicate sensibilities? Jump in, if you haven't already, to the earnest critical debate surrounding "transgressive" hip hop collective Odd Future, or consider that the most lauded punk band of the year has a name that violates FCC regulations. (Rhymes with "sucked cup.") Pop culture today often seems like a kindergartener's idea of comic heaven: one long fart joke.

4. The Peas were good before Fergie. I saw them back then. They were okay. There's a reason they weren't commercially successful, however — their songs lacked hooks and a strong vocal personality, which, like it or not, the cheerfully ungraceful Stacey Ferguson possesses. Furthermore, the argument that the pre-Fergie Peas stood up for "backpacker" rap values worth preserving only holds water for the few purists who wish Q Tip and Phife Dawg of a Tribe Called Quest could just get along. Today's most lauded hip hop stars, from Kanye West to Eminem to Jay Z, are just as eager to top charts and make bank as is Will.i.am., and underground groups like Shabazz Palaces broaden their sound by collaborating with women, too.

5. Peas music is just plain irritating. This is a circular argument. Irritating is in the ear of the beholder, and it's obvious that plenty of humans enjoy Will.i.am.'s blunt Eurobeats.

If none of the common arguments against the Peas truly justify the repulsion so many feel toward them, what could the problem be? I need you to tell me what you think, dear readers — and challenge yourself by not using the words "fake," "Auto-tuned," or "repetitive." Bon Iver's Justin Vernon manipulates his voice electronically; James Blake's songs are repetitive. It's proven that those qualities can appeal to music connoisseurs as well as drunk, barely post-adolescent partiers.

Before I go, I'll briefly float one theory as to why the Peas earn so much vitriol. Call it reason six: In every hit and with virtually every move, the group celebrates the baser instincts of 21st-century humanity. Their party anthems put a happy face on alcoholic overindulgence, thoughtless consumerism, money hunger, sexual exhibitionism and promiscuity, and snapping on your friends. ("You're so 2000 and late," my kid now regularly tells me. Thanks, Fergie.)

But while artists like Odd Future's Tyler the Creator, Kanye West and even Lady Gaga temper their own id-outpourings with elements of sonic or lyrical darkness, the Peas never do so. They are cheerful marauders, putting a positive spin on the very desires and behaviors that we all know should be kept in check. They imagine what life would be like with no consequences. I'm surprised they haven't crafted a sing-along about throwing recyclables in the trash.

We all know that there are consequences to our individual and collective transgressions. From several different vantage points — economic, environmental, political and even spiritual — paying up now seems to be the order of the day. Pop music often serves as a respite from the daily sorrows of the average person's life, which right now might include long-term unemployment, a foreclosed house or fears stimulated by that toxic waste dump down the road. But in the end, a non-stop party troubles us too.

So, a word of advice for will.i.am: on that solo project you're planning, let us see your down side. Maybe collaborate with Jamie xx instead of David Guetta. Whether it's a Peas recipe or something else, adding an ounce of regret might be worth a pound of good feeling.