Accessibility links
James Taylor Is Not The 'Whitest' Guy You Know : The Record The singer's influences aren't always apparent, which has made him easy to caricature as bland.

James Taylor Is Not The 'Whitest' Guy You Know

James Taylor Is Not The 'Whitest' Guy You Know 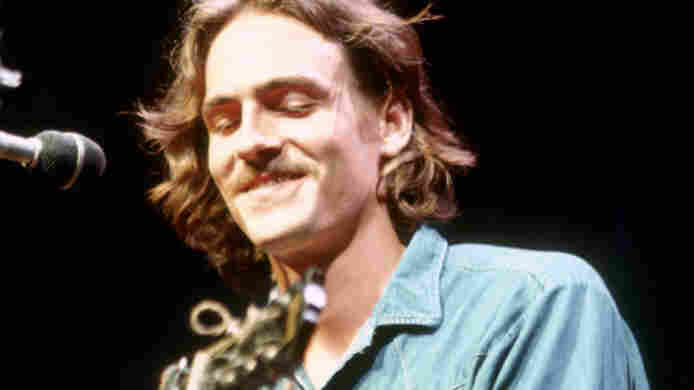 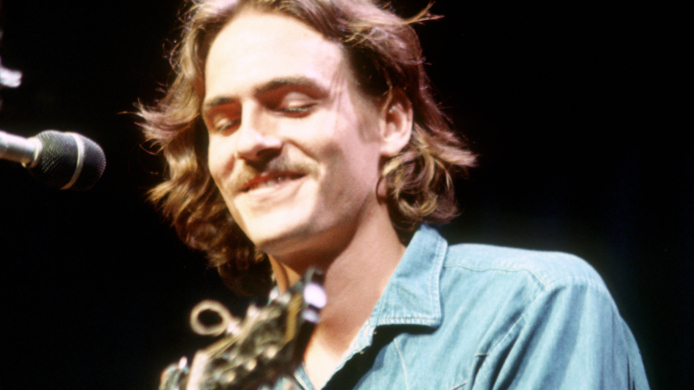 James Taylor onstage at the Mariposa Folk Festival in July of 1970 in Orillia, Ontario.

It's pretty common for people to accuse James Taylor of being the whitest guy in popular music. A guest column in SPIN magazine by the comedy troupe the Whitest Kids U Know accused the singer-songwriter of penning hits that make John Denver's albums sound like Public Enemy. "Stiffer than titanium, that boy," wrote one blogger after sitting through the singer-songwriter's 2006 PBS special. "We could have been at a nursing home in South Carolina," cracked Huffington Post regular Andy Ostroy of the very Caucasian crowd surrounding him at Taylor and Carole King's Madison Square Garden last year.

Aside from being an avenue for casual cruelty, accusing James Taylor of being too white can be a way of condemning the musical and cultural shifts to which he's tied, and for which he's often partly held responsible. An uber baby boomer, Taylor gained fame just after the 1960s faded out, and his acoustic-based, self-reflective ballads represent a softening of the fervor of that time — as well as a turn toward pretentiousness and narcissism. Lovers of raw rock like the late, great critic Lester Bangs labeled Taylor's ruminations "bardic auteur crap," and that gentility has also long been associated with whiteness: chinos and picnics and skiing and gently singing along to "You've Got a Friend."

A polarizing figure from the minute he gained notoriety, Taylor's now as often imitated by young musicians as he is scorned. Whether they despise him or want to cuddle up inside his sweater vest, Taylor's listeners still often miss the central role African-American influences play in his music.

Like the young artists who now play in his wheelhouse — Iron & Wine, for example — Taylor is a sly borrower. What has seemed to many like a rejection of the grittiness of blues and soul may actually be a way of coping with anxieties about personal identity that afflict any thinking musician trying to find a space within American music. I'm not saying James Taylor isn't awfully self-satisfied and tediously droll. I'm just saying he may not be as "white" as many people think.

These thoughts about Taylor came to me while I read David Browne's new book, Fire and Rain: The Beatles, Simon & Garfunkel, James Taylor, CSNY and the Lost Story of 1970. The book offers a refreshed view of the moment when the counterculture allegedly went soft. Browne's finely-detailed, engrossing narrative joins a list of new works, including books on disco by Alice Echols and Tim Lawrence and a soon-to-be-published work on New York's mid-'70s music scene by NPR regular Will Hermes, that reveal the decade to be one as complex and artistically rich as was the one that gave us the British Invasion and the Summer of Love.

Browne's tactic is to closely follow the year 1970 as it was lived out by the artists mentioned in his title: a time that, for each, signaled endings and beginnings. There are plenty of threads to pull within his larger narrative; we talked about some of them Tuesday on Minnesota Public Radio, in a freewheeling discussion with host Kerri Miller on her show, Midmorning. One we didn't discuss, however, grabbed me as I absorbed Browne's multi-layered narrative: the way that these artists, giving shape to the singer-songwriter phenomenon, still carried forward the debt to African-American music that more obviously defined the work of '60s bands like the Stones and '70s peers like Led Zeppelin.

I asked Browne about this in an email after our conversation. Here's what he wrote:

It's important to remember that many of these artists grew up not just with Elvis, the Everly Brothers and Buddy Holly but with the R&B (and sometimes) blues records that blared from radios in the '50s. "Bridge Over Troubled Water" is a perfect example: Paul Simon very consciously wanted to write a gospel song and even instructed the late Larry Knechtel, who played piano on that track, to give it that feel. Stephen Stills spent time as a kid in Tampa, Fla., and learned how to play blues guitar from an actual bluesman, then incorporated gospel and blues into his first solo album. ... John Lennon specifically asked Billy Preston to play piano on the classic "God" from Plastic Ono Band because he wanted to give the song a churchly feel. And of course, George Harrison both paid homage to and poked a bit of fun at county blues on "For You Blue" on Let It Be. Thanks to that kind of subtlety and restraint, the results sounded far more natural than your typical white-blues track of the day. Although we tend to think of these musicians as all being very white, their influences were far from that.

Browne also mentioned something I'd noted: that Taylor idolized Ray Charles growing up. "His friend and future guitarist Danny Kortchmar told me that the first time he heard Taylor's singing voice was while they were hitch-hiking and Taylor broke into a Charles song," wrote Browne, a factoid he also includes in his book. Taylor's chance to meet Charles was less than magical: spending time in McLean, a Mass. psychiatric hospital, as a troubled youth, Taylor was horrified to see that great artist one day in the cafeteria. "Charles, who'd been sent to McLean for a heroin bust, was really there," writes Browne. "The sight of one of his heroes in the ward haunted him for decades."

That image — of Taylor in a corner, noticing the man he most wanted to emulate nearby but likely suspecting that contact would likely not be welcome — made me rethink Taylor's music. I noticed other details in Taylor's story that reinforced the link between this Martha's Vineyard habitue and African-American music, especially the blues.

Taylor was born in the North, but his family spent a good chunk of his early years in North Carolina. "The sense that they were in the South but 'of the North,' as James recalled, led him to feel isolated early," writes Browne. Taylor's music has always been noted for its melancholy. It's possible that this quality reflects the soul of a white kid plunged into a very different racial dynamic than the one he would have known if his family had stayed in New England, where he was born.

I hear that outsiderness in Taylor's music. A 1971 Time magazine cover profile called Taylor "a fusion of the three black and white mainstreams of pop: the lonely twang of country, the pithy narrative of folk and the rhythmic melancholy of blues." His famous clean guitar picking style could relate to bluegrass, but seems as grounded in the Piedmont tradition made most famous by Mississippi John Hurt. And his vocal phrasing, precise and slightly behind the beat, isn't merely the diction of a boarding school boy; it's also reflective of the jazz artists he admired, like John Coltrane and Billie Holiday.

What's different about the way Taylor absorbed African-American music, it seems, is that he felt a bit embarrassed about it. One of his early songs is called "Steamroller"; it's an over-the-top bit of sexual predation rife with roadhouse clichés. It's also a joke. Robert Christgau, mostly panning a Taylor concert in 1972, called the song "a brilliant parody of the macho white-blues fantasy, at once so attractive and so repellent. ... It is significant that he and his band and his audience could find no other climax to the concert." Taylor may have been on the road to superstardom, but he couldn't figure out how to capture the anarchic energy of classic rock band without sinking into the stereotypes he disdained. So he did it with a distancing smirk.

In the songs he took more seriously, Taylor blended together his influences into a smoothie of perfect songcraft. In a way, he continued to honor his beloved Ray Charles, who also sought to create a hybrid musical form that went beyond blues, jazz or country. Of course, when you're a cultural blue-blood like Taylor, your mix will likely come out the color of privilege: the pseudo-generic hero in American culture, traditionally, looks and sounds a lot like Sweet Baby James. His efforts to not mimic a culture that isn't rightly his may often be misread as elitist and exclusionary.

In American culture, if not enough in our real lives, boundaries have a healthy way of dissolving. One caller to the radio segment I did with Browne was a young man who identified himself as a hip-hop artist. He said that when he looks for inspiration, he regularly turns to songs like "Fire and Rain." And he's not the only one. Listen to this cover of "Fire and Rain" — it's by Kenneth "Babyface" Edmonds, the singer, songwriter and producer who co-founded LaFace Records and helped establish the careers of R&B greats like TLC. If James Taylor is the whitest guy in pop, then that just proves the deep multiracialism that defines America's soundtrack.

This column, particularly the headline, is generating a lively conversation in the comments below. Reader Tim Trew wrote:

"I find the pejorative use of 'white,' offensive, as it harkens back to the stereotype that anything from Black culture is 'cool' which stemmed from the taboo of crossing social color barriers."

Tim, I agree with you. I wrote this post partly because I find the common criticism of Taylor as "too white" not just offensive but inaccurate. As David Browne notes in his book, Taylor himself wrote "Steamroller" to make fun of the mostly white blues bands he saw in the Village as a young man — he, too, was taken aback by their mimicry of African-American style, presumably in the pursuit of cool. To me, the greatest sign of musical integrity is finding your own way to incorporate a wide array of elements and inspirations. This column was an effort to honor Taylor's elegant and subtle career of doing just that, and also of looking at why he, unlike many of his peers, chose not to directly imitate his inspirations. As for my own feelings about Taylor, his music has been a a part of my life since I bought and loved his JT album when I was thirteen. It was his cover of "Handy Man" — a classic R&B song — that first won my heart.

We've modified the original headline above, adding quotation marks around the term "whitest" as I had in the text, to better reflect the tone and intent of the post.