Accessibility links
A Tribe Called Quest: The Rise And Fall Of A Legend : The Record They were one of the most successful and influential groups of all time. They came up with an original style which stood apart in their time, the early '90s — and somehow, they managed to do it together. They are no longer together. A new film tries to explain why. 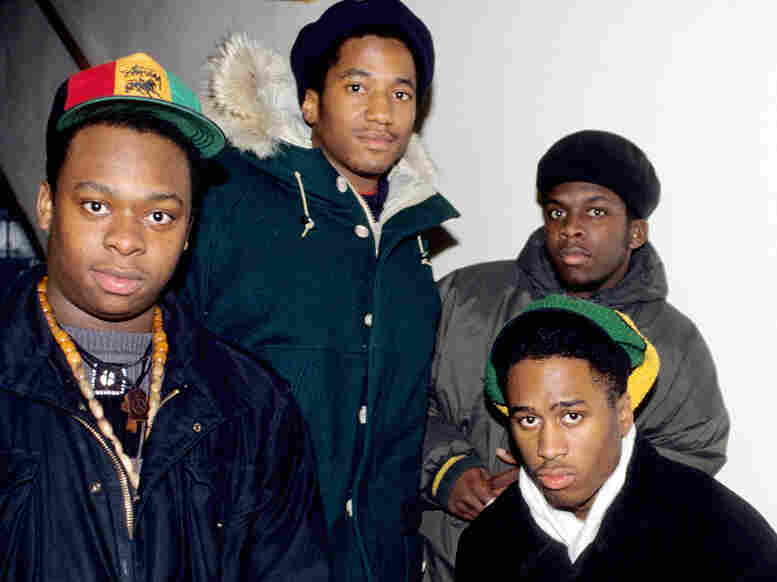 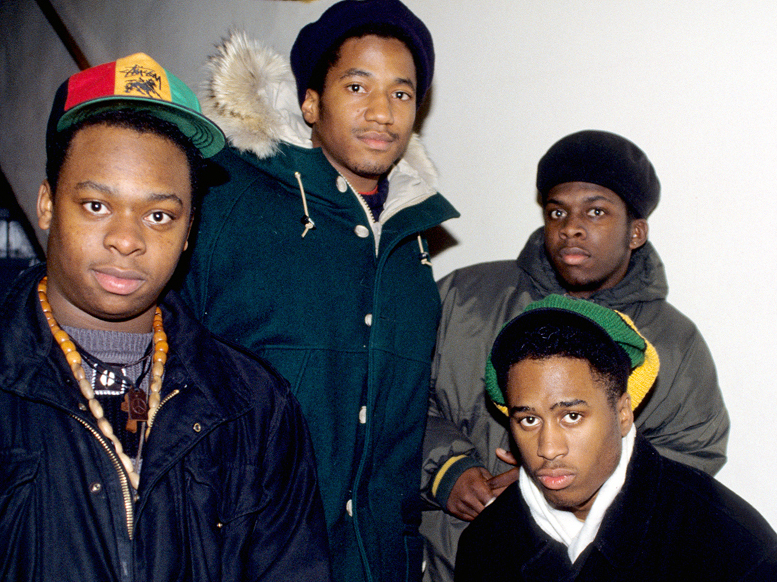 Turning a handful of people into one really good, productive band is so complicated it's almost a miracle when it happens. For a group of musicians to cohere, almost everything needs to balance out: ego, work ethic, knowledge, health, experience.

Pioneering hip-hop group A Tribe Called Quest hit that balance in a spectacular way. In the span of four years, starting in 1990, the group released three albums widely acknowledged by hip-hop fans to be among the best ever: People's Instinctive Travels and The Paths of Rhythm, The Low End Theory and Midnight Marauders.

A new documentary, called Beats, Rhymes & Life: The Travels of A Tribe Called Quest tries to tell the musicians' story. But, like the group itself, the film is complicated.

"When they broke up in 1998," he says, "their last album The Love Movement — I was unsatisfied with that and I just didn't understand why they were breaking up. They meant so much, emotionally, to the fans that I wanted to know why. That was really my reasoning for the film: Can they make more music? Will they make more music? Why did it end?"

Those are burning questions for all of the group's fans. Tribe's DJ, Ali Shaheed Muhammad, has one possible answer.

When A Tribe Called Quest was first getting started, straight out of high school, it was the '80s, and hip-hop was young. Original group member Jarobi White says he was having more fun than anybody else, and his crew was firing on all cylinders.

"Being so young, I mean 19, 18, that's young," he says. "We had no idea. Everything was just flying by the seat of your pants. How it felt. How it felt was the only thing that matters. Am I enjoying it? Do I feel good about it? Yes? That's what we're doing. The money and the fame and all of that stuff, that was all secondary."

"We were just trying to be fly," Jarobi says. "And make music. And be musicians. Be like Stevie and Marvin and Prince. Thelonious Monk and Mingus and Charlie Parker. We were trying to be those people."

A Tribe Called Quest were part of a bigger community of people in New York making music that they believed was important: groups like the Jungle Brothers, De La Soul, Queen Latifah, Consequence, Leaders of the New School, Monie Love and more. They all made music together, shared studio time and traded ideas. They competed and pushed each other to be better. They often thanked and name-checked each other on record.

"Creating music and specifically hip-hop," says Ali, "when it was still so new — I think the time period we lived in added to the greatness of the sound. As far as lyrical topics, subjects, they were more heartfelt."

A Tribe Called Quest burned hot and bright. They worked collaboratively much of the time, sampling the jazz records their fathers loved instead of relying on the funk and James Brown samples rampant in hip-hop at the time. They had a huge impact on their peers and on a younger generation.

And then it all fell apart.

As Rapaport points out, "The Beatles broke up. Led Zeppelin broke up. Jimi Hendrix even broke up his group and formed another group. Public Enemy broke up. It happens."

In the story Rapaport tells in his film, Tribe broke up because Q-Tip and Phife vied for control and credit. But the story the band tells is different. While they were in the studio, they say, their world was changing.

"The largest difference between the hip-hop game now and back then is that people make songs," Jarobi says. "They don't do projects anymore. We did projects. Notice I didn't even say album, we did projects."

"I just know about my group and why we came together," Phife says. But he's not surprised there aren't as many hip-hop groups working today. "The way I see it, as of right now, you don't see a lot of that because you have to split that money three, four ways."

Phife, Jarobi and the other two members of Tribe agreed to make the movie because they wanted their work to be documented, and because their peers pushed them to do it. Nas, one of the most celebrated MCs in hip-hop, told Ali Shaheed that Tribe is hip-hop's version of The Beatles.

Perhaps there was another reason. By the time Rapaport came calling, Phife was sick from diabetes. Eventually, he needed a kidney, which his wife donated.

The sequences on screen aren't all pretty, but making the movie helped at least some members talk about the good times and the bad.

"I guess I needed therapy for going through what I went through, or at least while I was going through it," Phife says. "I usually don't talk about it with anyone — I'm pretty much discreet. And when I started talking to [Rapaport] about it, it felt like that's really what it was — therapy. I just really put it out there, knowing that he was gonna show the world. I was like, 'You got the beats, you got the rhymes. This is life right here.'"

As for all of Rapaport's burning questions — the whys and the what-ifs? — the answers are in the music.