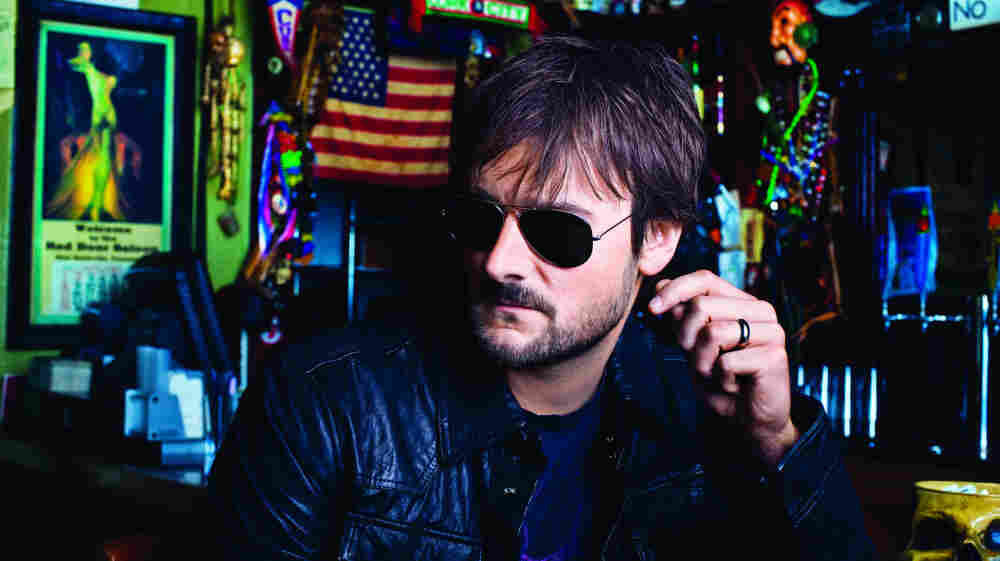 Eric Church, whose Chief topped the Billboard 200 album chart last week and is joined in the top 10 this week by three other country albums. John Peets/Courtesy of Capitol Records hide caption 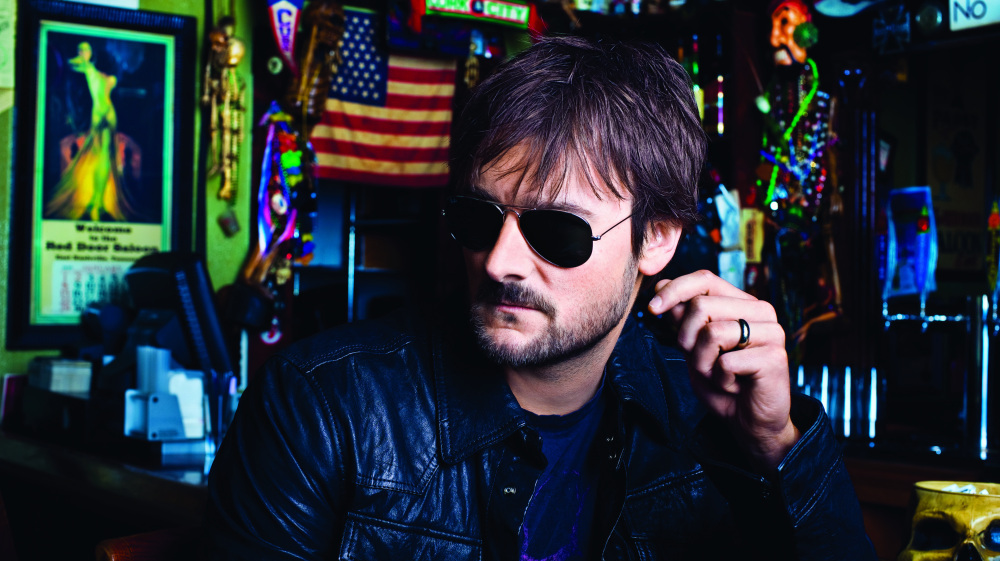 Eric Church, whose Chief topped the Billboard 200 album chart last week and is joined in the top 10 this week by three other country albums.

The final scene in the most climactic episode thus far in the new season of the HBO swamp magic series True Blood really called out for a country song. The lonely vampire king Bill stood alone on a rustic Louisiana porch, pondering his decision to surrender his romantic claim on the fetching fairy, Sookie. Shots of Bill moping were intercut with scenes of the Sookie and Bill's rival, Eric, consummating their love.

As sex and sullen misery alternated onscreen, Neko Case's "I Wish I Was the Moon" played in the background. Case is a queen of the esoteric realm sometimes dubbed Americana, and her lonesome wanderer's wail well suits the knowingly florid True Blood mood. The song's lyrics, about being tired beyond mortal limits, certainly complemented Bill's Arthurian predicament. It was an apt selection by series music supervisor and KCRW DJ Gary Calamar.

Yet maybe because I'd spent the week listening to a different kind of country music (different on the surface, anyway) I wished for that moment to be defined by something with a deeper twang. It seems to me that the vamps and tramps of Bon Temps would hear their workaday lives reflected in the work of young Nashville stars like Eric Church, Miranda Lambert, Blake Shelton or Jason Aldean — music as preoccupied with family tradition, genre restrictions and the careful deployment of clichés as is Alan Ball's archly trashy show.

Hollywood product that it is, True Blood engages in an ongoing cultural conversation about the contemporary South, where family legacy is both a burden and a power source, and long-held notions of purity and moral rectitude are constantly being undermined by unexpected intimate alliances. This isn't a new story. It's the one that's been at the heart of country music ever since Jimmie Rodgers sat down with the Carter Family in front of Ralph Peer's Victor Talking Machine in Bristol, Va., in 1927.

And it's being retold again in Nashville this year, where most of the best-selling artists are neo-traditionalists who seamlessly integrate current styles and attitudes into classic approaches. Of this year's best-selling artists, three are relatively young country acts coming into their own on their third or fourth albums. Aldean is the exemplar of an updated take on rural roughneck that treats melding rap, hard rock and outlaw country like it's no big thing. Church writes drinking songs that celebrate debauchery and mourn its aftermath in equal measure, in a style that embraces bad jokes and psychological depth. Blake Shelton, the best-groomed and most accessible of the bunch, is a good/bad boy whose Red River Blue album melds contemporary Christian ballads with swaggering sexiness. This new guard isn't changing country so much as making the genre comfortable with the cultural shifts that have inevitably affected even the most traditional aspects of people's lives.

Church, whose latest album, Chief, unexpectedly grabbed the top spot on Billboard's album chart last week, leads off the release's first single, "Homeboy," with a shout out to a straying brother. "You were too bad for a little square town, with your hip-hop hat and your pants on the ground," drawls the North Carolina, singer before urging his prodigal sibling to head back to the farm. Invoking hip-hop as a source of rebellion as naturally attractive to a white southerner as anything Hank Jr. ever had on offer, "Homeboy"'s portrayal of small town life is as believable as it is picturesque.

Yet if that Yelawolf-like homeboy did return, he'd likely be greeted by the sound of Aldean's smash "Dirt Road Anthem" (written by country rap-rock up and comers Brantley Gilbert and Colt Ford) pouring out the window of a Chevy Silverado. The song name-checks George Jones, but also features Aldean taking a stab at rap, and in the remixed version, handing a verse to fellow Georgia native Ludacris.

Part of a generation of artists that are more personally and artistically conservative in some ways than their immediate predecessors like Brad Paisley and Keith Urban and more forcefully connected to Southern and rural ideals than are crossover princesses Taylor Swift and Carrie Underwood, these stars of the new hard country are exploring what it sounds like to strongly embrace tradition while still giving room and respect to the influence of game-changers like Tim and Faith, the Dixie Chicks and Kid Rock.

Miranda Lambert has acknowledged in interviews that people expect her and husband Blake Shelton to fill the shoes of Tim McGraw and Faith Hill. Yet while Tim and Faith were part of the same acknowledgement of country's suburban (and even sometimes Democrat) fan base that made stars of Garth Brooks and Shania Twain, Miranda and Blake present themselves as self-styled rednecks, fond of hunting and drinking whiskey and going to church (even with a hangover). Shelton may have gone Hollywood as a judge on the reality show The Voice, and Lambert got her start as a finalist on Nashville Star, but the couple has managed to retain a dusty aura of back-road authenticity more effectively than any country star since George Strait.

How do they do it? How does Aldean, who sports an earring and recorded a hit duet with American Idol Kelly Clarkson, still manage to claim red clay Georgia bona fides? And what of Church, a literary songwriter in the style of Steve Earle who's found a place in country's mainstream instead of in the more elite Americana category, where similar artists like Case dominate?

The answer can be hard to grasp for a critic like myself, adept at playing the game of musical Scattergories. But I think it's pretty natural for these artists to embody contradiction. Partly, that's because mainstream country's mandate to appeal to a wide audience demands a certain flexibility: unlike more self-consciously purist scenes, like the Americana world, Nashville encourages its artists to aim to reach fans who aren't playing by genre rules. The average country music listener also owns albums by Kid Rock and Eminem, if not Watch the Throne. The very thing that makes artists appealing to this crowd a little cheesy — showmanship and the love of a good hook — also leads them to try combinations that may seem unlikely to outsiders: hip-hop beats on a dirt road.

In the recent past, such efforts have often come across as cartoonish. The Muzik Mafia collective that includes Big & Rich, Gretchen Wilson and country rapper Cowboy Troy found success earlier this decade with florid hits that often came off as novelties. (Remember "Save a Horse, Ride a Cowboy"?) Brad Paisley, too, is a crucial bridge artist: as the country star who could do it all, from playing hardcore bluegrass to writing big pop hits to embracing Obama to extolling old Alabama, he defined the transitional period leading up to this latest phase.

The difference between a superstar like Paisley and a rising one like Aldean or Shelton isn't obvious. It comes across more in the comfort level they project being both somewhat conservative and instinctively open-minded. These new artists remind me of people I've met spending time in the South in the past few years. In certain ways, they may be conservatives, but they probably also work and live in diverse communities, teach their kids about tolerance and safe sex and would be as excited about the new Jill Scott album as they are about Kenny Chesney's latest. Normal life, for them as for most Americans, is a mix of things not well defined by a particular ideology. That's what I hear in the new country, too.

Talent helps the best of these new artists embrace the multiple perspectives that might otherwise make their music awkward. Church writes some of the most sophisticated honky-tonk songs to hit Nashville in years, and Lambert, for all her gun-toting brio, brings a complexity to her good/bad girl persona that makes her infinitely relatable. Hell on Heels, Lambert's forthcoming album as one-third of the Pistol Annies, teams her with songwriters Ashley Monroe and Angeleena Presley on songs that deftly express what it's like for a woman to try to find herself within today's confusing blend of liberation and lingering stereotypes.

Musically, Hell on Heels is pretty old school, full of close harmonies and twangy guitars, owing a debt to both the Dixie Chicks and the classic trio of Dolly Parton, Emmylou Harris and Linda Ronstadt. The themes the three women pursue in songs like "Housewife's Prayer" and "Trailer for Rent" will be familiar to anyone who loves legendary chroniclers of the Southern feminine position, like Loretta Lynn or Tammy Wynette.

What makes Hell on Heels stand out is the way Lambert and her partners use small details to capture the way life's unexpected turns challenge old ways. The pregnant bride in "Beige," the pill-popping mom in "Housewife's Prayer" or the hell raiser with a good head on her shoulders in the title track could hail from any moment in country music's past half century. Yet something in their diction makes these characters contemporary, as they struggle to figure out how self-empowerment fits in with family values and feminine ideals. Sookie Stackhouse would understand: this is how old ways shape-shift into something new.