Accessibility links
Songs Of The Summer: 'Party Rock Anthem' : The Record The year's biggest hit exists for a single purpose: to embed its big dumb hook deep in your brain. 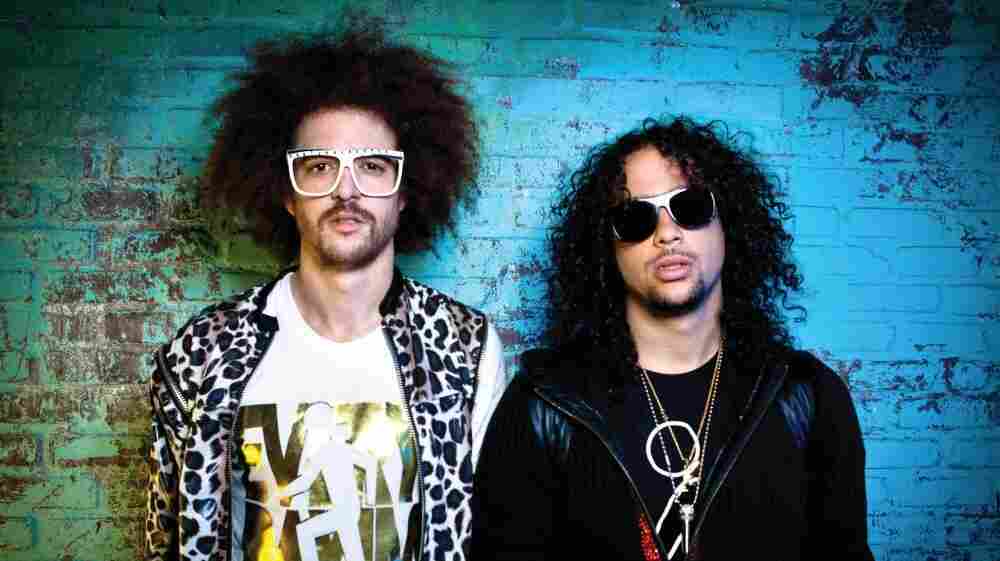 LMFAO (Redfoo on the left, SkyBlu on the right), so named because the response of SkyBlu's grandmother to their original name, Sexy Dudes, was, "LMFAO. Are you serious?" Stephanie Ma/Universal Records hide caption 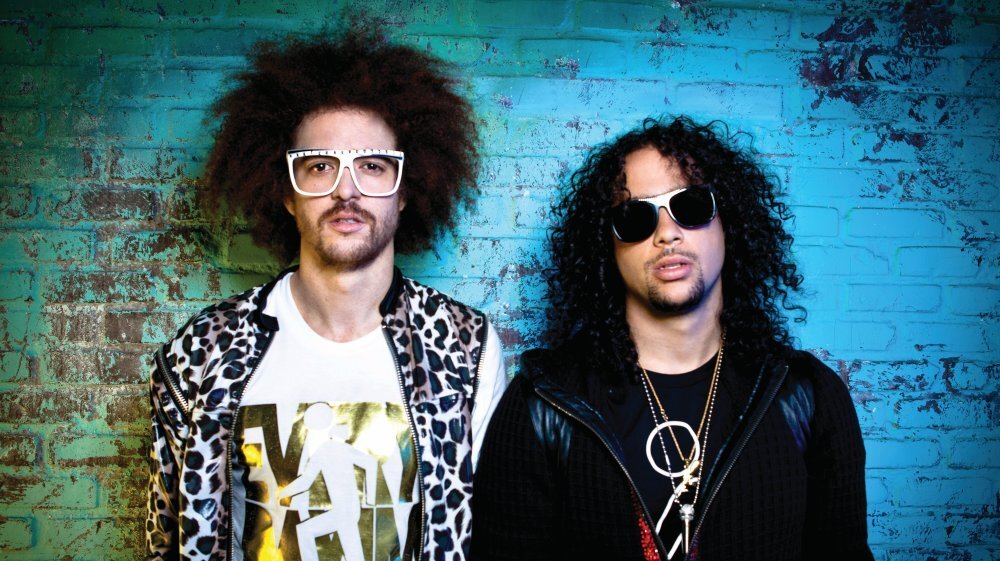 LMFAO (Redfoo on the left, SkyBlu on the right), so named because the response of SkyBlu's grandmother to their original name, Sexy Dudes, was, "LMFAO. Are you serious?"

Ladies, gentlemen, party rockers: no disrespect to "Pumped Up Kicks," but the indisputable song of the summer for 2011 is LMFAO's "Party Rock Anthem."

Songs Of The Summer: 'Pumped Up Kicks'

Summer is always a time to think about, and write about, pop music, not just to listen to it. But 2011 yielded an unusually bountiful crop of think pieces about what pop means now: there was the one that worried that pop doesn't mean as much as it used to; the one that said that it's impossible to know what pop even means; the one that set out to determine what it takes to be popular; there was that psychological study about narcissism made everybody scratch their heads a little bit; the one that argued that narcissism in pop isn't such a bad thing; there was a raft of responses to a book about our current obsession with all things "retro" and finally this week a piece by the author of said book that argues that our retro obsession neuters current music of the chance to make something great of itself.

But the dumb fun of a big hook and a silly dance trumps heavy thinking, and as quietly as a song anchored by a bleating siren can, "Party Rock Anthem" offered an antidote to nearly all of these anxieties.

This is a song that explicitly wants you to take a vacation from your problems, relax your critical muscles, dance together like it's no big deal: "Everybody just have a good time," "We gon' make you lose your mind" and a three-word mantra more crucial to its song's message than any other phrase in pop music this summer: "Hating is bad." It's simple economics: during the summer, your time is less valuable because there's so much more of it, so you're open to the idea of a piece of art (see also: beach reads, blockbuster movies) having no redeeming value.

Not everybody listens. In July, Rob Walker complained in The New York Times Magazine that pop's meaningfulness has shriveled as consensus has splintered. In the piece, Walker recalls listening to "American Top 40" as a kid, but when he returns to the countdown as an adult, he recognizes nothing.

"All those common pop-culture reference points we used to coalesce around — for example, the inescapable No. 1 hit of the summer — now prove ever harder to come by," Walker wrote. Leaving aside the bizarre idea that the pop chart would hold meaning for person who long ago stopped listening to pop music, "Party Rock Anthem" still rebuts Walker's claim convincingly (as do the inescapable hit singles of the last few summers).

"Party Rock Anthem" won the crown handily, spending the entire summer in the top 10. But the song was released back in January, and built its dominance slowly. The video appeared in March. The song first charted on the Billboard Hot 100 on April 16, at No. 88. By the time LMFAO's album, Sorry For Party Rocking, dropped on June 21, the song had ticked into the top 10; on July 16, after 15 weeks on the chart, it hit No. 1. It stayed there until last week, when it was bounced one spot down by Katy Perry's "Last Friday Night (T.G.I.F.).

In late July, Stefan Gordy told NPR that the goal was always, "We gotta get to No. 1. So when we were mixing this song, we spent about two weeks. And it was, 'What's gonna capture the world? What's gonna be a little different?' But I still feel slightly surprised."

Despite the slow growth, "Party Rock Anthem" felt like an out-of-nowhere song for many industry watchers too, and one that nobody really seemed to want to anoint. That's surely due in part to mediocre sales for Sorry For Party Rocking, but whatever the factors, the song became a sneak-attack, a lightweight piece of fluff that seemed like a placeholder number one until something more predictably epic came along (Lady Gaga, Katy Perry, Beyonce: you all had your chance). It also came calling with an un-fascinating circular puzzle. What is party rock? Something that a party rocker does. What is a party rocker? Someone who rocks a party. What do you need to rock a party? A party rock anthem. Don't be stupid.

Not that there's really anything at stake in hammering that definition down. Forget nailing Jello to a wall; "Party Rock Anthem" is like smoke. The song's power its ability to dissolve and reform itself into rap, into club music, into bubblegum, from one moment to the next.

Or maybe some kind of aerosolized bio-sonic weapon, implanted with its own warning siren. If other songs of the summer were manifestations of our confusion, "Party Rock Anthem" knows itself perfectly. The dudes in LMFAO, like their buddy Ke$ha, have a sense of humor: In he video for their song, the weirdly interchangeable Redfoo (a.k.a. Stefan Gordy — he's taller, wearing spandex) and SkyBlu (a.k.a. Skyler Gordy — he's stockier, in sunglasses and glitter) wake up from comas to discover that the song itself has literally become infectious, turning the unlucky masses into grinning, dancing zombies dressed for a Halloween rave hosted by the local mall. It's like a remake of Dawn of the Dead with a surprise guest appearance by Robin Sparkles.

One of the tiny, harmless secrets that has helped keep the music industry alive at all points on the scale — from the domination of huge pop acts to the survival of tiny indie bands — is that the process (and it is a process, in that time passes as you listen and you are a conscious and responsive entity) of listening to tonal music is pleasurable, and more so if you repeat that process. For indie acts, the glut of the marketplace requires commitment (read: repeated plays) to a particular band on the part of listeners, or a label, for that band to rise above the fray. Repetition feeds comfort. It may be increasingly impossible to dig every buzz band, but pick one at random and really commit, listen a bunch of times, and you'll probably find something to love about them. (Entire schools of criticism, not to mention Internet metrics wars, seem to be based on this theory of accessibility.)

For the big pop acts, success depends upon the enforced familiarity that comes with insane levels of repetition. (It's so crucial to the success of a song, in fact, that the industry is willing to pay millions for it. In my colleague Zoe Chace's story on the cost of a hit song, a manager for two of Rihanna's songwriters chalked up the high cost of promotion to the need for "everything to click at once. You want them to turn on the radio and hear Rihanna, turn on BET and see Rihanna, walk down the street and see a poster of Rihanna, look on Billboard, the iTunes chart, I want you to see Rihanna first." )

Give a song a few moments of your time, and it will become more tolerable (maybe even lovable) to you. "Party Rock Anthem" has thrived on this latter arrangement. The difference between indie and Billboard Hot 100 success is the necessary buy-in of people who don't have a lot of time to lend to a song, simply because there's always another one demanding airplay. Which is where the hook comes in. And say what you will about "Party Rock Anthem," but it features a hook that is designed to do one thing: burrow it's way into the deepest part of your brain.

All of which is to say that "Party Rock Anthem" is kind of a bad song, and certainly one that we could only love during the summer. It asks us to turn off the part of our brain that's critical of things like songwriting or performance or complexity, and rewards our submission by delivering its wordless hook deep into some zombie pleasure center. Remember that three-word mantra? Hating is bad. If you're here to rock the party, climb aboard. If not, give the song another spin. Maybe it'll wear you down. Or, you know, give it a few weeks. Summer's almost over.