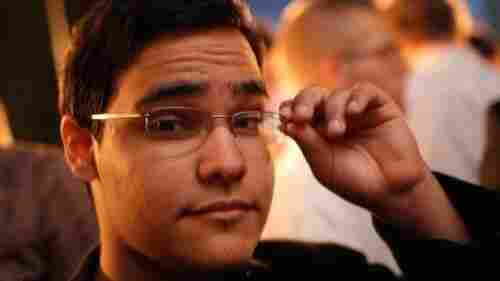 Lil Wayne released his new album, Tha Carter IV, on Monday at midnight. It's been more than three years since his last official, full-length album, the triple-platinum-selling, Grammy-winning Tha Carter III. During the drought Lil Wayne had various legal issues and served eight months in prison. But his fan base has continued to grow, thanks to his digital strategy. Part of that is providing his fans with a steady stream of leaked songs and guest verses on other musicians' songs, but the other part comes from his Facebook fan manager — 21-year-old Mazy Kazerooni.

In some ways, Kazerooni is your typical tech startup prodigy. He left high school at age 17 to work for a live video streaming platform called Ustream.

"Ustream gave me a very interesting perspective," Kazerooni says. "When you see how many viewers somebody can get on a live video stream, you can really understand how connected they are to their fans, how many they have, how much they love them. It's a lot harder to get 10,000 people to watch you at the same time then it is to get 10,000 views on a YouTube video."

Kazerooni initially set out to lure big name rappers like Lil Wayne into using the site to reach their fans. But then it turned into a side hustle--working as Lil Wayne's digital consultant, helping to grow the rapper's presence on social media platforms beyond Ustream.

"He had a million fans sitting on his page, and no one had access to it," explains Kazerooni. "No one even really knew what Facebook was, on his team. I had to argue with them for like a month to give me the information I needed to get the access."

Kazerooni multiplied the number of fans on the page to 30 million in a little over a year.

"Now, there's a lot of attention being paid to what's happening online," he says.

Joanna Dorfman is the site editor at Ustream, the startup that gave Kazerooni his first job. Kazerooni built buzz for the site by pursuing all kinds of celebrities, from bloggers to musicians, as some of its first users. He pumped up their live broadcasts on Ustream's Twitter feed. He'd slip into their chat rooms and offer tech support when they hit a glitch.

"I heard 'entrepreneurial spirit' being thrown around a lot, as a phrase, but I didn't really see an illustration of what that meant until I met Mazy. He has it," says Dorfman.

You might not expect rappers to swoon over someone like Kazerooni, a baby-faced Persian American from Orange County who didn't grow up listening to rap. But in videos posted to their Ustream channels, popular rappers like Wiz Khalifa and Lil Bow Wow sing Kazerooni's praises.

"I appreciate you, Mazy. You're like the Ustream Jesus, man, you really is. You just come out of nowhere and aaahhh...you're just going to help every celebrity on that Ustream," Bow Wow says.

Arguably, the celebrity Kazerooni's helped the most is his client Lil Wayne. As the Facebook page manager, Kazerooni strategically re-posts Lil Wayne's Twitter commentary, as well as announcements about the rapper's whereabouts.

"While he was in jail, we had an address so people could send him letters," Kazerooni says. "He'd write back to some of these letters. I would post all that stuff on Facebook. We just kept everyone engaged throughout the whole process."

That active engagement proves those 30 million fans aren't idly watching the page. And this means the page is ripe for merchandising. Few of those posts contain product mentions, but the ones that do are moneymakers.

"I do everything the management needs to make sure we're selling his products without bothering the fans," Kazerooni says.

Wayne's summer tour is promoted on his wall mostly by namechecking cities. A shoutout, for example, to Atlanta, can inspire some 7,000 comments. Wayne also hawks a brand of vanity cigars, and when Kazerooni occasionally posts about them on the page, local markets sell out.

He even won the page a Guinness World Record for the most "Likes" on a post in 24 hours.

Nishat Kurwa is a reporter for Turnstyle, a project of Youth Radio.