Accessibility links
Lil Wayne's Aggressive Softcore : The Record Is Tha Carter IV, greeted with disappointment by many, the beginning of a new phase for the rapper? 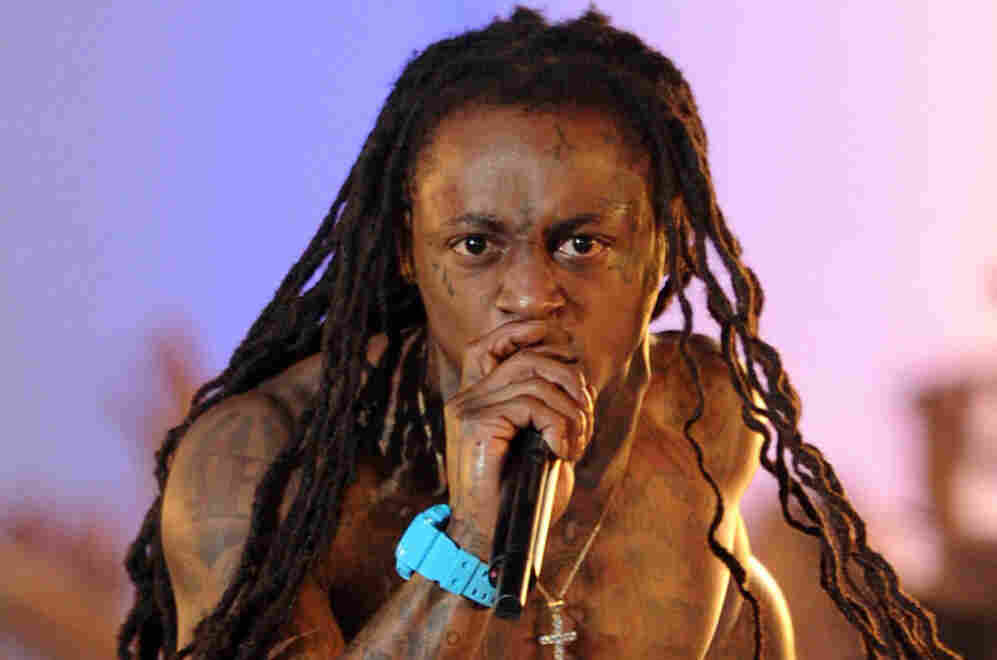 Has Lil Wayne gone soft? Tha Carter IV, his ninth album, leaked online Friday and is rapidly threatening to turn the 28-year-old rapper from a critically beloved genius child into a cultural also-ran. Wayne may still sell a huge number of albums this week — Cash Money, Wayne's home label, is hoping to move at least a million units, aided by the singles "How To Love" and "She Will," both currently holding down spots in Billboard's Top 10. But reviews so far have run from tepid to downright dismissive, and an unfocused performance Sunday on the MTV Video Music Awards is helping feed the growing sense that something has muted the spark of this boldly creative rhymer — his recent eight-month prison term, perhaps, or enforced sober living, or even the rivalrous rise of his protégé and frequent collaborator, Drake.

Contrast the regretful sighs enveloping Weezy's current efforts to the deafening roar that greeted Jay-Z and Kanye West's Watch the Throne, released earlier this month. That album has its detractors, but even the pans have gone deep, treating this collaboration between hip-hop masters as the major artistic effort it is. Yeezy and Jay's ruminations on wealth, power and semi-public sex have inspired a fascinating conversation about race and cultural power. From its gilt packaging to its sampling of soul greats, the album was presented and accepted as a valuable artifact.

Lil Wayne takes on serious themes on Tha Carter IV too, but his distinctively cagey rhetorical approach makes the meat easier to miss. "This the best-worst feeling, and ... if I die I die a death worth living," Weezy snarls on "Intro," the first track on Tha Carter IV, a breath after a break in producer Willy Will's very Kanye-esque heraldic melody line. The line's just another throwaway in a string of aggressively offensive, sometimes silly, sometimes sexist epithets. But I think it's important.

Throughout this selection of songs, Lil Wayne continually aims to return to that best-worst feeling: the point where and when pleasure and pain become confused; where the tension in a room is cut by a joke but then reassembles like a fog. It's a hangover mood, an acknowledgment of a certain powerlessness.

The skittish, provisional quality of Wayne's rhymes throughout Tha Carter IV and the subdued vocal tone he often adopts — as if he keeps slipping into a shadow — are proving disappointing to many of the critics who've cherished his outrageousness, but it's reflective of the struggle to acknowledge limits that this set represents.

Some constrictions go beyond music, like the jail time he only discusses in muttered throwaway lines and the clean living he refutes in tracks like "Blunt Blowin'." But they're also artistic. Coming off a failed attempt to cross over into rock, fitting his abilities to a blockbuster album format his many mixtapes prove he's always found restricting, Weezy is operating in an aggressively offhanded mode — repeating himself, lobbing outré couplets ("We in the belly of the beast and she thinkin' 'bout abortion") without further development, letting guests like Andre 3000 best him with bothering to reply.

Being callously casual allows Wayne to avoid really dealing with his biggest predicament: he wants to be both street and pop; to excel at guitar bluster and slow jams and hardcore rhyming; to step beyond any one role, as an artist and a person. But the world and his own preconceptions, audible in the way he keeps circling clichés about being tough, deadly and endlessly priapic, rein him in.

Fatalism is a constant element in rap, but there are different ways to play it. Bluster pushes many artists forward; others turn stoic, presenting themselves as street soldiers or Scarface-style crime bosses beyond the reach of softer emotions. Then there are the ones who kill with a smile. That's Lil Wayne. His inventiveness made him famous, as he crafted a shape-shifting persona that was part urchin, part superhero, part alien.

Yet as unique as he seemed, Weezy always strongly connected with a long-standing legacy within both hip-hop and the larger history of African-American culture, of the trickster who triumphs not through brute strength or heroism but through unpredictability and sly intelligence.

Within rap, this might be called the softcore approach, as opposed to the steely declamations of a don like Jay-Z. The artists who follow in this line are often great storytellers or humorists, with a vocal quality that's more elastic and connected to melody than it is heavily percussive. Often they're pegged as funnymen or dandies, though there's always a dagger folded into their finery.

Slick Rick, Eazy E, Snoop Dogg, Shock G of Digital Underground and Andre 3000 of Outkast are a few of the noted rappers in this line. Often they're from places other than New York: the laid-back West Coast, or the South, where elegance has always been held up as an important aspect of urban masculinity. Kanye West, who's from Chicago, has earned his top dog title partly by combining elements of this style with the more macho stance of classic "hard" rappers. In the prime that critics are now announcing as past, Wayne also went beyond the boundaries of the role, through the sheer energy of his overactive brain.

On Tha Carter IV, though, he settles into his own softness, especially as it relates to the androgyny he's also always cultivated. (What other rapper would compare his own verbal onslaught to a woman's water breaking," as he does in "Blowin' Blunts"?) Softcore rappers are always ladies' men, which doesn't mean they're anywhere close to feminists. They often play with the role of the pimp and the porno stud: the man whose power is determined by his alleged ownerhip of women. Sexual prowess is a theme often threatens to overtake everything else on Tha Carter IV, as Wayne elucidates with vulgar explicitness all the ways he can not just satisfy any woman he encounters, but almost torture her with delight.

Interacting sexually with women, in fact, is the main subject of much of this relentlessly obscene album. That the bedroom is now the primary source of energy for Weezy makes perfect sense when you consider his most successful protégés: the breakthrough female rapper Nicki Minaj, who's oddly absent from these tracks, and the heartthrob Drake, who provides a creepily seductive hook on Wayne's currently ascendant single, "She Will."

The preoccupation with women and sex on Tha Carter IV hasn't steered Lil' Wayne from the casual misogyny that's always been a downer within his music. Pimps and johns are never feminists, and Wayne hasn't yet figured out how to really go beyond those roles. He's trying, though, which is interesting: in "How To Love" he insists that the stripper who fascinates him is special, though he puts her back on the club stage in "She Will." And "So Special," which may or may not be a parody of a quiet storm seduction ballad, finds him confused by the fact that a carnal encounter has led him to actually feel something.

This album is full of halting insights, quickly discarded; it's up to Weezy to follow his own instincts toward more coherently self-confrontational work. Tha Carter IV offers a few explorations that could point him toward an interesting mature phase. Tha Carter IV does feel strangely self-limited, but it may not be because Lil Wayne is out of juice. He may still just be trying to figure out how to drink from a new source.