Accessibility links
Why Gibson Guitar Was Raided By The Justice Department : The Record Last week the government raided the Gibson Guitar Corporation for the second time in two years over allegations the company knowingly acquired wood protected under U.S. environmental law to make its instruments. 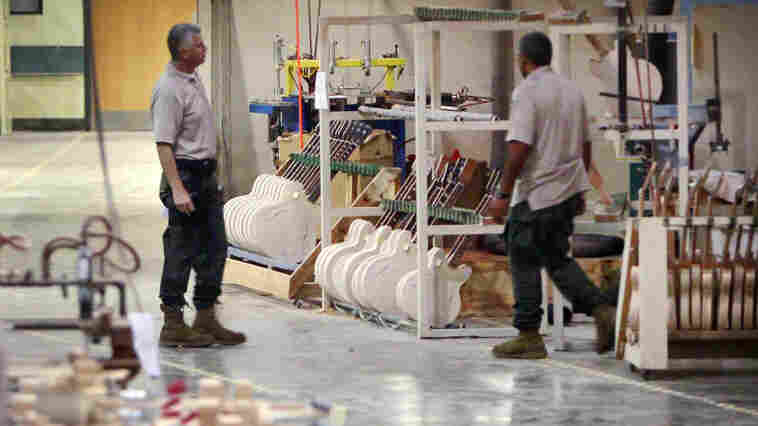 Federal investigators look through the workshop at the Gibson Guitar factory during a raid on the Memphis facility last week. Jim Weber/The Commercial Appeal/ZUMAPRESS.com hide caption 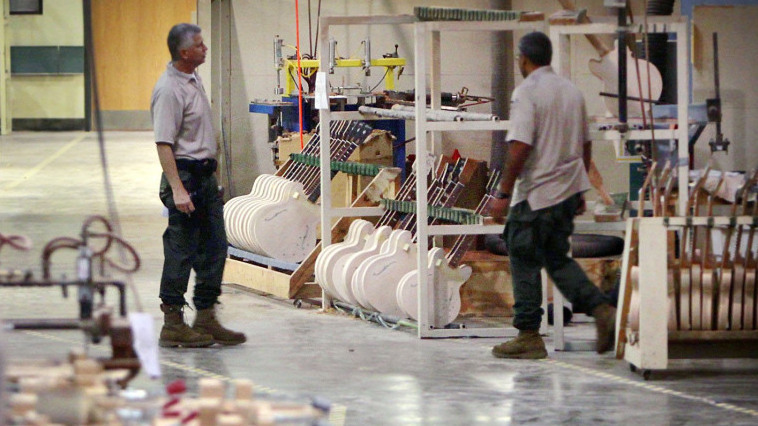 Federal investigators look through the workshop at the Gibson Guitar factory during a raid on the Memphis facility last week.

UPDATE: September 6, 2011 1:45 p.m.: Andrea Johnson, director of forest programs for the Environmental Investigation Agency, wrote to NPR to express concern over two points in this story. First, the word "verify" more accurately reflects the requirements placed on end users of endangered wood. The Lacey Act, Johnson wrote, "does not require any 'certification' at all per se. In the forestry world, 'certify' implies independent third-party certification, or government stamps, neither of which the US government recognizes as 'proof' of legality."

Johnson also says she mis-spoke when she said that Gibson "was on the ground in Madagascar getting a tour to understand whether they could possibly source illegally from that country."

"I used 'illegally' when I meant 'legally' in talking about the trip to Madagascar," she writes. "I didn't realize I'd done this until I was listening to the piece. I really wanted to be clear: the objective of that trip's organizers was to look into whether there were opportunities for 'good wood' sourcing, and in the end after seeing the risks, only Gibson continued to purchase."

Last week federal marshals raided the Gibson Guitar Corporation in Tennessee. It wasn't the first time. The government appears to be preparing to charge the famous builder of instruments with trafficking in illegally obtained wood. It's a rare collision of music and environmental regulation.

In the hottest part of an August Tennessee day last Thursday, Gibson Guitar CEO Henry Juszkiewicz stood out in the full sun for 30 minutes and vented to the press about the events of the day before.

"We had a raid," he said, "with federal marshals that were armed, that came in, evacuated our factory, shut down production, sent our employees home and confiscated wood."

The raids at two Nashville facilities and one in Memphis recalled a similar raid in Nashville in November 2009, when agents seized a shipment of ebony from Madagascar. They were enforcing the Lacey Act, a century-old endangered species law that was amended in 2008 to include plants as well as animals. But Juszkiewicz says the government won't tell him exactly how — or if — his company has violated that law.

"We're in this really incredible situation. We have been implicated in wrongdoing and we haven't been charged with anything," he says. "Our business has been injured to millions of dollars. And we don't even have a court we can go to and say, 'Look, here's our position.'"

The U.S. Justice Department won't comment about the case it's preparing, but a court motion filed in June asserts Gibson's Madagascar ebony was contraband. It quotes emails that seem to show Gibson taking steps to maintain a supply chain that's been connected to illegal timber harvests.

Andrea Johnson, director of forest programs for the Environmental Investigation Agency in Washington, says the Lacey Act requires end users of endangered wood to certify the legality of their supply chain all the way to the trees. EIA's independent investigations have concluded that Gibson knowingly imported tainted wood.

"Gibson clearly understood the risks involved," says Johnson. "Was on the ground in Madagascar getting a tour to understand whether they could possibly source illegally from that country. And made a decision in the end that they were going to source despite knowing that there was a ban on exports of ebony and rosewood."

Gibson vigorously denies these allegations, maintaining that all of its purchases from Madagascar have complied with U.S. and Malagasy law. A company attorney says Gibson has presented documents to support that claim and that the recent raid seized legally obtained wood from India. He adds that the company stopped importing wood from Madagascar in 2009.

Chris Martin, Chairman and CEO of the C.F. Martin Guitar Co. in Nazareth, Pa., says that when he first heard guitars built from Madagascar rosewood, he dreamed it might be the long-sought substitute for Brazilian rosewood, whose trade was banned in the 1990s due to over-harvest. Then the situation in Madagascar changed.

"There was a coup," Martin says. "What we heard was the international community has come to the conclusion that the coup created an illegitimate government. That's when we said, 'Okay, we can not buy any more of this wood.'"

And while some say the Lacey Act is burdensome, Martin supports it: "I think it's a wonderful thing. I think illegal logging is appalling. It should stop. And if this is what it takes unfortunately to stop unscrupulous operators, I'm all for it. It's tedious, but we're getting through it."

Others in the guitar world aren't so upbeat. Attorney Ronald Bienstock says the Gibson raids have aroused the guitar builders he represents because the Lacey Act is retroactive. He says they're worried they might be forced to prove the provenance of wood they acquired decades ago.

"There hasn't been that moment where people have quote tested the case. 'What is compliance? What is actual compliance? How have I complied?' We're lacking that."

He's even warned clients to be wary of traveling abroad with old guitars, because the law says owners can be asked to account for every wooden part of their guitars when re-entering the U.S. The law also covers the trade in vintage instruments.

Nashville's George Gruhn is one of the world's top dealers of old guitars, banjos and other rare stringed instruments. "It's a nightmare," he says. "I can't help it if they used Brazilian rosewood on almost every guitar made prior to 1970. I'm not contributing to cutting down Brazilian rosewood today."

Gruhn acknowledges that the government has tried to create exemptions to cover vintage instruments. But he says they are rife with delays and to play it safe he's nearly eliminated the 40% of his business that used to deal with overseas buyers. "This is a new normal," says the EIA's Andrea Johnson. "And it takes getting used to."

Johnson defends the Lacey Act and the government's efforts to enforce it. "Nobody here wants this law to founder on unintended consequences," she says. "Because ultimately everybody understands that the intent here is to reduce illegal logging and send a signal to the markets that you've got to be asking questions and sourcing wood in a responsible way."

What constitutes that responsible way may only become clear when the government finally charges Gibson and the company gets the day in court it says it wants so badly.