Accessibility links
Turning 'Rolling In The Deep' Into A Summer Jam : The Record Adele's monster hit came out in November, but once summer hit, it found huge success as the raw material at the root of countless remixes, and DJs played versions of the song for festival crowds for the entire season. 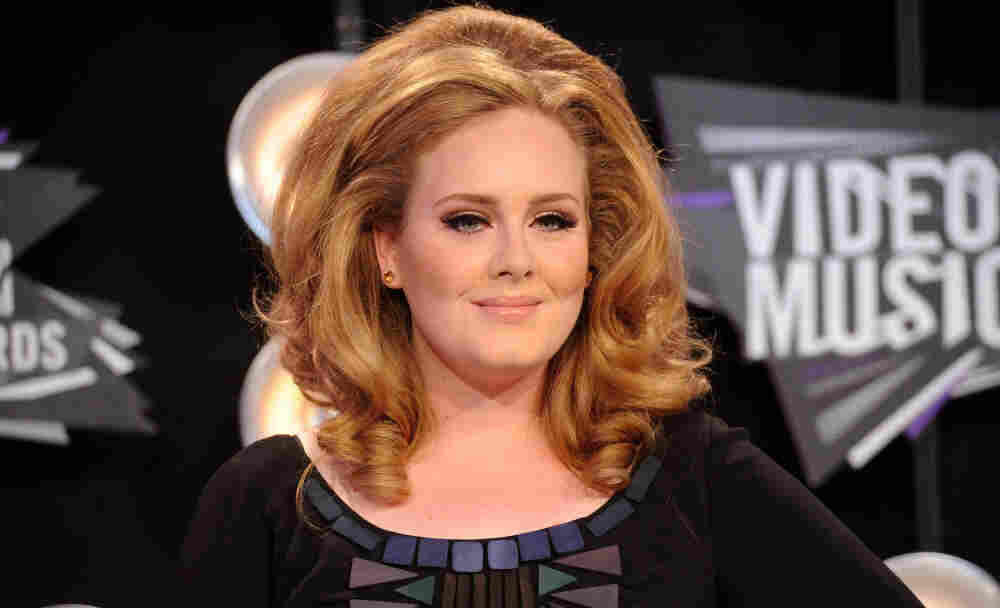 "Rolling In The Deep" came out last November, not when summer jams usually get released, but Adele's monster hit didn't reach its peak popularity until the summertime. The song hit No. 1 on Billboard's Hot 100 chart in May, and stayed there for seven weeks straight.

By now the music video for the song has over 123 million views on YouTube. YouTube trends manager Kevin Allocca says that it took some time for the song to gather steam. "If you look at the chart of how the views spread for that video, it wasn't until the summer that it really took off," Allocca says. "As opposed to a lot of other videos that can start off big and then taper off, or start off big and remain huge, it really grew gradually."

More Songs of the Summer

Part of what makes the case for "Rolling In The Deep" as the song of the summer is the number of people who danced to it. It may not be the first thing that comes to mind when you think of a dance track: Adele's vocals, rather than any type of groove, are the focal point, and they lay long and heavy over a relatively flat bass kick. But that's partly what makes it such a great song to remix. The production is sparse, leaving ample room to work around her powerful voice.

This summer, at electronic music festivals across the country, Adele's voice rang out strong time and time again. Alastair Duncan, a publicist for DJ Kaskade, told me this week that at every major music festival he went to this summer, he heard countless versions of the single from Adele's second album, and in July MTV reported that Steve Angello, David Guetta, Laidback Luke, DJ Chuckie and Avicii all played takes on the song at the Tomorrowland Festival.

One of the earliest of remixes of the song was made by Liam Dirlam, a producer who goes under the alias Voodoo Farm. Dirlam loved the original, but wanted to make something more fit for a summer dance party.

"Summer jams have to be danceable," he says. "You think about the summer, everyone is happy, tan, they have time off to go on vacation, you want music that's going to be a soundtrack to your life during that time. Whatever makes you excited or happy in the moment, or has the girl next to you singing at the top of her lungs, that's what you want in a summer song. I think I did that with this."

LANGUAGE ADVISORY: This video contains language that some viewers may find offensive.

Dirlam has been playing his hip-hop infused version of the track all summer; he sat down with me to talk about the process of turning Adele's song into a dance track.

"When you're in the remixing game you look for certain things in a song. Certain songs have a lot going on in them that are really hard to eliminate when all you want is the vocal sample or basic idea," Dirlam says. "Rolling In The Deep" is perfect remix fodder because, as Dirlam explains, the song, as produced by Paul Epworth*, is stripped down to the basics. "Here you have claps, guitars, bass, piano, her voice, and that's it."

Dirlam says the first thing he did was to learn the song on the piano. "It evolved from there," he says. "I started using synthesizers, making all these crazy noises and getting weird with it. Then I took the original and took things out that I didn't want. For this song we didn't have an a capella to use, and I just wanted her voice, so to start I had this drum kick that I wanted to eliminate. So I get on the equalizer and take out the low end frequencies, and turn up the higher frequencies to accentuate her voice."

From there Dirlam used heavy bass lines, gliding synthesizers, verses lifted from rappers Jay-Z and The Notorious B.I.G., and the production software Ableton Live to construct the remix.

Dirlam walked us through all the changes he made to the original version of Adele's hit, and provided audio snippets of the unmixed elements in the remix. Here's his breakdown of what he added to the song in his remix, and how each piece changed the original.

0:01 — "Here you can hear just the pianos. I got my lower chords rocking, and there's two tracks of piano."

0:18 — "Now I'm switching it up; I'm poppin' it, you know. Giving it a choppier piano part, eventually I glide the pianos into a synthesizer sound. They're playing the same thing but the sound actually changes."

0:35 — "You can kind of hear now the [piano] sound is bouncing in the ears, left and right. It's becoming a synthesizer horn sound."

0:41 — "Now I'm bringing up another sound in the back, along with these white noise snares that are coming on the end of it."

0:50 — "I got her voice on heavy reverb right now creating that sound texture, and I'm bringing that noise up up up ..."

1:04 — "Here, what I got going are my kicks and my snares. And I got my deep analog sound bass blipping, but I also have a mid-tone texture, a bass line in the middle."

1:22 — "I just switched it, I got a dubstep thing going in the background but it's a little more subtle. If you listen you can also hear her voice in the background, in the other ear I got little tapping pianos on heavy delay."

1:40 — "Now I switch it here again. Everybody really likes this bass line, just a deep round open thing."

2:05 — "The night before I released this I was just messing around with these samples and I put them into the song. My roommate walked by and I was like, 'Does this sound cool?' and we both kind of went, 'Yeah!' Not everyone likes rap music, but I like it, and I got the same feeling from this Adele song as when I heard Biggie's first album, so it just felt right. What I tried to do is make it sound like Biggie and Jay-Z were rapping off of each other, I took the last word off of these two different songs, 'Nasty Boy' and 'Encore,' and tried to make it seem like they were going off of each other."

2:25 — "So now this is just a completely different sound. I came up with it on a different night. I was in a different vibe, a different zone, and added it two days later. There's a lot of electric pianos and percussion — happy-sounding, open things. Part of me was afraid that I would lose people during this part of the song; people that really want that nastiness all of the time. But I think it's a beautiful oasis in the middle of this song, the clouds separate and the sun comes out for a second, and this is that moment before it gets back into the storm."

3:22 — "Here you can hear Puffy's voice in the background [of the Notorious B.I.G. track] cuz I couldn't get it out. I would have if I could have. And then I take it right back to that first part."

Puffy in the Background

"When I make these songs," Dirlam says, "I can only listen to it so many times before I start second guessing myself and I think, 'Is this really how it should sound, is this even cool?' I trashed something like a hundred ideas when I was writing this. But when I saw how happy it made people and how it brought people together, I was like, 'This is why I got into electronic music in the first place.'"