Accessibility links
'Who Here Doesn't Know About It?': On Stage After Sept. 11 : The Record Just like us, musicians didn't know what to do. What they sang and said on stage varied greatly. 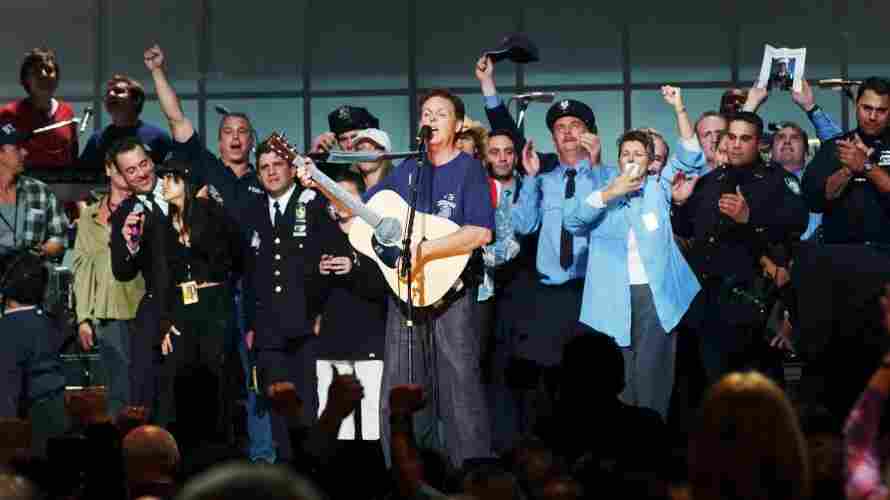 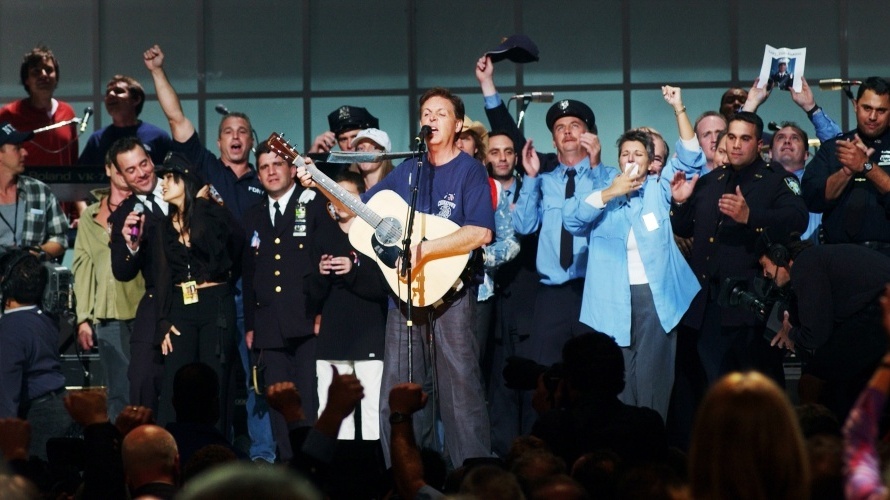 Paul McCartney (center) and other participants, including rock stars, actors and firefighters, sing during the finale of the Concert For New York City at Madison Square Garden on Oct. 20, 2001.

Yesterday, Ann Powers wrote about the experience she — and others like her — had when they began venturing back into clubs in the weeks following Sept. 11. Live music was a part of beginning to feel normal again, Ann writes: "Those of us who crave music knew that things wouldn't begin to feel even close to right until we could stand in a crowd with amplified sound crashing into us."

It's difficult to imagine what it must have been like to play to those crowds, to talk to them. In the comments section of Ann's post, Eric Harvey wrote,

"David Byrne, at the Murat Theatre in Indianapolis, 9/16/01. Toward the end of the set, he told the crowd that (I'm paraphrasing, but it's pretty close) 'This is both the least and most appropriate time to play this song,' then launched into 'Life During Wartime.' I still get weird chills thinking about that."

Musicians didn't know what to do any more than we did. Still, we asked a lot of them. We needed them to do their jobs as if nothing had changed, and we watched them intensely, to see if old songs could tell us something about a world that was so suddenly new and different.

Ten years later, some of the aesthetics or meaning of their actions don't make much sense, but they still tug us back toward the awkwardness of the moment and of the real variety of responses to it: Some of us, when we get knocked down, attempt to express our invincibility. Some of us, in moments of pain, look for comfort. Some of us can't hide our confusion. Some, surrounded by chaos, seek stability in stage-managed emotion.

We picked out a few examples.

A note: these are recordings of live performances; a few contain language that may offend some listeners.

"Four jets. One crashed into the Pentagon, two crashed into the World Trade Center. One got shot out of the sky by the Americans. You're saying it crashed as well? So that's why, um, things are a little bit mute tonight. I'm sorry 'bout that."

"This was supposed to be a very joyous occasion tonight. Because of the horrific events of today, it simply can't be a joyous occasion. It's difficult for all of us. I'm angry, I'm confused, I'm frightened, and I don't really want to give this meaningless act of violence any credence. It's totally and utterly pointless. We'll sing this song for those people who have lost their lives. Thank you."

"Ladies and gentlemen, we are here tonight and we must remember that music is one of the beautiful things of life, so we have to try to keep the music alive some kind of way and maybe music can help. I don't know, but we have to try something these days."

"What we are doing is in the spirit of this tragic time. Unity through music is now the message and we can use our sounds to help underscore the long healing process that must take place. I am honoured to be doing the Last Night. Maybe more than ever."

-Conductor Leonard Slatkin, to The Guardian, on the changes to the normally patriotic climax to the annual BBC Proms concerts, which were scheduled for Sept. 15, 2001.

"It's a prayer for our fallen brothers and sisters."

-Bruce Springsteen, introducing "My City of Ruins" during the America: A Tribute to Heroes telethon, broadcast on Sept. 21, 2001.

"Bootleggers, bombin', Bin Laden
I'm still crackin'
I will not lose
I simply refuse
I dropped the same day as the Twin Towers
I show power
Still, I show compassion for others
Send money and flowers
Devote hours"

"My dad was a fireman in World War II, in Liverpool, which took some heavy bombing, so I'm proud of him tonight. I'm proud of all you guys, the Port Authority, the cops. I'm proud to be wearing this t-shirt, which came from one of the guys who survived the twin towers."

-Paul McCartney, from The Concert for New York City at Madison Square Garden on Oct. 20, 2001.

"Then I'm laying out my winter clothes
And wishing I was gone
Going home
Where the New York City winters aren't bleeding me
Bleeding me, going home"

Correction (Sept. 10, 2011): An earlier version of this post quoted Thom Yorke as saying, "You don't know about the Arab planes in America?" We've listened again and corrected our transcription.