Accessibility links
The Influence Of Bill Monroe On A Half Century Of American Music : The Record On the occasion of his centennial, a fan looks back at Monroe's influence over rock 'n' roll, bluegrass, and the music industry itself. 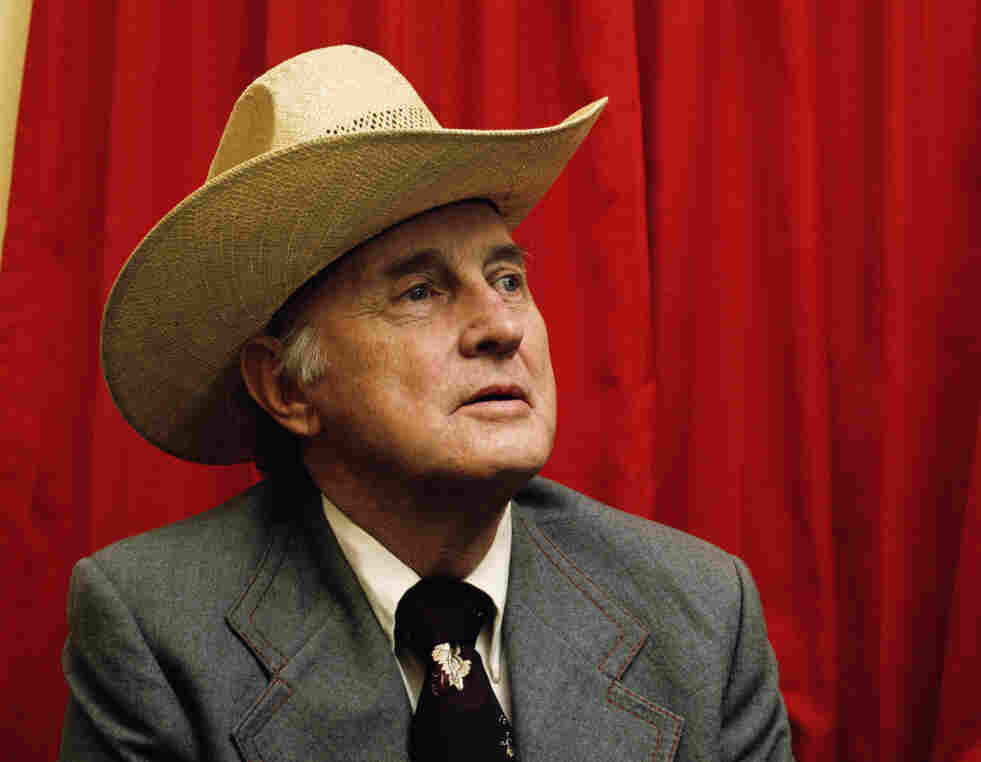 Bill Monroe, known as the "Father of Bluegrass Music", was not only the creator of a new style of country music, but should perhaps be considered one of the most influential and important figures in the history of American music in the 20th century.

Why is Monroe, whose centennial we celebrated this week, so influential? One word — ELVIS. The coming of Elvis Presley in 1954 and the birth of rock and roll was a major turning point in American music in the mid 20th century. The B-side of Elvis's first Sun records single was a revved up, 4/4 time version of Bill Monroe's "Blue Moon of Kentucky." If this first single ("That's All Right Mama" was the A-side) is in fact the "Big Bang" (or at least one of the bangs) of rock and roll, consider if Elvis had never listened to or been influenced by Monroe's music. That first single exploded – imagine how many people heard it.

Bill Monroe and the Blue Grass Boys first recorded "Blue Moon of Kentucky" in 1946 as a slow country waltz. Along with Monroe on mandolin and lead and tenor vocals, the Blue Grass Boys of this period (1946-1948) consisted of Lester Flatt, guitar and lead vocals; Earl Scruggs, banjo and baritone vocals; Chubby Wise, fiddle; and Howard Watts, string bass and bass vocals. This particular configuration created and developed the instrumental and vocal styles that have come to be called "Bluegrass music."

Monroe used the mountain fiddle music he learned as a boy from his uncle Pendleton Vandiver, and added elements from blues, gospel and swing music. He pushed the tempos faster, played in keys that were unheard of in country music, sang higher, and gave the music a professional, precise and polished sound and look.

In September of 1954, less than 2 months after the release of Elvis's "Blue Moon of Kentucky," Monroe covered his own song. The "cover" featured triple fiddles played in harmony, stating the opening melody in 3/4 time. In the middle of the song, the tempo changes to a fast 4/4 time, an obvious nod to Elvis's version. Elvis later performed the song on the Grand Ole Opry and reluctantly sought out Monroe to apologize for changing his song. Monroe, known to be a stern and aloof character, was pleased that Elvis had recorded his song. He was also quite happy and proud of the songwriting royalties it brought to him. He was known to have remarked on many occasions, "Them was powerful checks".

Monroe also helped give new life to his chosen instrument. The mandolin boomed in popularity from the early 1900s to the early 1920s. Mandolin orchestras and string ensembles were common, playing classical and popular music. But by the early 1920s, that boom had busted and the 4-string banjo began to take over the popular music scene — since it was loud and could be heard as a rhythm instrument in the new horn based jazz bands that were beginning to form. The mandolin was still heard in southern string bands backing singers and occasionally as a lead instrument. Ironically, during this same time period (roughly 1922-1924), the Gibson company of Kalamazoo, MI, introduced a revolutionary new design to their mandolin line - under the supervision of Lloyd Loar, an acoustical engineer, and classical mandolin virtuoso. The Gibson F-5 model was patterned after a violin, with an arched and carved top and back (rather than flat), f-holes (rather than a single oval hole), and a longer neck (15 frets to the body, rather than 12). These instruments were designed to be easier to play — with a thinner, more tapered neck — and they produced a rich, powerful sound — perfect for playing concertos in unamplified concert halls. The only problem was that the instruments did not sell well and were not embraced by the very players for whom they were designed. Gibson summarily fired Loar in December, 1924.

Some time in 1945 — at a barbershop in Florida — Monroe came by what was then a 22 year old, used Gibson F-5 mandolin, signed by Lloyd Loar and dated July 9, 1923. Monroe purchased the instrument for $125, and immediately found it superior to the Gibson F-7 he had used for almost 10 years. The tone and volume of this "new" instrument inspired Monroe. It was loud enough to be heard easily above the other four instruments in the Blue Grass Boys and helped Monroe to further develop the rhythmic "chop" on the "off" beats (much like a snare drum functions in a rock band: 1 chop 2 chop 1 chop 2 chop, etc.), which reinforces the drive and power of the music and set it apart from other styles of country music at the time. Today, the F-5 design is still used by Gibson and other firms, as well as by many skilled luthiers around the world. Some of these F-5 models from the years 1923-1924, with Loar's signature on the label, currently sell for well over $200,000.

I only got to see Bill Monroe and the Blue Grass Boys perform once. It was at a festival in Illinois, where I grew up, in the summer of 1981. Monroe had just released an all-instrumental album called, "Master of Bluegrass." I don't remember much about the performance, but I do remember that when his bus rolled into the festival grounds, the crowd got excited. I was just as excited to hear my fiddling hero, Kenny Baker, who was a prominent member of the Blue Grass Boys at the time. I got Monroe's autograph. When I was growing up, it certainly was not "cool" among my peers to like country music, let alone something as twangy and strange sounding as bluegrass. But I liked it, and have been listening and trying to play it ever since. I guess one of the things about Bill Monroe that I admire and can relate to is a certain degree of stubbornness of character. He was determined to be different, determined to stick with his vision, and determined to be the best in everything he did.