Accessibility links
Band Together: Documentary Tracks Pearl Jam's 20-Year Run : The Record A new documentary by Cameron Crowe looks back at what made Pearl Jam, despite the odds stacked against it — a ridiculous name, a drug fatality, a shy frontman and a major label contract in an anti-corporate era — outlast almost all of its peers. 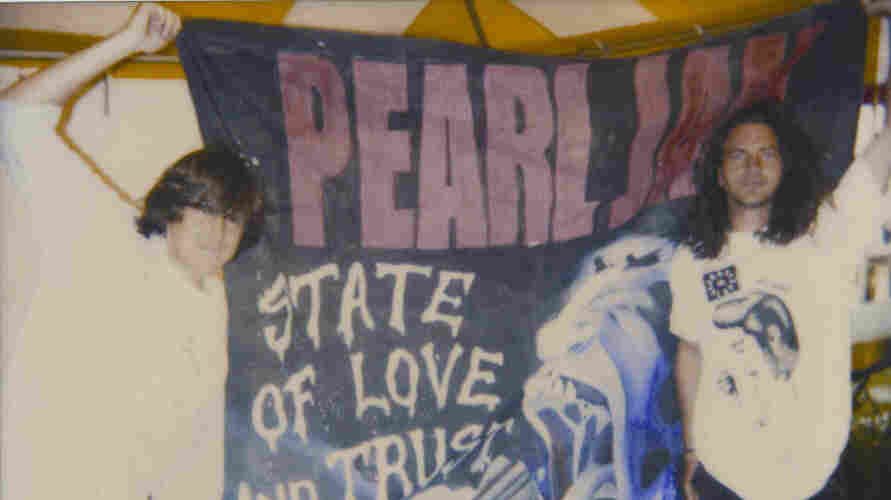 Every morning I open up my email and see them clustering there: the new bands on the block, grimly posing in their local alley, or throwing arms around each other's shoulders and grinning, looking tough and looking fresh. Here they come with a free download, a sweet quote from Aquarium Drunkard, an opening slot on a tour with somebody who did great at last year's Pitchfork festival. They're a teeming mass of dreams and feedback, the new bands, each one believing that it will claw out a solid space in the giant ball pit of pop.

Why be in a band in 2011? They're so unnecessary. Popwise narcissists now have desktop studios and open-source collaboration tools, flexible pseudonyms and the option of joining a cool boy-girl duo if they get a little lonely. Yet the bands keep coming. The available names at this point alone seem to signal an end: Cerebral Ballzy. Kidneythieves. Acu-Funk-Ture. A Great Big Pile of Leaves. Couldn't people have just agreed to have stopped this madness after Arcade Fire?

Yet there is a reason to believe in the band, or at least in one band that started with an utterly crappy prognosis 20 years ago — Pearl Jam. On Weekend Edition Saturday, Scott Simon will talk with director Cameron Crowe and his fellow executive producer (and longtime Pearl Jam manager) Kelly Curtis about PJ20, the new documentary that, along with a soundtrack packed with rarities and a lush coffee table book, fetes alternative rock's most best working argument for being in a band — not for hipster cred or intermittent chart success, but for the sheer bloody, ragged, glorious hell of it.

Pearl Jam had with a ridiculous name, a prehistory that included a major drug fatality, and a raggedy image that pegged its members as either homeless youth or hippie progeny dressed by their parents. For a frontman, the group chose a rather odd, definitely shy surfer dude from San Diego, despite being part of a Seattle music scene notoriously unfriendly to outsiders. At the height of indie rock's anti-corporate contrarianism, Pearl Jam debuted on a major label. What could possibly go right? 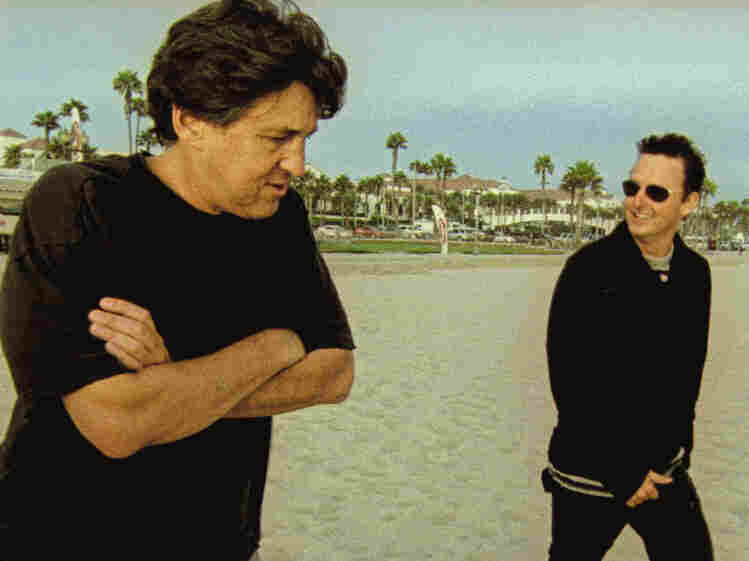 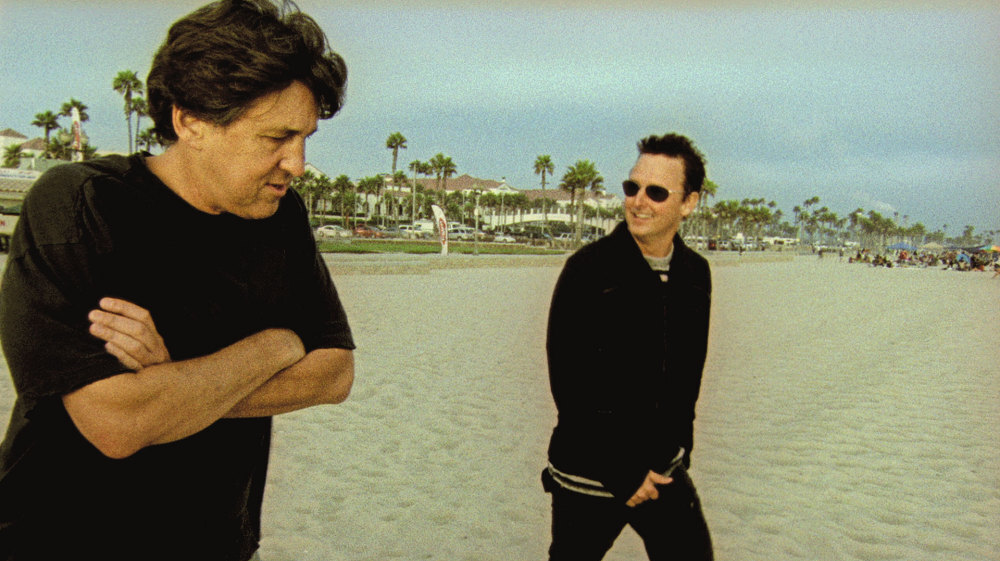 Twenty years after releasing that first album, Ten, Pearl Jam is a prime example of making things right — an enduring creative partnership and ethical business venture that demonstrates exactly why giving your life to a band could be a good idea. Its fans feel that way: they're among the most devoted in rock, keeping the group commercially viable long after its gritty guitar flow has moved away from pop's central spotlight. And as Crowe's new documentary Pearl Jam Twenty unostentatiously reveals, its members believe it too. A lyric Eddie Vedder wrote to celebrate this anniversary year makes the point: "So glad we made it to when it all got good."

Crowe is a true believer who started out as a teenage rock scribe and went on to craft a body of work that explores, from many angles, the way boys become men in a culture that rewards perpetual adolescence. His classic films — Say Anything, Jerry Maguire, Almost Famous — are rock and roll movies even when they're not specifically about music making. They're rock and roll movies in a lineage that runs from Rebel Without a Cause to Ruby in Paradise. As Say Anything's sweet hero Lloyd Dobler puts it: "I am looking for a 'dare to be great' situation." That's one way to describe the rock and roll quest.

A band dares to be great in a unique way. Most are made up of mistfits like Dobler or anxious alpha types like Tom Cruise's Jerry Maguire, whose ambitions intermingle with a certain inability to scale down to the size of the everyday workaday world. There's a tasty irony in the fact that the rock-band ideal of ongoing, intimate creative collaboration is usually enacted by outsiders who have to work extra hard serving something bigger (or different, at least) than any one genius can generate.

Band-based rock music is about pushing through each other's crap to get to the gold: dissonance in counterpoint with harmony. More than most bands, Pearl Jam has faced serious challenges to this smooth operation within the act of music-making and beyond it. Crowe's narrative focuses on its process of figuring out how to do better, which took it from being just one of many decent rock bands to being one of the greats.

This is the story Crowe couldn't tell in his rock-oriented narrative features Almost Famous and Singles (which included cameos from several PJ members), because those movies were about young musicians in hot scenes, and the daring greatness of Pearl Jam requires getting older and, honestly, less cool.

Every positive milestone PJ20 documents is matched by one that's daunting or downright horrific. Some made a big splash. Two deaths — the 1990 overdose of Andy Wood, leader of founding members Stone Gossard and Jeff Ament's early band Mother Love Bone, and later the suicide of Vedder's rival, friend and inspiration Kurt Cobain — had a notorious impact. So did the tragedy at the Roskilde festival in 2000, where nine fans were killed in a stampede as Pearl Jam performed. Crowe has great footage and gets insightful quotes from the band members about those events.

Just as important, though, are the more subtle relationship shifts PJ20 follows: how Gossard, the band's original main songwriter, dealt with Vedder's move to the fore; how Vedder himself created a persona that allowed him to maintain some sense of privacy; and the many decisions Pearl Jam and its steadfast support team (especially manager Curtis, though he does not appear onscreen) made to make fame and fortune an element in a sustainable career instead of just the comet burst of a short run.

Any Pearl Jam fan would have been happy with the film's copious archival footage alone — Crowe incorporates incredible early live material, intimate backstage scenes (including some fantastic stuff with Cobain), and interviews with each member that bring their very different personalities to the fore. The decision to limit the talking-head material to Pearl Jam members and their occasional collaborator Chris Cornell — no family members, no pundits — helps Crowe focus the film as a character study and plays into his dominant theme: a hard and loving look at five men becoming mature.

As long as there are basements and instruments to play there, the desire to create music in real time and space will likely prevent the utter extinction of the band. These little tribes, as Kurt Cobain called them, might not always make rock as we know it. Already they've made room for more women, more people of color, and a better mix of straight and openly queer members than were evident among the shaggy, beautiful boys of Pearl Jam's early era. These changes are making things better, as those awful band names, silly press shots, and downloadable bids for attention just keep coming. Why form a band, and why keep it going? Because, as Lloyd Dobler might have said, a dare is better when it's shared.

Coming Together from Victoria Taylor on Vimeo
LANGUAGE ADVISORY: This video contains language that some viewers may find offensive.