Accessibility links
15 Songs By This Year's Rock And Roll Hall Of Fame Nominees : The Record Hear our favorite song by each of the 15 performers up for induction in 2012. 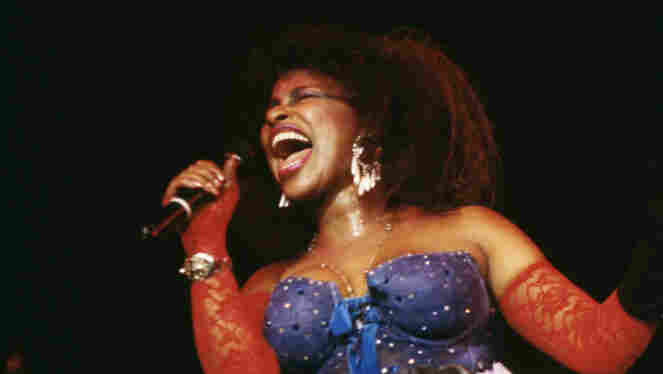 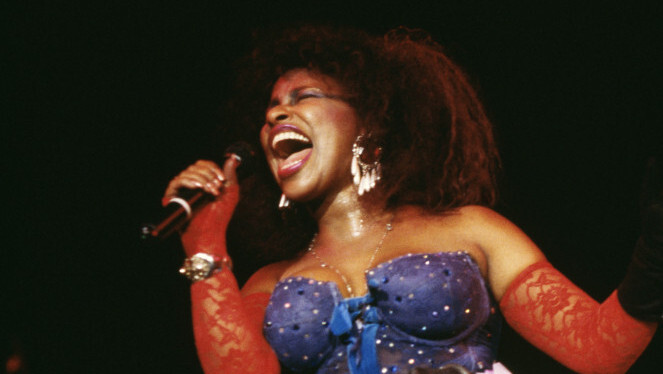 Rock and Roll Hall of Fame nominee Chaka Khan onstage in London in 1985.

The Rock and Roll Hall of Fame Foundation announced its latest round of nominees on Tuesday, and it's as varied and substantial a group as anyone (except for Rush fans, again, so sorry, I feel your pain) could want.

Next to the National Academy of Recording Arts and Sciences, whose Grammy awards honor the larger spectrum of pop, the RRHOF is the closest thing to an official organ that wild world of post-war American vernacular music can claim. Established in 1986 to help legitimize the very idea of a rock and roll canon, recently the RRHOF has begun to participate in that term's redefinition.

Pop superstars like ABBA and Madonna and hip-hop pioneers like Run D.M.C. have found a spot in the Hall, alongside champs from once-scorned corners of the genre, like Metallica and Blondie. Arguments still greet every year's selections, but often now they're more sophisticated, challenging once-sacred presumptions about authenticity and creative ownership.

2012's class, which will be honed down to five "performer" inductees from today's list of 15, should please even the most irascible canon-bashers. More women than usual have a chance, as do players in often-forgotten arenas like funk and post-punk. It's a high-quality bunch, too, strongly connected to both the Top 40 and the critical establishment. Several choices would fill gaps in the proper telling of classic rock's history (and herstory!). Others continue the work of making that story bigger and better.

Below, you'll find the current crowd of nominees for the Rock and Roll Hall of Fame, in my personal order of preference. This year's list abounds with gap fillers, edge walkers and those who've been left behind too long. I wish they could all get in. As the year's most notorious nominee, W. Axl Rose, once yowled, "Get in the ring."

Led the inimitable weird-sister team of Ann and Nancy Wilson, Heart is one of rock's great connector bands. Born in the early-1970s moment when classic rock was splintering into the subgenres of prog, arena rock and heavy metal, the group borrowed elements of each faction to come up with a unique and powerful sound. Beloved for Nancy's guitar wizardry and Ann's killer wail — Robert Plant himself has grudgingly admitted she can rival him — Heart is also notable for pioneering an androgynous style that's the femme counterpart to Bowie's fop: lace and velvet complementing — not concealing — sex and steel.

It's amazing to realize that Chaka Khan was still a teenager when she joined the interracial, Chicago-born, L.A-launched outfit formerly called the American Breed. Her voice, not only huge but deeply in touch with both the spirit and the hot core of sensuality, was full grown from the beginning. In songs like "Ain't Nobody," "Sweet Thing," and their signature "Tell Me Somethin' Good" – written and produced by Stevie Wonder to be one of the deepest, most profoundly blissful songs about lust ever recorded — Chaka and the fearlessly funky risk-takers musically supporting her touched every nerve ending with their sound.

Eric B. and Rakim

Figuring out how to bring hip-hop into the fold has been the most important move the RRHOF has made in the past decade. The art form born on New York's streets laid the foundation for 21st-century popular music, the rock and roll of the digital age. This duo — a rapper still acknowledged by many as the standard-bearer for dazzling wordplay and vocal power and a DJ who taught the world turntablism and James Brown superlove — represents artistic seriousness in the genre. Inclusion would cast aside any doubts that the music some conservatives once considered the enemy of rock is now its historic equal.

This is the year's biggest toss-up: will the last great monster spawn of L.A.'s decaying rock dynasty gain admission in this first year of its eligibility, since after all no one has taken on the mantle of classic rock so powerfully in the past three decades? Or is there too much ill will borne toward the band now, after the decades we've all spent watching Axl Rose pursue his manic auteur dreams? Slash, a solid classic rocker if there ever was one, will certainly earn some votes. So will that much-abused, perfectly ragged band of scarf-wearing troublemakers. Me, I'm an Axl diehard: despite the misogyny, brutal prejudice and all-around ugliness he often embodies, he remains one of rock's most fascinating huge personalities, a visionary who shows us what we might not always want to see. The G'n'R legacy goes far beyond Appetite For Destruction -- though that album alone spits and claws its way in.

Before hip-hop, there was disco: the music world that gave birth to the DJ and showed an open-minded generation of dancers and lovers how virtually any sound could come together in a well-executed mix. Donna Summer is disco's most enduring goddess, a soulful belter whose experience doing theater primed her to bring to life a character that embodied the music's melded mood of liberation and loss, youthful abandon and world-weariness. Far from just a tool of Pygmalion producer Giorgio Moroder, Summer animated his electronic fantasies and made them palpable. She also had the chutzpah to match Barbra Streisand in a duet.

Look past the eyeliner — The Cure, led by the deceptively eccentric sonic scientist Robert Smith, played a key role in taking rock past the fruitful crisis of punk and into a new era. The group's hits swathed dark emotions within a translucent veil of whimsy; its melancholia was harder for mainstream rock fans to embrace than was U2's optimistic romanticism. So many just filed The Cure under "odd." While others were busy making fun of his looks, Smith was busy exploring sound: the various incarnations of The Cure were there at the birth of electro-pop, shoegaze, goth and psychedelic electronica. Smith and his mates also innovated the art of the music video in clips like this one, which justified all the Tim Burton comparisons.

What is a cult artist, if not a hidden river from which dozens of tributaries flow? That's the truth of Laura Nyro's legacy. Nyro wrote some of the best hard-to-classify hits of the late '60s, including The 5th Dimension's "Stoned Soul Picnic" and the Blood, Sweat & Tears anthem "And When I Die"; her own albums reached a smaller, devoted audience of connoisseurs and other artists. Song cycles like 1969's New York Tendaberry created the mold for the cinematic singer-songwriter, later famously filled by the likes of Elton John, Tori Amos, Alicia Keys and (in her quieter moments) Lady Gaga.

Jelly Roll Morton identified the "Spanish tinge" in American popular music more than a century ago, and still it's not getting the respect it deserves. Latin influences in rock seem particularly prone to getting buried. War, from the melting pot of Long Beach, Calif., brought it right out into the light of day. First gaining fame for its collaborations with Hall of Famer Eric Burdon, then crafting the unique blend we hear in subtly politicized party songs like "The Cisco Kid" and "Why Can't We Be Friends?" War's induction would also represent another gain for hip-hop — as one of the genre's most often sampled groups, it built the floor upon which many 21st century stars have danced.

New York's perennially youthful Jewish Elvises deserve to be in the Rock Hall, not only for their groundbreaking recordings and always satisfying live shows, but because they pretty much invented the style that possesses 50% of American hipsterdom today. Progressive politics, check (remember the Tibetan Freedom concerts?). Snarky humor, check. Deep knowledge of music history, check. Have you noticed a guy walking around in a porkpie hat, carrying a skateboard, lately? That's because of the Beastie Boys. Also, all three of them have really cool female companions.

Some will wonder why Jett's original group, The Runaways, isn't nominated. The matter's worth discussing. But the bandana-wearing, mullet-flaunting Jett was always the guitar-flogging heart of Kim Fowley's craftily assembled all-girl band, and what she did after breaking free and becoming a solo artist had more musical impact than anything The Runaways accomplished. Emerging at the dawn of the '80s with glammed up ravers like "Bad Reputation," Jett didn't merely lock down the look and sound that the baddest female rockers have emulated ever since. She also took punk into the mainstream for a new generation.

This warhorse soul outfit has been overlooked before, perhaps because no one can believe the group is not already inducted. In fact, it's a shocker to realize this is the Spinners' first nomination. Everybody has a Spinners memory, whether it's the lovers who swooned to "Could It Be I'm Falling in Love," the lonely hearts who wept to "I'll Be Around," or the kids who giggled at "Rubberband Man." Founded in 1961, the Spinners found real success in the '70s, working with the great producer Thom Bell. The RRHOF is still coming to terms with that complicated decade; maybe that's why it has taken so long for these naturals to be acknowledged.

When you're talking alternative musical canons, Donovan's a natural subject. The British folk whisperer has often been pegged as a kinder, gentler (and to certain snobs, inferior) version of Bob Dylan — the scene in the documentary Don't Look Back where Dylan derails a challenge from his new rival is one of the great rock and roll kiss-offs. In this century, however, younger poptimists and freaky folk fans have reclaimed the Scottish balladeer as a purveyor of both hooky hits like "Mellow Yellow" and strange psychedelia like the Bowie-ish "Season of the Witch." Last year his nomination fell through, perhaps because another psychedelic traveler — Dr. John — took his place. He might prove to be the right kind of Sunshine Superman now.

Revisionism is a crucial part of canon-making. That's why the past five years have been the most exciting in the RRHOF's history since its first five. Yet deserving folk representing the Hall's original perspective have fallen through the cracks, and it's a shame when their nominations get lost in the excitement over more novel possibilities. Freddie King is one such figure. The guitarist, who died young in 1976 after a life of hard touring, inspired Eric Clapton and Jerry Garcia and left a treasure trove of his own recordings. It might take a pendulum swing to get King inducted, but it will happen someday.

I can't cope with the Red Hot Chili Peppers being nominated — and for the second time! It's not because I don't admire them, I do. The band's sound is hugely influential and still surprisingly fresh (compare it to Nirvana's sound, which remains thrilling in the original but inspired so many poor imitators). Flea is one of rock's great instrumentalists and an all around mensch who's collaborated with Thom Yorke and Josh Groban, just to name a few, and funded L.A.'s Silver Lake Conservatory for years. Bood Sugar Sex Magick ranks among the best album titles of all time. Still ... they can't be that old. I can't be that old. Can we?

Here we are, down to the wire. Who remains? A classic British rock band. Or two. Keyboardist Ian McLagan has expressed his dissatisfaction with the Faces being nominated as "a combo" — as both the original group and its later incarnation, which featured Hall of Famers Rod Stewart and Ronnie Lane. The Faces are cool, having given the world loopy classics like "Itchycoo Park" and the psychedelic suite Ogden's Nut Gone Flake. McLagan in particular has stayed relevant, making some great music with Billy Bragg and his own Bump Band in recent years. Will history be altered if the Faces make it into the RRHOF? Not so much. But that doesn't mean their set at the induction ceremony wouldn't be a party.