Accessibility links
The Morehouse College Glee Club Is 100 : The Record The renowned singing group of the all male, historically black college is celebrating its centennial. 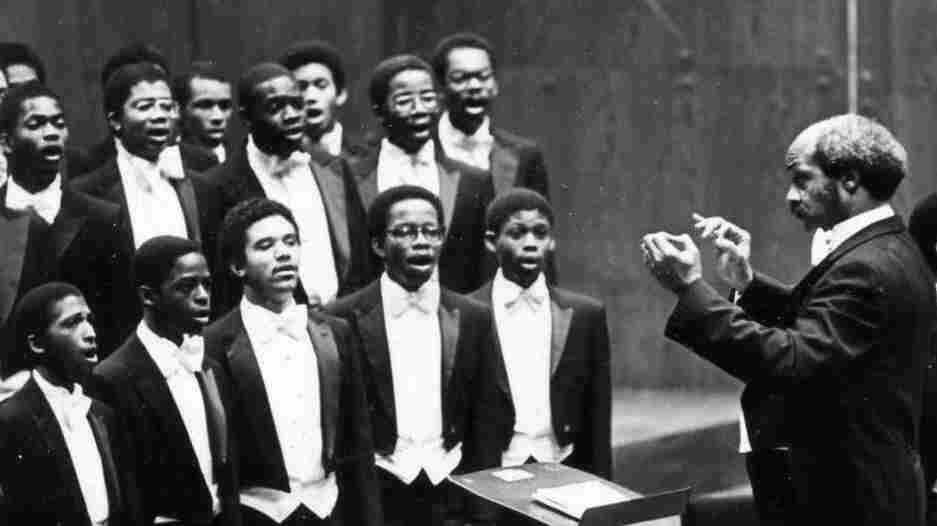 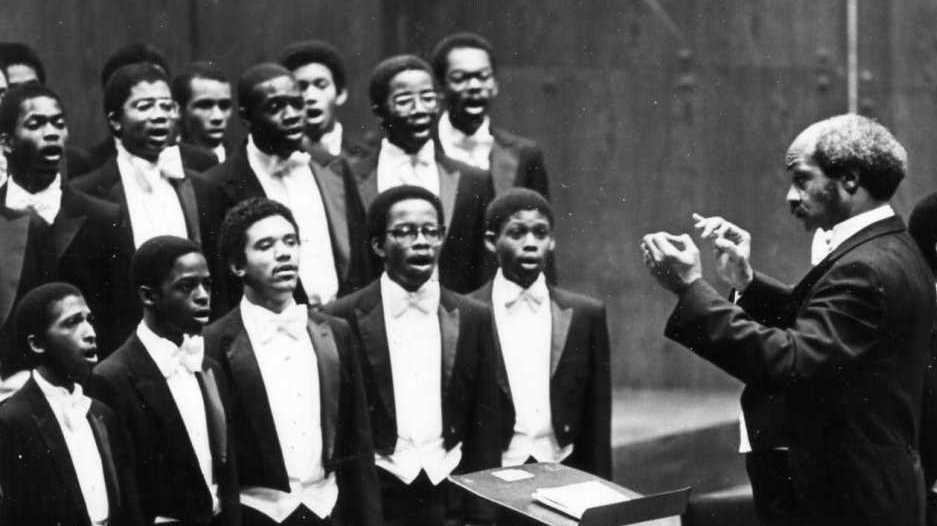 The Morehouse College Glee Club in performance in 1981. Wendall Whalum, at right, was the second of only three directors of the club in its 100 years of existence.

On Sunday night, 60 tuxedoed young African-American men will briskly walk down the aisles, onto the stage of New York's Lincoln Center and launch into a Norwegian folk song. It's the Morehouse College Glee Club, which is celebrating its 100th anniversary Sunday.

From their arresting entrance, the club's concerts are marked by energy and dynamic subtleties. Their programs include classical choral music, barbershop quartet, spirituals, arrangements and — always — "Betelehemu," the Nigerian carol they perform at every full concert. When they do that song, some of the singers come off stage shouting into the audience while African drums play at center stage, in front of the chorus. It's their show stopper. The Morehouse Glee Club has been singing "Betelehemu" for more than 50 years.

Morehouse College was founded in Atlanta in 1867, and it remains the only all-male historically black college in the nation. Almost from the beginning, the Glee Club members have been the school's official performing ambassadors. The club has earned an international reputation through its annual tours and has traveled through Europe, Africa and the Caribbean.

The Glee Club is known for its focused stage presence, musical precision, wide-ranging repertoire, distinguished alumni and its recording of "I'm Building Me A Home," which Morehouse alumn Spike Lee recorded for the opening credits of his 1988 film School Daze.

Thousands of students have come through the Glee Club. I sang bass when I was a student there. Martin Luther King, Jr. was a tenor in the club, and in 1968 the group sang for him at his funeral. Singing at a brother's memorial is a longstanding Glee Club tradition -– we call it closing ranks. The traditions are taken very seriously.

David Morrow, the Glee Club's current director, is only the third in the group's 100-year history. He took over when his teacher Wendall Whalum -– who had been there for 34 years –- passed away in 1987. Dr. Morrow says that the club's strength has been its continuity.

"The things that I feel now being in the centennial instead of planning for it," Dr. Morrow says, "are just a huge amount of happiness that I have some part in getting us to be 100 years old and feel successful and upholding the standards that were passed to me by my predecessors. I had some wonderful shoulders to stand on and I'm hoping that who ever succeeds me will find my shoulder as strong."

Some of the standards that Dr. Morrow inherited, and in turn teaches, go beyond music. In Glee Club, we were taught that being on time meant being a few minutes early and that our singing was a gift to the community. We were constantly reminded that some people in our audience may never have seen a group of black men in tuxedos, and so it was our duty to represent the highest standards of the college and of ourselves.

Former Secretary of Health Louis Sullivan also sang bass when he was at Morehouse. He attended this year's reunion in February.

"The Glee Club is really like a fifth fraternity on campus," Sullivan says. "You get to know people a lot. We traveled together, we've planned together — so this 100th anniversary is really truly a remarkable event."

The anniversary year officially began at the reunion, and when I speak with past and current members, adjectives like "commitment," "brotherhood" and "excellence" still resonate. James Grissom, a 2011 graduate and the group's vice president, says Glee Club has made him ready for the next phase of his life.

"Over the past four years, the music of the Glee Club, the ministry of the Glee Club, the discipline, have all been characteristics that have built me as an individual and as a man," he says. "This moment culminates all of that and as a reminder as a senior that as I move into the next phase of my life to take this discipline and this excellence that I've learned into every aspect of my life."