Accessibility links
Will There Be Another Dylan? : The Record An artist has yet to grab center stage in the Occupy Wall Street protests. The political movement has gone viral without a leading musical voice. Instead, there is a field full of freestyles. 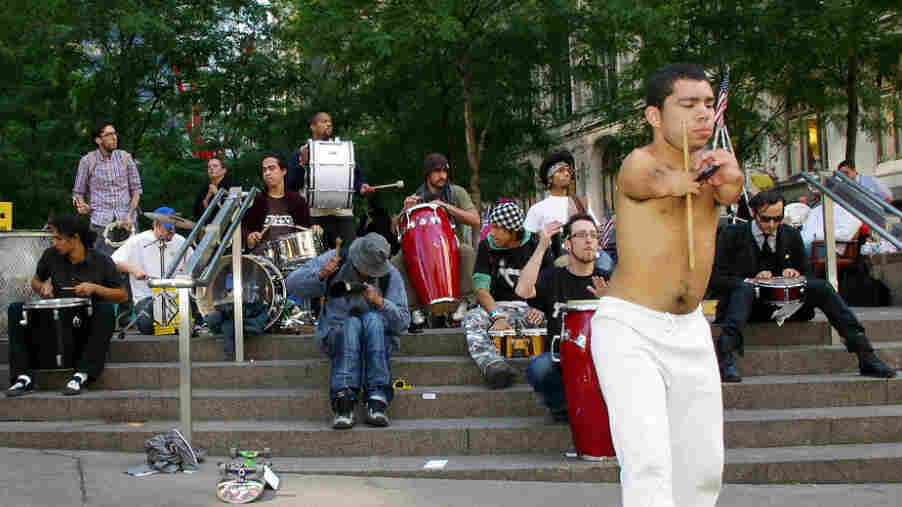 Zuccotti Park on Oct. 6. The people making music during the Occupy Wall Street protests are not celebrities. 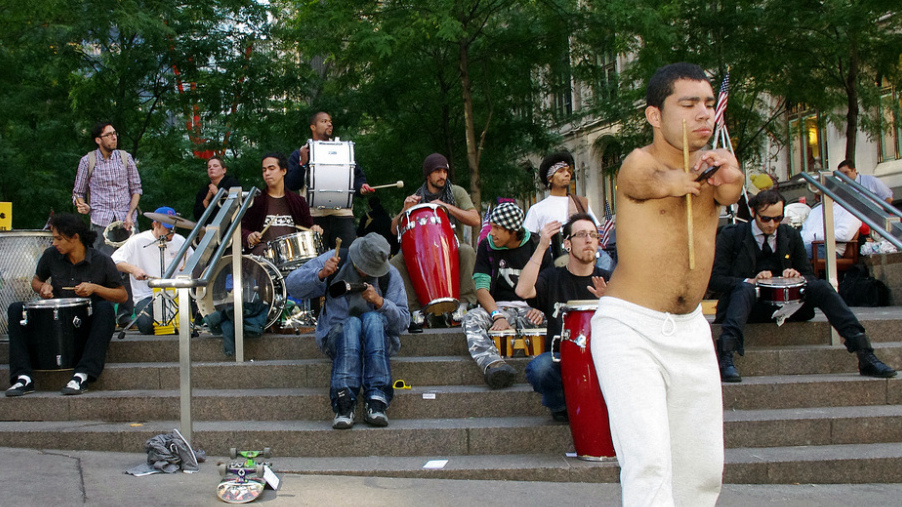 Zuccotti Park on Oct. 6. The people making music during the Occupy Wall Street protests are not celebrities.

The other day I posed a question on my Twitter feed: What is the music of Occupy Wall Street? As a veteran of many street protests and an amateur historian of popular music rabble rousing, I've been waiting for someone to grab center stage in Zuccoti Square and emerge as a new Bob Dylan or Joan Baez. This political movement gone viral, which some identify as the leftist version of what the Tea Party wrought a couple of years earlier, has no leading musical voice. Who will emerge to take up the challenge, to write the 21st-century version of the great hymn of the labor and civil rights movements, "We Shall Overcome"?

The footage of Dylan and Baez strumming and singing for thousands at the 1963 March on Washington remains the starting point for many discussion of political music, even after nearly 50 years (I've gone there before). Sharing space with the miraculous gospel voice of Mahalia Jackson and, eventually, a throng of 300,000 people singing together, Dylan especially found a way to step into the role of generational leader at that moment. His music served a cause, and the cause made him more than he'd been before.

A similar opportunity could arise for an artist at Occupy Wall Street — or so it would seem to anyone used to the 20th century model of grassroots activism. Yet when I put out my query on Twitter, the responses I received were either old-school suggestions (The Clash, Public Enemy), wry jokes (Ray Charles' "Busted," jams by right-winger Ted Nugent) or hopeful artists' bids for attention. A few folks made playlists. One advised me to simply listen to Democracy Now.

One response stuck with me, though: Sara Marcus wrote, "The human mic?"

The human microphone is the term that's evolved for the system of call-and-repeat that the Wall Street group's loose leadership has come up with to deal with a police ban on any amplification.

When someone needs to announce something, he or she does so and then whomever is within earshot mirrors the words. In a strange way, it harkens back to the most fundamental practice within the gospel churches that fed the civil rights movement: call and response, the method through which one preacher's voice would enthrall a congregation.

But really, it's more like a Twitter exchange: a phrase goes out, people latch onto it and eventually it coheres into a narrative. The music scene in Zuccoti Park, and at similar sites all over the country, is evolving in that way.

Not that there haven't been moments when it seemed like a star or two would descend. The biggest pop-culture rumor to hit the area was that Radiohead would play a free concert last Tuesday, after its weekend Hammerstein Ballroom shows. That didn't happen. Instead, artists' visitations have been modest, unannounced and highly participatory. Cult favorites, not major luminaries, have made the scene.

Most famously, Jeff Mangum of the rock band Neutral Milk Hotel strolled down to Lower Manhattan Wednesday to play a short acoustic set. This was newsworthy, in part, because after making one of the most beloved albums of the late indie rock era — In an Aeroplane Over the Sea, in 1998 — Mangum basically retired, uninterested in the pursuit of any kind of celebrity. His Occupy Wall Street set was not a bid for new-Dylan status but a simple gesture of connection. Of course, it was captured on a few iPhones and became a sensation on the Internet.

Other artists have made brief appearances. The New York rapper Immortal Technique spoke a few words and performed "A Toast To the Dead". Spearhead leader Michael Franti, a fixture within progressive circles, played the same night Mangum did, sharing songs that have served him well in several other political arenas. Talib Kweli debuted a new jam and offered one by his duo with Mos Def, Black Star. Jazz trombonist Steve Swell gathered some friends and headed down to make a ruckus.

Mostly, though, the music of Occupy Wall Street has been generated not by known performers or even people who necessarily call themselves "artists." It's emerged from the cloud that's spread on the ground. The same 21st-century style organizers who've been holding twice-daily meetings to come to consensus, privileging process over a set of clear objectives, are engaging in the kind of culture-making that dominates the Tumblr-loving, home recording-making, music industry-scorning future thinkers taking pop into its next phase.

Drum circles may seem quaintly hippie-ish (Jon Stewart, for one, compared the scene downtown to the jammy festival Bonnaroo) and characters like Gio Safari aren't far off from Wavy Gravy. But Web 2.0 has always been partly about curating the best from the past. What it's not about is anything identifiably top-down. And that's why the voice of this generation turns out to be a chorus.

At the Occupy protests from New York to San Francisco, people do their own thing and find themselves coming together. Chants break out — some obscene, some in Spanish, some lifted from the surf of pop history. The one that struck me arose right before the mass arrests that brought the New York gathering fully into the national spotlight. On the Brooklyn Bridge, those on the move busted out some Beastie Boys: "No sleep 'til Brooklyn!"

It's new for many observers, on the left and the right, to grasp how a movement might unfold without a clear agenda, set of leaders — or even one anthem. Many people find the non-hierarchical structure of Occupy Wall Street frustrating. Among the presumptions it overturns is the one that leads us to expect and emblematic musical performance: that new Dylan or Baez or Mahalia Jackson lifting every voice toward song.

Instead, we get a field full of freestyles. It's still possible that one will best the rest. But is that even what we should be listening for?