Accessibility links
Electronic Music Festivals In The Media's Cross Hairs : The Record The massive popularity of Electric Daisy and Electric Zoo has come with mainstream media scrutiny that's reminiscent of the coverage of Woodstock. 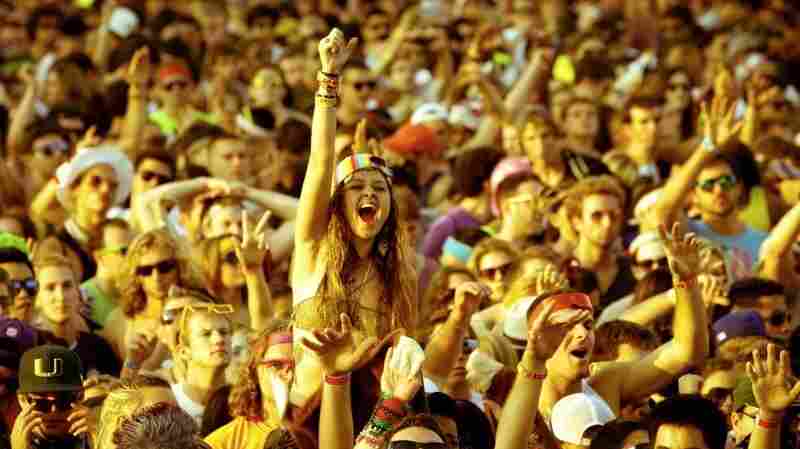 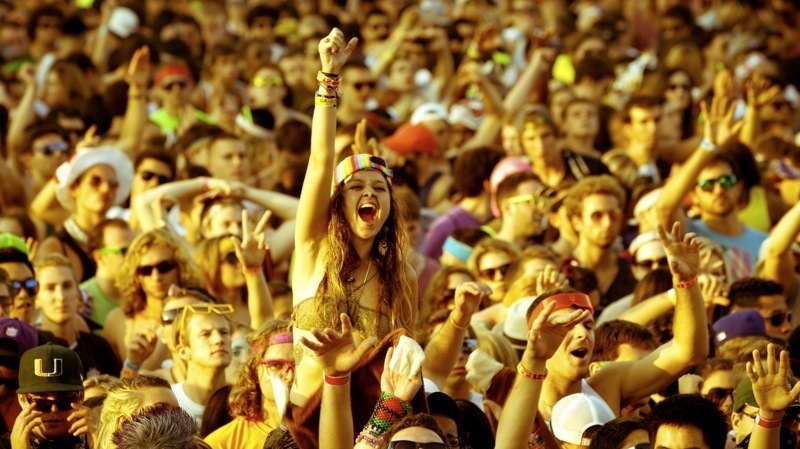 On Labor Day weekend, a bustling sea of music fans in their late teens and early 20s were stuffed onto a grassy, open field in New York. One of them stood out, dancing in a sweat-drenched black T-shirt that read, "Sex, drugs and dubstep."

Obviously it wasn't Woodstock, but in between the neon sunglasses and hot pants, I saw remnants of hippie culture in tie-dye and plumes of weed smoke. Electric Zoo is a three-day electronic music festival held annually on Randall's Island in New York; this year 80,000 people walked through the gates. Earlier this summer, on the other side of the country, The Electric Daisy Carnival drew 230,000 people. Ryan Raddon, also known as DJ Kaskade, was one of the DJs that played there.

The thing is, electronic music festivals haven't been ignored. They've received quite a bit of press coverage, but much of the attention has focused on drug use and danger. This year's Electric Daisy was held in Vegas, after it got kicked out of the LA Coliseum, following the death of a 15-year-old last year. Her parents are now suing the Coliseum commission and the promoter of the festival, Insomniac Events. In June the death of a 19-year-old made headlines when an Insomniac event in Dallas was shut down early for violating fire codes.

A month later, a documentary about the Electric Daisy Festival caused a furor of its own, when riot police were ordered in to control larger-than-expected crowds, after Raddon tweeted that he would DJ a free party outside of the event.

"Nobody wanted that outcome," Raddon says. "That's not what was supposed to happen. But definitely the media — from what actually happened, to what I saw in my hotel room, there was a huge difference."

On cable news networks, the word "riot" scrolled under reports of the scene outside the movie premiere. Three people were arrested, and there were no major injuries reported.

After the premiere, Dan Turner of the Los Angeles Times published an editorial titled "Electric Daisy Events Not Worth It For Los Angeles," writing, "If any city is equipped to handle an unruly crowd of young people high on drugs, it's Las Vegas."

The CEO of Insomniac, Pasquale Rotella, countered with an editorial of his own headlined "Don't Trample The Electric Daisy," in which he took issue with the term "rave." Betty Kang, a publicist for the Electric Zoo festival in New York, says that word carries a history of negative connotations that don't apply to events like hers.

"Dance music was not allowed in the clubs, and there were these underground parties quote unquote raves," she says, talking about the mid-1990s, when drug-use was the main focus of reports on raves from mainstream outlets like 20/20. "There was no organization. Like [it was] some kids in the woods or in an abandoned building throwing a party with no safety no security. So I think those situations created this negativity around it because they were illegal."

"I worked so much overtime trying to talk about how the rave scene wasn't all about drugs," Ariel Meadow Stallings told The Record in July. She published and edited the rave zine Lotus in Seattle during the late '90s. "It was very noble of me, and I still do believe it wasn't all about drugs. But it is a drug culture. Even if you're not on drugs, the culture of the party is determined by the fact that there are people there who are."

"I think drug fairs are nothing uncommon. They may be shocking to editors who think it's just awful and can get some headline writer to do something clever," says Barnard Collier, who reported on Woodstock for the New York Times in 1969. "Music has had drugs attached to it since caveman times, I suspect, so to me the idea that music and drugs shouldn't be intimately connected is absurd."

When Collier went to Woodstock more than 40 years ago, he says that at first his editors at the Times didn't want to cover the event at all, and when he persuaded them, they wanted his story to fit a certain frame.

"That was that these were a bunch of drugged-out hippies who were causing great trouble and catastrophe [that] cost the county of Sullivan tons of money and should be closed down by the governor forthwith."

Collier says that's not what he saw. "It didn't look that way to me. I was ready to quit if I had to. I said, 'Look, I won't write it if you don't put it in like I said.' It eventually got up to the editor Scotty Reston [James Reston, then the executive editor of the paper] and Scotty said, 'Look, we have to write it as he sees it.'"

Nevertheless, the paper followed his report with an editorial titled "Nightmare in the Catskills" that opened with the line, "The dreams of marijuana and rock music that drew 300,000 fans and hippies to the Catskills had little more sanity than the impulses that drive the lemmings to march to their deaths in the sea."

Not all of the coverage of Woodstock in 1969 characterized the attendees as insane. The BBC coupled their descriptions of rampant drug use with accounts of hippies behaving well, lauding the cooperative spirit of the event. According to the New Yorker's music critic, Ellen Willis, there was a romanticized theme that ran through the coverage of Woodstock, which she believed was inaccurate. In a piece she published in the magazine in 1969 she wrote, "The cooperative spirit did not stem from solidarity in an emergency — the "We all forgot our differences and helped each other" phenomenon that attends power blackouts and hurricanes — so much as a general refusal to adopt any sort of emergency psychology."

In many ways, romanticism and demonization in news stories come from the same place, says Todd Gitlin, a professor of Journalism and Sociology at Columbia University. According to him, the press has a penchant for the sensational.

"Media are drawn to vivid and conflict-filled situations: the colorful, the spectacular, the lurid, the bloody, the ghoulish, the hilarious, the freakish, the bang bang," he says. "This has been true for a long time. I was at Altamont, and it was certainly true there."

He adds that the media build news-frames that suit their audiences, which in the case of print news tend to be older.

"There's a gravitating towards the, 'Oh my god, look at what's happening to the kids' story," he says. "It's a frame that didn't just begin. It's a staple, because the press is surveying the society for menaces."

Betty Kang admits that there is drug use at Electric Zoo, but notes that the event has never had a drug-related death; she says that's because of the amount of hard work that goes into the festival.

A lot of people at electronic music festivals aren't there for drugs — they're there for the music, says Ryan Raddon. He insists that much of the way dance music is covered has to do with the fact that it's only beginning to cross over into the mainstream.

"Electronic music, mainly because it's new, does get tagged as something bad, as rock and hip-hop did," he says. "Hip-hop still gets grief."

If past history is any indication, mainstream media coverage of non-mainstream cultural events is as likely to stoke the flames as it is to put out any fires.