Accessibility links
Move The Crowd: A Report From The Americana Music Awards : The Record This year's ceremony displayed the curiosity and range — not the conservatism — of Americana.

Move The Crowd: A Report From The Americana Music Awards

Move The Crowd: A Report From The Americana Music Awards 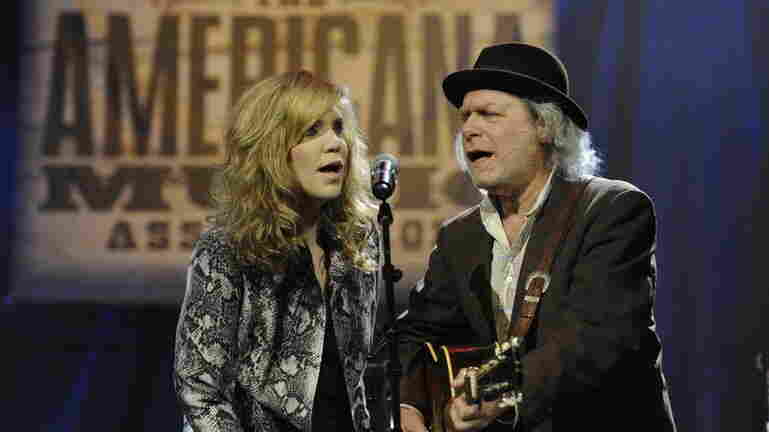 Alison Krauss and Buddy Miller performing a tribute to the O Brother, Where Art Thou? soundtrack at the start of the Americana Music Awards show on Oct. 13th. 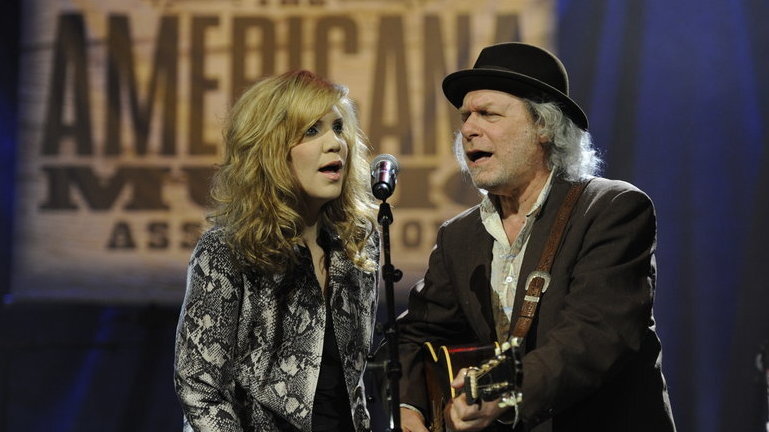 Alison Krauss and Buddy Miller performing a tribute to the O Brother, Where Art Thou? soundtrack at the start of the Americana Music Awards show on Oct. 13th.

The highlight of this year's Americana Music Awards ceremony — and, some would say, of the entire Nashville conference and festival devoted to celebrating and debating the groundwork of American music — featured England's most famous golden rock god performing a song by an underground goth-shoegaze band whose own version was released on the venerable indie rock-ish label Sub Pop. Contradictions, anyone? Let's call them growing pains.

Growing pleasures, really: Robert Plant and the Band of Joy turned Low's already great "Monkey" into a hovering blue energy field that sucked up all the dust in country music's shrine, the Ryman Auditorium. The group had just won the Album of the Year award for its self-titled 2010 release, which continues the work Plant began with Alison Krauss, of imagining a more spacious, dare-I-say feminine version of the blues-rock he took to monumental heights with Led Zeppelin (in his acceptance speech, Plant thanked his Band of Joy collaborator Patty Griffin for "really turning the record around"). By bringing such a challenging sound into the Ryman, Plant and his collaborators reminded any authenticity fetishists in the room that musical definitions are like musculature: they hold you up, but they're only functional when stretched.

Krauss herself helped open the show with a song representing Americana's comfortable baseline. With Emmylou Harris singing harmony and Artist of the Year winner Buddy Miller on guitar, Krauss sang a simple version of "I'll Fly Away," the hymn she'd recorded with Gillian Welch for the O Brother Where Art Thou? soundtrack, which helped make Americana a phenomenon when it won 2001's Grammy for Album of the Year.

"I'll Fly Away" evoked old-time religion and a picturesque vision of small town life. "Monkey" traded in mystical dread and the Southern gothic. The fact that Miller, a key member of the Band of Joy, was featured in both performances nicely illustrates the exciting conflicts currently taking Americana somewhere new: the need to balance an ideal of authenticity with public music-making's inherent show-biz spark; the fact that in telling any history, we emphasize certain elements while leaving out others; the artist's desire to honor one's tribe but also run away from it into a space of individual expression.

The term "Americana" can stand for an attitude that narrows our view of these contradictions. At one panel I attended during the three days I spent at the conference and festival, someone spoke up for "American music with a history — not hip-hop, not disco." (If you nod yes to those words, please check out this book, and this one, and this one.) Americana — which refers to a radio format and a strongly supportive artist-and-fan community as well as a musical style — has provided a way for many musicians who operate outside the commercial mainstream to make a living and find a cultural niche. But at times, it's also turned staid, its defenders closing ranks against innovations too closely identified with contemporary music or with the marketplace.

The most interesting music I heard in Nashville — or heard about from others' enthusiastic reports, given the hectic realities of any music fest — resists those conservative tendencies by connecting to the aspects of American roots music that are playful and boundary-pushing. Made by artists who want to move a crowd, not earn its hush reverence, this kind of Americana opens more doors than it closes.

The neo-honky tonk of Hayes Carll and Elizabeth Cook taps into the rabble-rousing outlaw country tradtion to address contemporary issues like the current conflicts in the Middle East, or mostly hidden subjects, like drug addiction's affect on families. At the other end of the country spectrum, camera-ready ingénue Nikki Lane follows the lead of self-created characters like Dolly Parton or Bobbie Gentry in creating a sound and image that's as much about Hollywood as it is about some rural "holler." And The Civil Wars, one of my favorite new duos and a huge success story this year, have found a blend that's as eclectic as it is pristine, touching on sources like Tori Amos and Leonard Cohen, as well as country's close-harmony tradition.

When the younger Americana artists who stood out at this festival glance backward, they don't seem to be seeking some Eden — they're engaging with traditions that are as likely to be urban and openly theatrical as they might be rural and homespun.

Pokey LaFarge, who really needs to guest on Boardwalk Empire, and Justin Townes Earle, whose "Harlem River Blues" won him a Song of the Year award, connect with the glamor of the nightclub and with the sophistication of figures like Louis Jordan or Fats Domino. Memphis singer-songwriter and bass player Amy LaVere explores the fatalism of the femme fatale role in her jazz-tinged music, while young bands like Lake Street Dive and The Black Lillies go for the dance rhythms embedded in jump blues and roadhouse party music.

I think this curiosity and wide range, if not iconoclasm, has always been part of Americana. Performers who've been around a good while displayed it too: it was there in Keb Mo's easy rolling blues, now veering toward classic soul, and in the righteous thump of the North Mississippi All Stars, in the countrypolitan class of Connie Smith and Mary Stuart and the loose fun of the week's all-star tribute to Alabama's soul mecca, Muscle Shoals. The music that was played consistently defeated the holier-than-thou attitude that's sometimes accrued to this scene. It still has new places to go — I'd love to see more soul artists (how about JC Brooks and the Uptown Sound?), more encounters with mainstream country and some new kind of blues revival, whatever that may be. But in general, Americana is alive because its practitioners are giving it a kick. I'll come back for more of that.