Accessibility links
8 Completely Embarrassing Music Videos : The Record Rob Tannenbaum and Craig Marks, co-authors of I Want My MTV: The Uncensored Story of the Music Video Revolution, pick the worst of the worst. As it happens half of them were made in 1983. 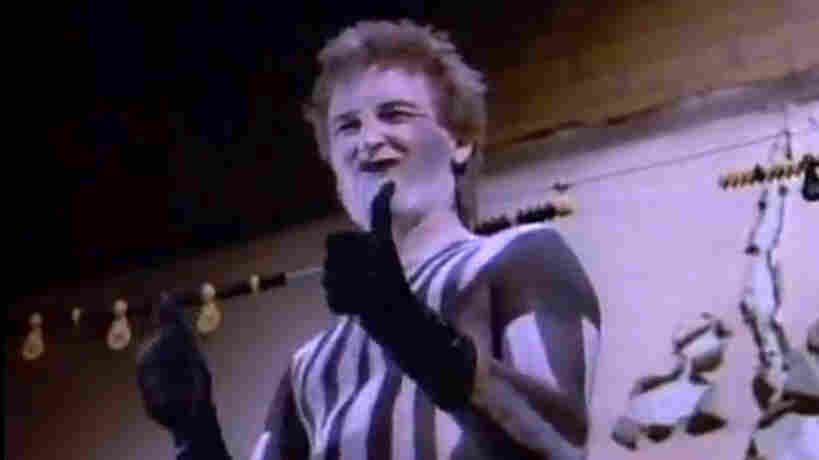 A screen grab from Scandal's video for "The Warrior." That's right, it's referee uniform body paint and he's keeping score on a string abacus.

I love thick, juicy oral histories, because they offer a wider perspective than any author could manage alone. A big cultural story like that of the world's most influential music television network — told in the new book I Want My MTV: The Uncensored Story of the Music Video Revolution — requires many voices. There's the artistic angle coming from musicians and video directors; the business story, a major one within the music industry's evolution; the personal side, of drug trips and red-carpet stumbles, overcooked egos and half-baked creative impulses. This thick tome has them all.

It's also maybe the first book best read at the computer, with your browser open to YouTube. Any given page triggers memories of a classically great or awful video. Rob Tannenbaum and Craig Marks, the book's co-authors, have been busy creating playlists to promote their new release. They're both buddies of mine, so I asked them to do a special one for The Record. What they came up with is deliciously hideous: the top videos artists regret making, accompanied by excerpts from the book.

Anyone who grew up watching MTV lovingly recalls some favorite videos — as well as some real stinkers. Did the bands in them know they were starring in something awful? Often, the answer was yes.

"I'm not a big fan of any video, especially my own," says Daryl Hall. "In a word, I hated the Hall & Oates videos." Once MTV became successful, he explains, "Videos began to attract wannabe Cecil B. Demilles, directors who had almost unlimited budgets and did whatever they felt like. 'Adult Education' is a perfect example. We brought in a director I didn't know [Tim Pope], who was newly hot. He didn't have a clue what to do with the song. The plot? I couldn't tell you."

Steve Barron directed a lot of superb videos, including Michael Jackson's "Billie Jean" and a-Ha's "Take On Me," but he admits that "Hot Girls In Love," the clip he shot for Loverboy, was "absolutely dreadful." And the band agree with his low opinion. "Loverboy made horrible videos," confesses singer Mike Reno. "They were really obvious, schmaltzy videos that were probably great for our careers."

Patty Smyth got a new hairdo before Scandal's video for "The Warrior," and she suspects the hairdresser "must have hated me, because she made me look as bad as she possibly could." Add some body-painting and Smyth firing finger guns whenever she sings the lyrics "bang bang," and you have a truly bad video. "I had no idea it would look like an off-Broadway version of Cats. When I saw the video, I was so upset and embarrassed. I begged the record company not to release it," Smyth recalls.

"I have to say, I hated MTV," Toto guitarist Steve Lukather sighs. "Hated" is also a word he uses when recalling Toto's "Hydra" video. "We spent millions on sh---y videos, and they'd never get shown. It's like, 'Why don't I just take $50,000 into the backyard and light it on fire?'"

"Stand Back" was the first and last time Stevie Nicks wrote a video. She picked a Civil War scenario, using Gone With the Wind as her inspiration, but the house that was rented as a set (located in Beverly Hills, not rural Georgia) caught on fire, and Nicks was filmed riding a horse, which promptly galloped into a grove of trees with the singer on board. "I almost got killed," Nicks says. The video "was so bad, it was almost good." Still, she decided to shelve it and pay for a completely new video. Her manager, Nicks recalls, called her "an idiot."

Run-DMC was the first rap group that was regularly played on MTV, which made them the envy of the hip-hop world. But they had mixed feelings about "Rock Box," their video breakthrough. DMC says, "We weren't into it — it was just something we were told to do. And the director [Steve Kahn] had the idea to have some little boy chasing after Run-DMC, to show we had appeal to the younger generation. A little white boy, too."

Journey singer Steve Perry was "very anti-video," recalls Jonathan Cain, the band's keyboard player. When Journey went to New Orleans to shoot the "Separate Ways" video, the director told the guitarist to play air guitar, Cain to play air keyboards and so on. "I'm at a loss to explain that video. Good Lord, I will never live it down," says Cain. Years later, Beavis and Butt-head mocked "Separate Ways," which he says "was an outrage to me."

Nancy Wilson of Heart laughingly likens a music video to "a mini-movie with people who can't act." While the band was shooting "Never," her sister Ann says she "burst into tears and had to leave the room," because the video was so crassly sexual. Nancy: "There I am, with my rack. I got relegated to the bombshell department in videos. It's a blessing and a curse, at the same time."