Accessibility links
Spotify Is Good For The Music Industry, Its CEO Says : The Record The 28-year-old founder of the subscription music service stands by his company's business model. 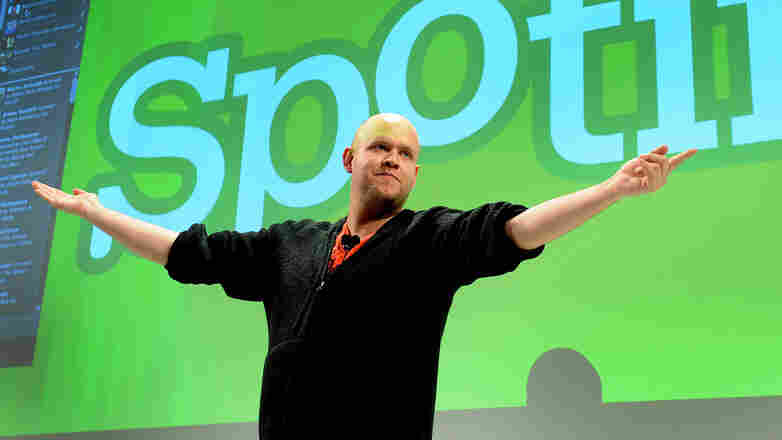 American music lovers took note when the digital music service Spotify arrived in the States this summer. It's already Europe's largest paid subscription music service. Spotify's essential offering is a robust catalog of music — some 15 million songs – available for on-demand streaming. Users can call up songs for free and download them to a mobile music player for a monthly fee.

How Spotify Works: Pay The Majors, Use P2P Technology

Some industry watchers see Spotify's offering as the end of the music download business. But Daniel Ek — the company's Swedish-born, 28-year-old founder and CEO — feels differently.

"I don't want to be characterized as an iTunes killer," Ek tells Weekend Edition host Audie Cornish. "What we really are trying to do is move people away from piracy into a legal model that contributes revenue back to the music industry. It's really that simple, and I think the key is by creating more convenient products."

Though the service may be convenient, some artists would rather their fans download their music or purchase physical copies. A few high-profile acts such as Coldplay and Adele have kept their latest releases off Spotify and other streaming music subscription services, since artists make tenths of a cent every time one of their songs is streamed.

Still, Ek stands by his company's business model. "Spotify is only two years [old], almost three. In that short period of time, we have become the second largest revenue generator for the labels in Europe, and we've paid out more than $150 million back to the music industry."

Ek says that Spotify's premium subscribers, by paying a $9.99 monthly fee, spend more on music each year than people who only download songs from iTunes and other services. "All of a sudden, by being a subscriber on Spotify," he says, "you're actually contributing more than three times back to the music industry."