Accessibility links
The Year In Pop And Profanity : The Record Pop has hardly just developed this pretty potty mouth. But never have so many artists spilled profanity so blissfully, or embraced salaciousness with such ease.

The Year In Pop And Profanity

The Year In Pop And Profanity 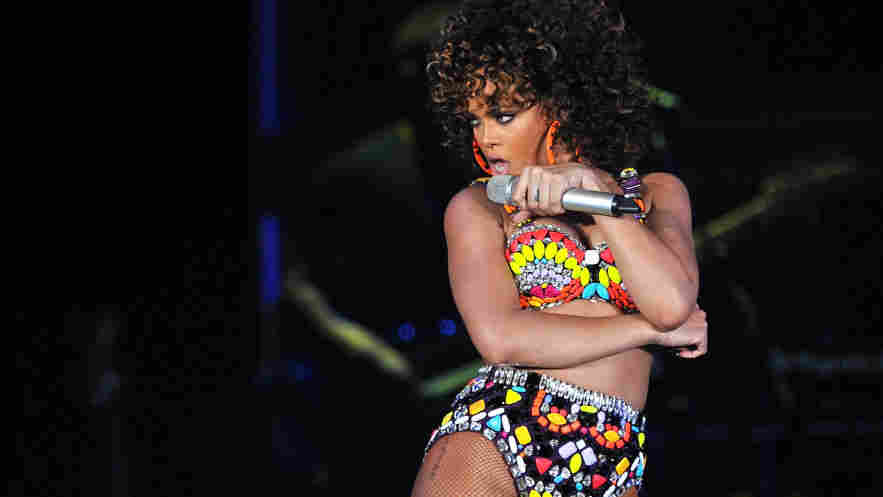 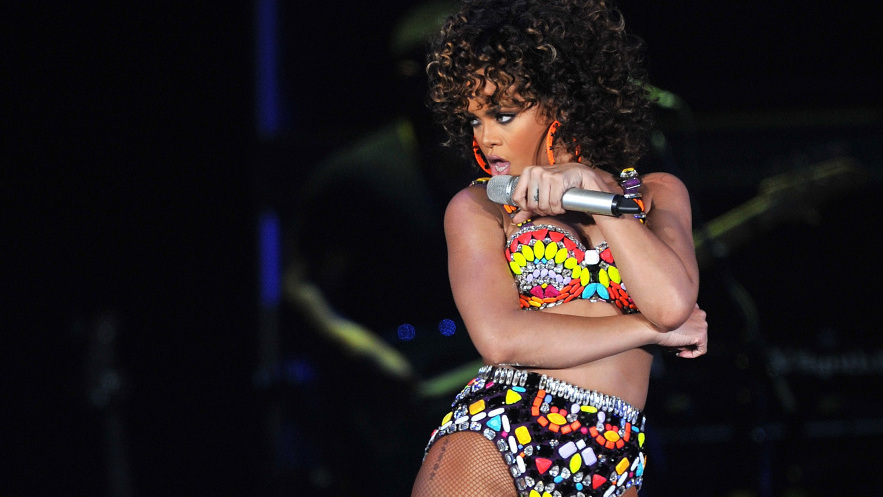 Recently, Rihanna appeared on the British version of singing competition The X-Factor, performing her monster hit "We Found Love" while wearing a sweet plaid jumper over a prim white shirt. Her hair was in dainty curls. At first it seemed that the young star known for raunchy club cuts and guest turns on tracks by hardcore rappers had gone all Doris Day for the family show. But a glance at her boyish black shoes revealed a phrase inscribed on the side of one: "F--- OFF."

The profane footwear choice was a punkish gesture from the Good Girl Gone Bad, complementing her rise as the queen of risqué hitmaking. It wasn't overtly sexual, yet it beckoned toward an undeniable reality: 21st-century pop music is very dirty.

The Music Stories We Missed This Year

2011 saw so much boundary-breaking in pop that the lines seem forever pulled down. There were several underground rap hits unabashedly celebrating oral pleasures; Top 10 songs about sex addiction, the cowgirl position and extraterrestrial booty; country music's embrace of the stripper pole and a holiday performance from Lady Gaga in which she did a bump and grind while performing "White Christmas." Rihanna's sneaky inclusion of a curse word in a supposedly sacrosanct prime time television appearance was less a rebellious move than a spot-on fashion statement: G-ratings are so last century.

Pop has hardly just developed this pretty potty mouth. But never have so many artists spilled profanity so blissfully, or embraced salaciousness with such ease. There's a sort of carefree, cheerful quality about such naughtiness now. Red-hot content has become strangely warm and fuzzy. Sometimes it seems daring, at other times it feels like a form of denial.

It's dangerous to make big pronouncements about American sexuality. The only safe thing to say about something so personal is that somebody, somewhere is doing it differently than you do. Over time, however, dominant attitudes emerge, shift and evolve, and popular culture serves as a guide to absorbing and participating in that process.

In America, popular music has long been a major conduit — the major one, I'd argue — for day-to-day conversation about this sticky subject. Whether deliberate (your hot date has agreed to a nightcap at your place: put on that Robin Thicke playlist) or accidental ("'Mom, why is Katy Perry singing about melting a popsicle?") music facilitates communication about a subject that's ever present, but often feels too difficult to address.

Elijah Wald, whose book on the raw roots of hip-hop, The Dozens, will be published this spring, is one of several scholars who have traced the history of American music's big blue streak. "One of the charms of vernacular culture is that it keeps evolving and adapting, and one of the charms of dirty vernacular culture is that each new crop of teenagers treasures it as a trove of secret, forbidden lore," wrote Wald in a recent issue of the Oxford American magazine. Those bold early 20th century blues queens are often quoted singing lyrics that would make Lil Wayne's dreadlocks stand on end; yet every era and scene offers similar examples, from the "bird in the bush" ballads of the Victorian era to R. Kelly's props-enhanced, X-rated performances a century later.

The basic subject matter stays the same — there's a certain biological imperative, after all. What changes is the artist's, and in reflection, the listener's, relationship to it. Angela Davis has argued that at the turn of the last century, ribald blues was one means for African-Americans to express a new sense of freedom. The 1950s saw a preoccupation with teenage kicks that fed the itch of a newly mobile and economically empowered generation. In the '70s, the feminist, gay liberation and black pride movements fed a utopian sensuality reflected in disco. And so on.

The current shift in American attitudes about sex dates back a little more than a decade — roughly the span of the pop stardom of Britney Spears, its first major icon. Technological and social changes have pushed our expressions of the erotic into new shapes. The most provocative music this year, from the Blowfly-style underground sounds of Stooshe and Danny Brown to the NC-17 teases of major pop stars like Katy Perry and Spears herself — as well as the violent anti-sexual rants of Tyler, the Creator and his Odd Future crew — aims to grapple with the new scenarios arising from these developments.

The technological side is easy to grasp. The World Wide Web has become a new frontier for frank material that parallels Hollywood in its bawdy pre-code days. Unregulated by the Federal Communications Commission, which reins in outliers in more established forms of media — never forget the nipple slip! — the Web made a space for creative titillation and airings of the collective id. Increasingly affordable D.I.Y. tools (software, webcams) also made it possible to share homemade auteur efforts that might have otherwise remained behind closed doors.

"I think that's the primary front where boundaries have been pushed, precisely because the FCC doesn't regulate those media," wrote Kembrew McLeod, associate professor of communications at the University of Iowa and author of several books on copyright and freedom of expression, in an email. "For the most part, it just regulates terrestrial radio and television broadcasts, and we all know how much the ratings for those venues have fallen. So, in short, I think the graphic language boundary pushing has much to do with the fact that kids now listen to music largely through unfiltered sources like Youtube, which the FCC doesn't touch."

Britney Spears was born in 1981, at the very moment when second-wave feminists were confronting issues of sexuality. The so-called "sex wars" represented a split between those who thought male sexual power as manifested in pornography and sex work was the root of female oppression, and others advocating for free and open explorations of sex, including legalizing sex work and creating feminist porn. This highly acrimonious debate was one of a few key factors (along with much-needed debates on race and queer politics) splintering the feminist movement. The inability to find common ground muddied the ground where feminist sexuality, as a concept, was being cultivated (though plenty of pioneering women, from Susie Bright to Arielle Loren, kept doing the work.

Add in one other element that's united the Web-based technological revolution with the stalled sexual one: the relatively new frontier of cloud-based eroticism. The new tools spurring on musical innovation are also being used to remake sex — both literally, as virtual encounters become the norm, and in the realm of representation. We need a way to negotiate these changes, not just in terms of specifics ("Computer Love" has been a thing, after all, since the cyberfunky '80s), but in relation to the way these changes affect individual self-conception — the way we feel about their bodies and negotiate our desires.

This isn't easy stuff to process. So what you get in 2011 is Rihanna trying to move beyond the fallout from her very public encounter with domestic abuse by taking on the role of risk-taking erotic outlaw, and still being being faulted as superficial. Or Katy Perry, a former Christian artist and devoted wife, giddily describing sex with a space alien. Or Lady Gaga negotiating her mixed feelings about the need to be a sex symbol by repeatedly declaring herself celibate. Or on the guys' side, Drake or Lil' Wayne trying to figure out how seduction works when you and your partner both feel like sex workers. Or Tyler and his Odd Future gang, stepping over the line into rape fantasies but still seeming strongly impotent, as his scenarios twist into surrealist nonsense.