Accessibility links
Are 140-Character Reviews The Future Of Music Criticism? : The Record This week, alternative rock's bible, SPIN magazine, announced that it would eliminate the standard short album review from the magazine. In 2012 the magazine's writers will assess 1,500 albums, each via a single post on Twitter.

Are 140-Character Reviews The Future Of Music Criticism?

Are 140-Character Reviews The Future Of Music Criticism? 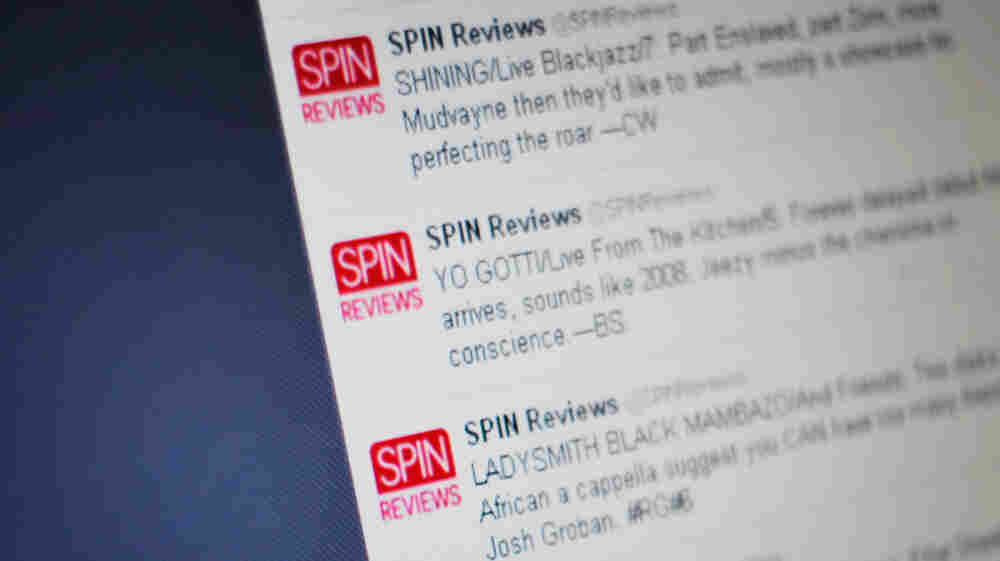 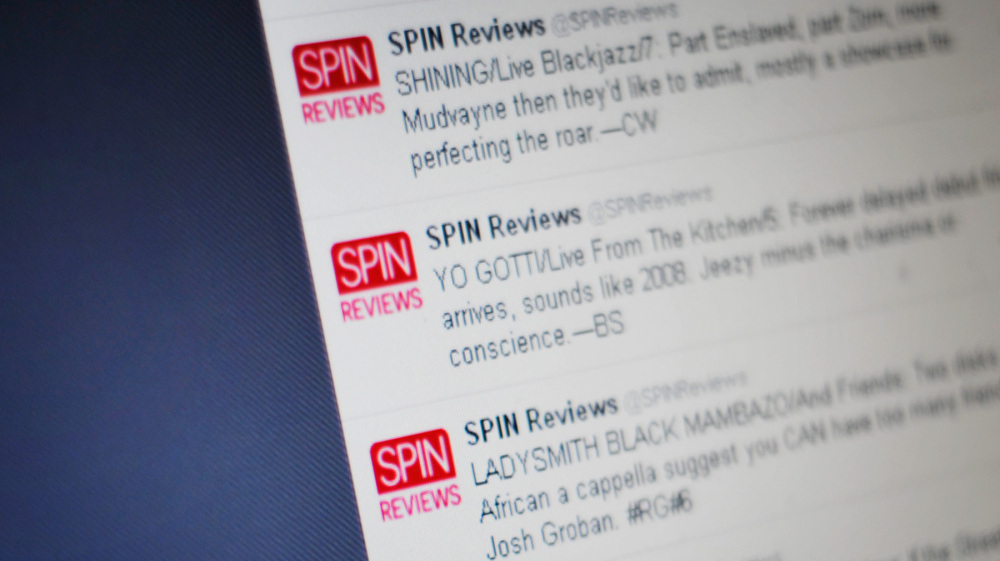 This week, alternative rock's bible, SPIN magazine, announced that it would eliminate the standard short album review from the magazine (and web site) in order to "reinvent the album review." 21 staffers and freelancers will assess 1,500 albums over the course of the year via single 140-character posts on Twitter. In an essay, the magazine's staff said the project would aim "to be an exhaustively definitive listener's guide and argument-starter for virtually every album or EP or mixtape that matters in 2012."

If SPIN's project sounds familiar, it might be because the writer heading the effort has pretty much already done it: In 2009, Christopher Weingarten reviewed 1,000 albums on his Twitter account, @1000TimesYes, managing to squeeze the artist's name, the album title, a number score and the sequential number of the review, plus a few words about the album itself, into those 140 characters. (On David Bazan's Curse Your Branches: "Losing your religion makes you prickly, punky, droll;" on the Avett Brothers' I And Love And You: "Things like 'love songs' and 'Southern rock' just how textbooks describe them.")

Now SPIN's senior editor, Weingarten has imported his format, and some philosophy, to the magazine.

The most entertaining thing about Weingarten's @1000TimesYes project was that he — along with most of his followers, I'd wager — is the kind of person deeply involved in the world of music criticism. The mini-reviews were dense, full of inside-jokes and references, but you knew he had longer, deeper, subtler thoughts about each album; part of the fun was imagining how those thoughts had been whittled away in order to deliver a 140-character quip, poem or takedown.

Because it is group-sourced rather than written by one heroic guy, what actually vanishes in SPIN's new arrangement is the capsule review, that abbreviated form still meant to represent a full critical take on an album. Which has caused some predictable hand-wringing around the music-critic community about taking column inches and cash away from the writers who have picked up paychecks by writing the short blurbs.

What many have missed is the fact that along with the hundreds of mini-reviews on Twitter, SPIN also plans to continue publish long-form criticism (a new review, 668 words on Let's Go Eat the Factory by Guided by Voices, is up now). In a post on his own twitter feed, Weingarten argued that the elimination of capsule reviews had a practical purpose:

"The goal of @SPINReviews is not to reduce every CD to a bon mot; its to let us spend time/energy/budget on making the long reviews better."

We wondered if the elimination of the capsule review wouldn't be toasted by some music critics. In an email, Carl Wilson, an editor and music critic for The Globe And Mail in Toronto who wrote capsule reviews for Blender magazine, expressed some ambivalence about the form:

"Capsule reviews have their value. Not every album is worth a 1,000-word essay, by any sane measure. A 150-word review is tricky, a little bit haiku-like, but it's room enough to put the artist in quick context, describe generally what the album is like and its high- or low-lights, and find some witty or poetic way of summing up its essence and suggesting whether it's worth the reader pursuing further. I found them both maddening and amusingly challenging to write. I've seen brilliant ones (Robert Christgau's Consumer Guide being the obvious alpha-omega of the form). The shorter they are, the snarkier and less constructive they tend to be."

The reader of the blurb can still expect some degree of context, however limited. If Tweets replace blurbs, though, will people start believing there's nothing more to say? We wanted to test whether 140 characters could substitute for, say, 200 words. So our critic, Ann Powers, performed what we're dubbing a "magic capsule" test: she picked two of the nine tweets @SPINReviews has published so far and let them marinate in the watery environment of her brain to see what they'd look like as conventional short reviews.

The rules: Ann (who has written for SPIN and whose husband, Eric Weisbard, was an editor for the magazine in the 1990s,) chose albums she hadn't heard, and didn't look to the Internet for any information about the artist. As such, most of the information contained in these blurbs is pure inference, down to fictional names and song titles. Any similarity to the actual musicians and recordings is purely coincidental. Any confusion caused by said similarity is explicitly intended.

Ann's Magic Capsule: Distinguishing between a good drug trip and bad one is a deeply personal matter. It's much more doable, however, to judge the depiction of a high — the "rave" episode of Law & Order SVU, for example, doesn't measure up to the Hawaii Five-0 show that had Stone dosed on LSD. Black Flute, the debut longplayer from a small tribe of barely twentysomethings huddled on a side street in Bed-Stuy, strives to replicate one long, memorable psychedelic journey. But it gets stuck just before peaking, and the ensuing headache takes the listener way down.

The band, led by vocalist-programmer Scott Trimane and drummer Claude Dufresne, two refugees from the same Wesleyan dorm that spawned Das Racist, doesn't tap into that group's sly political satire. It's all about mood here, grown from a bed of plastic-fastic designer blurps and bleeps and rigidly repetitive rhythms. Shorter tracks like "Infinite Morning Glow" and "Love Your Wendy Smile" approach the mix of sunlit insight and jagged paranoia that made Animal Collective's mid-period work so influential; there's a chance Keepaway could grow into a decent weird pop band. But when Trimane lets his Jamaican fascinations run rampant, slipping into a fake patois that his fellow Cardinal alum Himanshu Suri would find more than mildly problematic, Keepaway sinks into a quagmire no amount of stimulants will help it escape.

Ann's Magic Capsule: It's a nice idea that we might be able to make up the soundtracks to our favorite movies in our heads — but it's really not true. For most of us, film-going remains a relatively passive experience, and the music that blasts our ears in Dolby 3-D stereo at the multiplex or through our computer's headphones is strictly what the filmmaker and his producers chose to set the mood. Veteran Dutch trance producer Johnny Jewel (born Andreas Fuerzig) has been innovating in this realm for some time, however, with his Web-distributed "mixtracks" inspired by, and playable along with, recent arthouse hits.