Accessibility links
Johnny Otis, Rhythm And Blues Pioneer, Has Died : The Record The bandleader, radio and TV host and composer who wrote "Willie And The Hand Jive" also discovered many of R&B's greatest voices. Otis died Tuesday in his Los Angeles home. 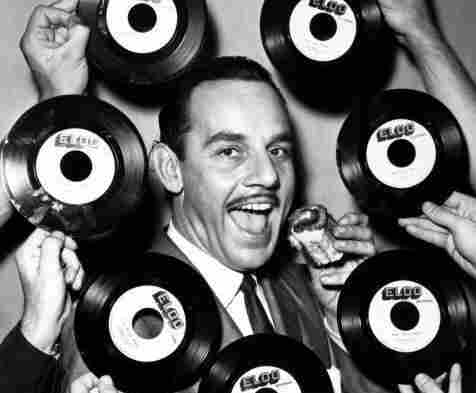 Band leader Johnny Otis poses for a portrait in surrounded by "The Jelly Roll" records in 1947.

Johnny Otis was many things over his career, including a bandleader, producer, radio and TV host and composer. Additionally, Otis launched the careers of many of R&B's finest singers. Otis died on Tuesday at his home near Los Angeles. He was 90 years old.

Otis could write hits, and sing them as well. He had several, including "Willie And The Hand Jive" in 1958. But Otis spent as much or more time developing the talents of others. He once said he could "see something before anyone else." He saw that "something" in a long list of great singers he discovered or nurtured, including Jackie Wilson, Etta James, Big Mama Thornton and Esther Phillips.

Born Ioannis Alexandres Veloites, the son of Greek immigrants, Johnny grew up during the Depression in a working class neighborhood in Berkeley, Calif. When he started playing music, he changed his last name to Otis. He played mostly in black clubs, as he explained to Terry Gross of WHYY's Fresh Air in 1989.

"I could not veer away because that's where I wanted to be," Otis said. "Those were my friends. That's what I loved. It wasn't the music that brought me to the black community. It was the way of life. I felt I was black."

George Lipsitz, author of Midnight at the Barrelhouse: The Johnny Otis Story, says the Ku Klux Klan once burned a cross in Otis' yard. But that didn't stop Otis from later writing a book about the Watts riots, arguing they were a logical reaction to police brutality and slumlords in the ghetto. Lipsitz thinks that's why Johnny Otis isn't better known today.

"It's as if he took a match and lit the rest of his career on fire," Lipsitz says, "because once you took a public stance like that, you weren't going to be the curator of rock 'n' roll like Dick Clark or Casey Kasem. You were somebody who was going to be outside commercial culture in the society."