Accessibility links
Still Chasing The Dream: 'American Idol' Eleven Years In : The Record The star-making singing contest still shows us what pop means to a huge number of Americans. 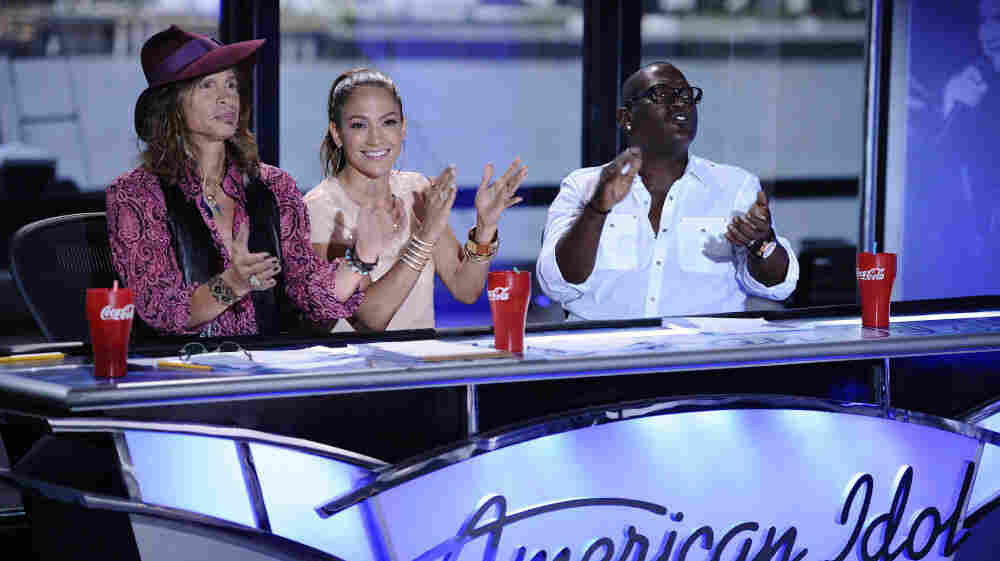 It's All Good: American Idol judges (from left) Steven Tyler, Jennifer Lopez and Randy Jackson have led the show into an era that favors love over scorn. Michael Becker/FOX hide caption 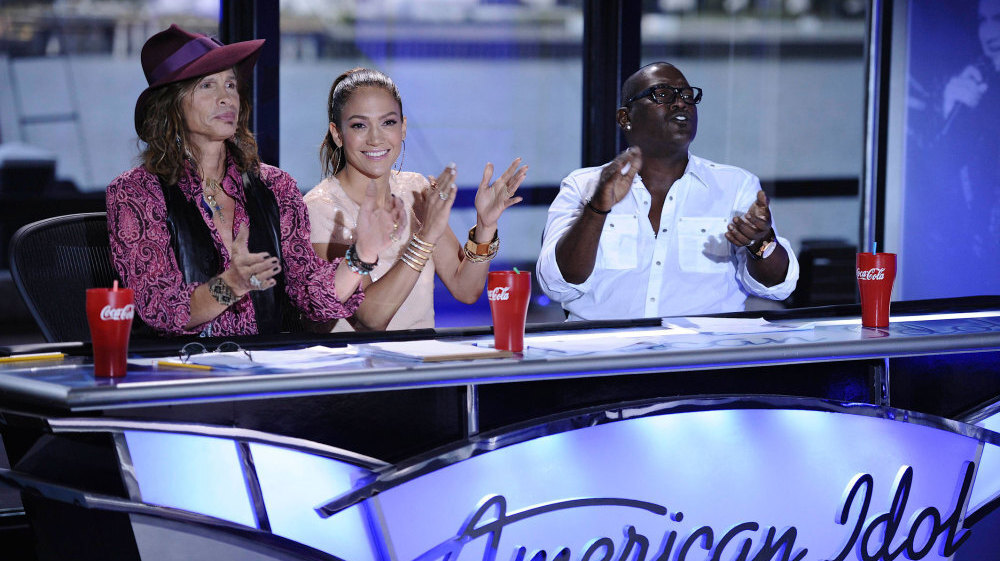 It's All Good: American Idol judges (from left) Steven Tyler, Jennifer Lopez and Randy Jackson have led the show into an era that favors love over scorn.

In the natural order of things, thoughts of spring tickle our minds when budding wildflowers peep through softening earth. Or maybe a groundhog is involved. There may be snow on the ground in parts of the country, but for me, the warming trend begins when my flatscreen shows Randy Jackson strutting across some regional sports arena lobby, decorative pendant swinging in the breeze. I'm a creature of television habit, and American Idol is my seasonal indulgence.

I've found more in Idol than simple relaxation. I began writing regularly about the show five years ago, and it was a big part of my previous gig as pop critic at the Los Angeles Times. In that city, where starmaking is a central concern, the newspaper deployed a whole team to cover the pivotal singing competition. As I applied my analytical skills to season after season, I realized that Idol, while offering silly diversion on one level, also provides a way to talk about the entertainment industry, musical trends, and how individual singers develop their vocal personalities, as well as the larger cultural issues that popular culture always reflects and helps us process.

I don't turn to Idol to tell me what's relevant or new in pop. Instead, I follow it to better understand how many people dream about music. The strivers who audition for the show embody many different routes to pop success. As their ranks narrow and the battle heats up, the judges (and behind them, the show's producers) offer conventional music biz guidance on how to hone those approaches. And the voters, strategic as many may be, lend insight into what pop music means to a wide swath of Americans.

This year I'm tapering off Idol a bit — instead of tracking the show as it happens, I'll gather some thoughts every Friday about whatever Idol matter, musical or otherwise, engaged me the most that week. We'll expand the scope eventually, to include musings on The Voice, that other contest nipping at its heels. (My quick take on that show? The judges are more interesting than the contestants.)

As for this week's premiere episodes, which took us to sultry Savannah and surprisingly eccentric Pittsburgh: there's never much to say about the auditions. We may have already witnessed the winner's emergence (keep that acoustic guitar tuned, Phillip Phillips), but these first impressions fade fast as the year's real stories start coming together during Hollywood Week.

So far, so familiar: Steven Tyler's played the drooling Dada, leering at the ladies as he drops non sequiturs and grins toothily. Jennifer Lopez deploys her nail polish-hard showbiz smarts quietly from behind her girlish persona. Randy's still figuring out how to triangulate between these two dynamic personalities. Ryan Seacrest is still bopping around like the lost Chipmunk.

One small shift makes watching these content-light audition shows more bearable: producer Nigel Lythgoe and his team have significantly toned down the cruelty shown toward the most deluded, talentless Idol dreamers. So far, there's been no horrific racial caricaturing, as in 2008's "bush baby" incident; nor has anyone's ten-tissue breakdown been featured for laughs. Tyler's lechery isn't what I'd call feminist, but it's replaced former head judge Simon Cowell's chill in an interesting way — love, not scorn, is the default on Idol now.

As for the early contestants, my favorite, "joy hopper" Ashlee Altise, is probably too quirky to make it past Hollywood Week; likewise for Heejun Han, who has to be a conceptual artitst/prankster in Idol drag. A sinking feeling of "here we bro again" overcame me when the judges slobbered all over young jam-bander Phillips, and the similarly coltish Colton Dixon suggested this season may another teenybopper battle. (If we must have a boy battle, I'm rooting for Scott Dangerfield, a contestant rumored to be returning after bowing out early in Season 10; he aptly represents how Idol is making forays into the indie-rock sensibility.) But you never know. After all, Adam Lambert took us all by surprise not long ago; so did Crystal Bowersox and, briefly if fabulously, Jacob Lusk.

Each year, Idol offers its prepackaged frontrunners, its poignant also-rans and its exciting left-fielders. Some people think it's totally rigged. Others believe the best will surpass its hurdles and triumph. Me, I'm in it for the little thrills every week offers — the moments when a hopeful pushes past her own perceived limits, or a song choice makes me hear an old chestnut in a new way. And for the conversations I have with fellow Idol devotees, or even haters, which often turn out to be about much more than this goofy, still relevant show.