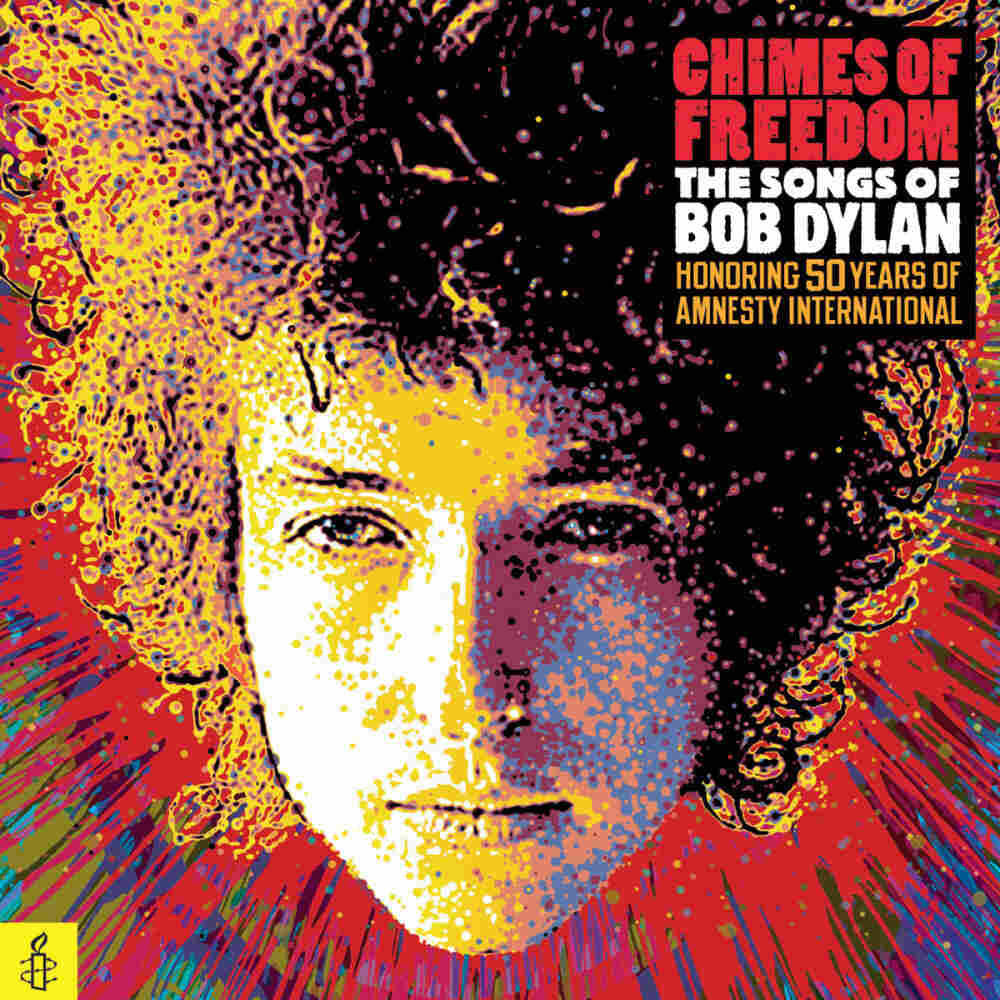 Two tracks into my first listen to Chimes of Freedom, the new 75-track, 80-plus artist collection that celebrates 50 years of both Bob Dylan's career and the good work done by human rights NGO Amnesty International, I realized I would not be able to absorb the thing. It's impossible. Even the guy who oversaw the project, music biz vet Jeff Ayeroff, has gone on the record saying he doesn't expect anyone to try.

"Whatever I've learned in the evolution of the album, I know people who pay $20 for this are not going to like every song," Ayeroff told Randy Lewis of the Los Angeles Times. He went on to suggest that listeners create their own compilations from pieces of the whole: a country-oriented version with Dierks Bentley and Miley Cyrus, whose excellent outing recalls her godmother Dolly Parton; one highlighting female voices from Natasha Bedingfield to Carly Simon and Bettye Lavette; or something with international flavor, matching Israeli Oren Lavie with Mexico's Ximena Sarinana. Or hey, just put that much-debated Ke$ha version of "Don't Think Twice, It's All Right" on your player 75 times.

Imagining a world of many different but equal Dylans is a fitting approach to the man whom this set honors (hip-hop fans will be frustrated, though; there's no version of Bob here for you). As Ayeroff noted, there have been and continue to be many Bob Dylans: the history maker, the poet, the rocker, the trickster, the folkie, the Christian, the Jew, the confessional artist, the tall tale spinner, the recluse, the road dog, the potential Nobel Laureate, the Victoria's Secret fan, the one who looks like Cate Blanchett, the one whose mullet reminds us of Prince. "All I can do is be me," Bob himself famously said. "Whoever that is."

The Dylan that came to my mind when I heard Chimes of Freedom is the one who writes throwaways. The anthology took me there, because its sheer size has insured the inclusion of all kinds of Dylan songs, from game-changers to deep album cuts. And maybe because they've been interpreted less frequently, the "lesser" compositions stand out. Whether it's Fistful of Mercy harmonizing mightily on the playful "Buckets of Rain," the Carolina Chocolate Drops laying it down on the talking blues, "Political World," or Bettye Lavette wringing emotion from the lovelorn "Most Of The Time," these versions reveal a Dylan who's not an icon, but a living, feeling, always creating, alternately hilarious and heartbroken guy.

I've always liked this Dylan, almost better than the paradigm-shifting genius who wrote "Highway 61 Revisited" or the oracle who spurred on social change with fiery testaments like "The Lonesome Death of Hattie Carroll." This Dylan is the guy who described his masterwork "Like A Rolling Stone" as "a long piece of vomit," and who said that it took him 10 minutes to write "Blowin' In the Wind." It's the Dylan who, like his friend Johnny Cash, his peer John Lennon and his prodigal brother Lou Reed, knows even pop that is assigned major historical significance is still about hooks and crazy rhythms, and had better stay light on its feet.

A Dylan throwaway, by my definition, isn't necessarily an obscurity, nor is it a track into which he and his various bandmates poured less of themselves. It's a song and a performance that throws off the heaviness of assignable meanings, a song that makes you smile, because of the way it messes around.

I started thinking about Dylan's throwaways two tracks into Chimes of Freedom, when my very favorite song firmly in that category jumped out of my speakers. "Leopard Skin Pillbox Hat" was the fifth single from Dylan's 1966 double album Blonde on Blonde, sequenced on the album between the epic "Stuck Inside of Mobile With the Memphis Blues Again" and the intense "Just Like A Woman." It's a mean little blues, based on a Lightin' Hopkins song, making fun of a fashionista whom most people assume to be the Warhol superstar Edie Sedgwick. (Certain Dylanologists, seeking something ostensibly deeper than a song about a girl, think it's about the African dictator Mobutu Sese Seko.)

I got hooked on Dylan via Blonde on Blonde and the sadder, slightly wiser Blood On the Tracks when I was in high school. I knew "Leopard Skin Pillbox Hat" didn't "mean" as much in the grand scheme of things as the Dantean "Visions of Johanna" or the hymnlike "Shelter From the Storm." But it was a blast. It was hilarious, it was unhinged, it featured some really cool organ. It had a punchline, too.

So to me, this is a Dylan throwaway — a song that doesn't belong to the masses, because you can't sing along with it at a rally; nor can it be claimed by the literature profs, unless they're Lewis Carroll specialists. On Chimes of Freedom, Raphael Saadiq does it just right. He milks the song for its cool and its electric tang, building it around a jumpy rhythm, the kind that gets couples dancing close. The words? He snarls them.

Like anything Bob, the idea of a Dylan throwaway has to remain flexible: if he really were a god, he'd be Mercury, after all — impossible to pin down. Your throwaways might be his more frankly sexy songs, like "Baby Let Me Follow You Down," delivered on Chimes of Freedom by Marianne Faithfull, who's had a lifetime to get its lecherous cool right. Or maybe his quieter, musically straightforward ballads feel blessedly light to you: Jackson Browne lends simple dignity to one of the best, "Love Minus Zero (No Limit)." Perhaps the genre exercises fit the bill: check out Steve Earle and the violinist and vocalist Lucia Micarelli going totally Morricone on Dylan's cowboy ballad "One More Cup Of Coffee 'Til I Go."

The other great value in Dylan's throwaways is that, paradoxically, they're easier to make into personal treasures. It's difficult to fall in love to an anthem, or heal a heartache with a tune that shaped a generation. But a song most people overlooked, or think is just a joke? That can become your own treasure.

Sometimes an interpreter's greatest accomplishment is to turn a classic into a throwaway — to strip it of predetermined meanings, make it smaller, let its greatness grow back from new shoots. On Chimes of Freedom, it's the women who do this most effectively. Maybe this happens because female musicians don't grow up with the privilege and weight of imagining themselves as a "new Dylan." Perhaps the lingering assumption that women have easier access to the tender side of the psyche makes it possible for standouts like Carly Simon who finds the soft speech within "Just Like A Woman," freeing it from decades of gossip and mythologizing, rendering it a love song again, or Cyrus, Diana Krall and, yes, Ke$ha (whose raw reading of "Don't Think Twice, It's All Right" is inarguably bolder than anything else here) to find the nerve endings in such familiar stuff.

Of course, there are plenty of Dylan worshipers who can't deal with the thought that their master would do anything that could be called a throwaway. I discovered a strange coincidence when I began chasing after this train of thought: searching the phrase online, I found that myriad writers have employed it over the years. However, it's always in some variation on this sentence: "Dylan's throwaways are better than everyone else's keepers." To me, such assertions belie a key aspect of Dylan's genius: the way he's always wriggled out from under the cloak of greatness, laughing at somber faces, lighting out for a new town on a never-ending tour. He's never been afraid to throw it all away.