Accessibility links
How To Fix 'American Idol': Ditch The Auditions : The Record A modest proposal for reinvigorating the struggling, but still-relevant, singing competition.

How To Fix 'American Idol': Ditch The Auditions

How To Fix 'American Idol': Ditch The Auditions 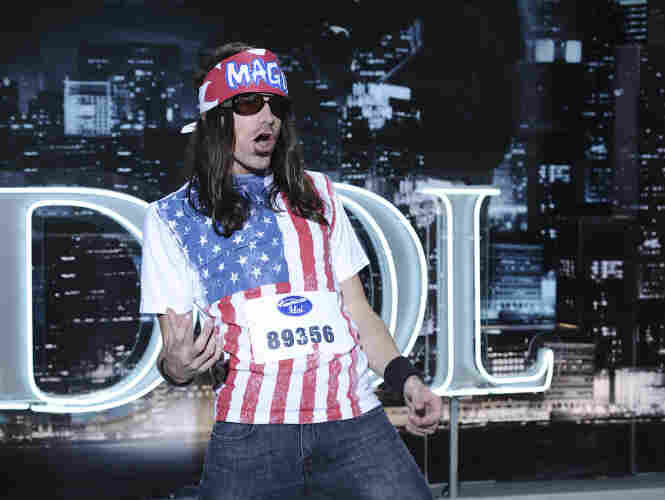 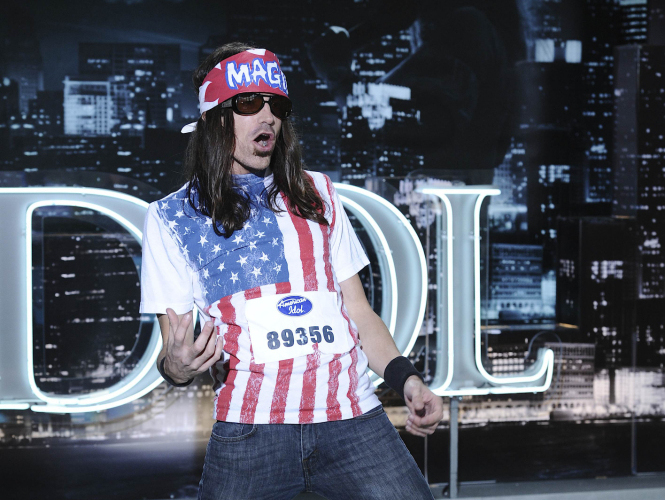 I was otherwise occupied during American Idol's regular airing time Wednesday, aware that my DVR was capturing the action from Aspen, Colorado. My heart sank, though, when I glanced at Twitter on my way home. My fellow Idol trackers were suffering — the phrase "worst show ever" popped up on an alarming number of feeds. The night's brightest possibilities (my favorites were the rough crystal hippie chick Haley Smith and the barely-seen soulman Devan Jones) still didn't blow minds; the joke contestants, like the air guitar wielding "Magic Cyclops," earned only the weakest of snickers.

The week's two other episodoes, one from San Diego and the other from Galveston-or-Houston (it was confusing! They were at Space City AND the seashore!), offered even less interest beyond a few sob stories, topped by that of a sweet Christian folkie who'd been born without visible ears. None of the auditions seemed destined for Youtube notoriety, much less immortality.

A middling week is not what Idol needs right now. Pundits have noted that the show's ratings have taken a hit, though it remains television's most watched series. My colleague Linda Holmes noted on the Monkey See blog that Idol is no longer a supernova, and speculated that bland judging, an aging audience, and narrowly cast contestants like 2011's triumphant country boy Scotty McCreery might be to blame.

Well, I have a fix — and it's radical surgery. I think Idol should ditch the roving auditions altogether. If that's too drastic, seriously rework the format.

Who watches these preliminary exercises anyway? Not most Idol devotees I know. We're in it for the full-on battle, which only commences after the narrowing process of Hollywood Week. Contestants' personalities inch forward then, as some struggle on the gallows and others parry and thrust their way through the annual group collaborations. Singers risk momentary revelations of their own styles. The shape of the season, defined by the group dynamic of the eventual Top 24, starts to emerge.

Until that point, Idol is a blur, every audition the same aside from the landscape glimpsed through the picture windows behind the judges' table. The mind-numbing monotony of Idol's attenuated rounds of roving auditions are a consequence of reality television's problematic relationship with, well, reality. As an actual nationwide singing competition, Idol must go wide in search of talent. Its democratic feel, however manufactured — and plenty of doubters think every new season is rigged — depends on the maximum number of hopefuls, from every corner of America, showing up for tryouts. If the viewer can't imagine herself on the Idol stage, a big part of the show's appeal fades away. Far-flung tryouts make that dream feel more accessible.

Like any preliminary phase of a selection process (cf. that battle for the White House going on right now), this one is necessarily repetitive, rife with false starts and extraneous motions. Excitement only comes from rare instant breakthrough (the first bow from golden-voiced Carrie Underwood or charismatic Kellie Pickler) or the more predictable, often controversial broad joke (William Hung's fractured take on "She Bangs," General Larry Platt's outsider-art "Pants on the Ground").

Otherwise, every minute creaks like an old body being stretched. We know that Ryan Seacrest will be perky and kiss a grandmother, that Randy Jackson will call everyone "dawg," and, only two seasons in, that Steven Tyler will lick his wolf lips at the ladies and Jennifer Lopez will giggle at the handsome guys. Since the process must unfold in its allotted time, there's no room for real surprise. That will come later, during the real show.

Yet the past two years have shown another way — on Idol's strongest competitor programs. The initial rounds of both The Voice and X Factor generate significantly more sparks. The latter contest puts strivers in front of a live audience from the get go, upping the tension and pushing singers into real performances. Quick editing lends a disorienting steroid effect to the crowd's roar, but it still resonates.

The Voice's auditions, in which the judges turn their backs to contestants (so that their looks won't spur or stall interest) and also compete to coach each winner, inverts Idol's formula altogether. Here, the judges are deeply invested in the early part of the game, and preconceptions and stereotypes don't hold as well, because of the "blind" element.

One reason for the dip in early Idol ratings this year may be that singing competition junkies have now experienced something much better. You can't keep us down on the floating Idol farm now that we've seen The Voice's fancy red swivel chairs.

What could Idol do to revamp its crucial first weeks? Shortening the season probably wouldn't fly with the honchos at Fox Television. Perhaps more time could be spent with genuinely viable candidates; since we know most have sung at least semi-professionally before their auditions, how about a sample of a previous effort? Or maybe a small band could set up in the audition room and the most vivid stars could sing more than a few bars of a song.

I'm not sure what the solution may be. All I know is that something has to give. Last year, American Idol produced its most commercially viable winner in years — as of this writing, Scotty McCreery's debut album has gone platinum, and there's a good chance he'll be voted the Academy of Country Music's New Artist of the Year. Yet many are saying Idol's a fading powerhouse. The truth is, Idol is the only televised singing competition that has made real stars, in virtually every genre, from rock to country to R&B to post-disco glam. That's the salient fact that Idol needs to put out front, from the first episode of every season. Remind us that this is a show worth watching for this singing, not just the quick cries and cheap laughs.