Accessibility links
All Her Children: Madonna As Pop's Reigning Mother : The Record As she showed last night at the Superbowl, for the last decade, the Material Girl has been writing her own legacy through collaborations with younger stars, and in doing so, she has helped to map the contemporary pop landscape.

All Her Children: Madonna As Pop's Reigning Mother

All Her Children: Madonna As Pop's Reigning Mother 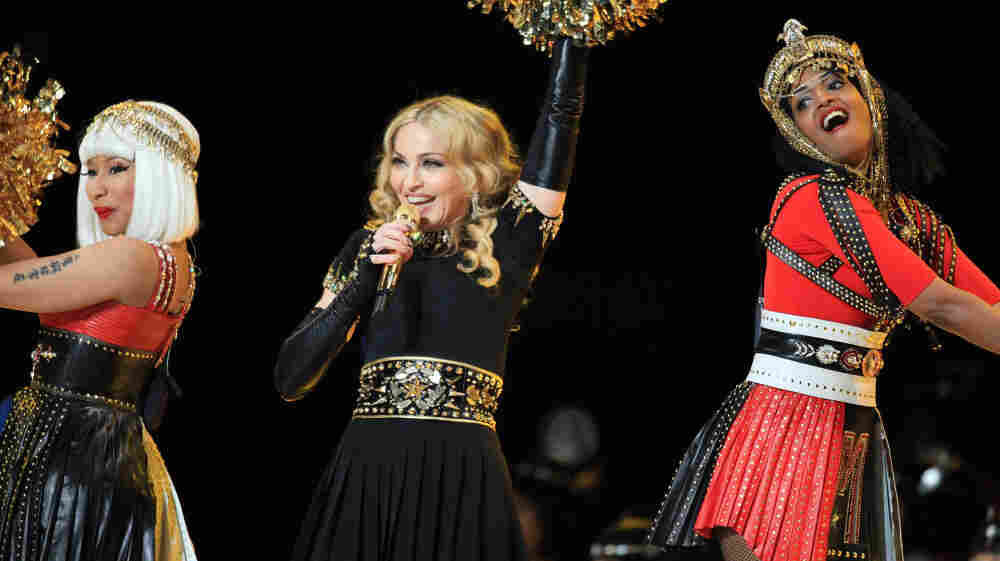 Madonna (center), flanked by Nicki Minaj and M.I.A., during a performance of her new single "Give Me All Your Luvin'" during the Bridgestone Super Bowl XLVI Halftime Show in Indianapolis. Christopher Polk/Getty Images hide caption 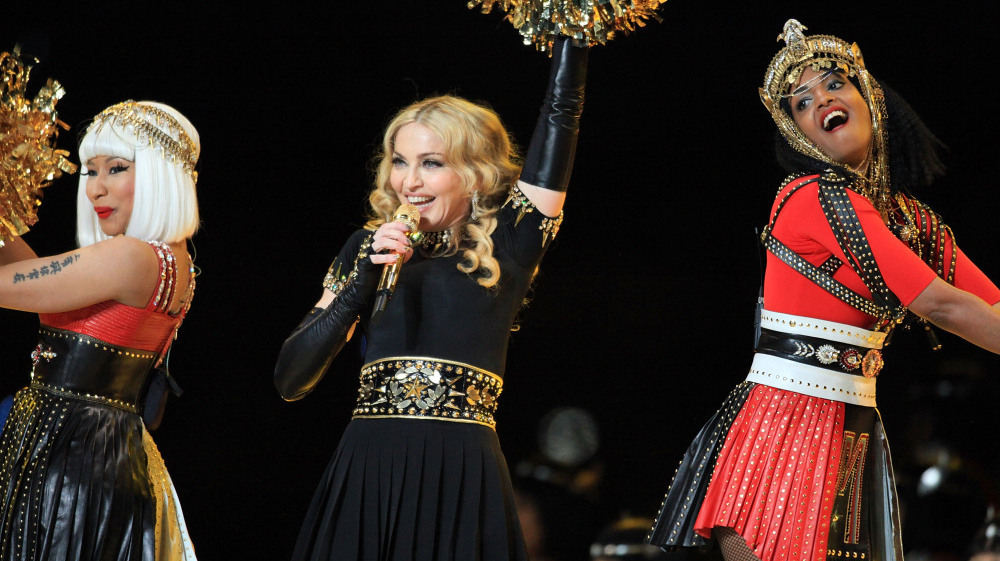 Madonna (center), flanked by Nicki Minaj and M.I.A., during a performance of her new single "Give Me All Your Luvin'" during the Bridgestone Super Bowl XLVI Halftime Show in Indianapolis.

At the time, it seemed far less important than it does now. A middle finger extended for just a moment during the Superbowl halftime show threatens to dismantle an empire, after provoking a day-long round of condemnation (and occasionally support) by media watchdogs and pundits. All that money spent on dancers and acrobats, all the old hits revisited, Madonna's remarkable agility on those bleachers, overshadowed by what seemed like a bit of spontaneous sass. America, you're so lightweight. Want to spend time with really rude impudence spewed on television? Check out iCarly, on Nickelodeon virtually every night..

But of course, this is the Superbowl, where inches can win or lose the game. It's hard to not wonder if maybe M.I.A. did know what she was doing. Her action read as a little bit of chaos dust thrown into Madge's carefully programmed overstimulation machine — not a surprise from the younger provocateur, who's joked about becoming a suicide bomber and never shown restraint when it comes to profanity. A revision of the trademark gun-firing gesture M.I.A. makes at the same moment in the "Give Me All Your Luvin'" video (she also does what offended Superbowl viewers in the clip, as she licks her lips, Material Girl style), the finger makes sense as part of her ongoing attempt to topple pop hierarchies from within.

Madonna hasn't issued a statement about the incident (nor has M.I.A.), but speculation abounds about her feelings, too. There's been a lot of huffing about disrespect, and some gleeful speculation that Madge must have approved, being an old hand at pushing boundaries herself. Both of these lines of thinking present a clear relationship between the two stars: Madonna is mom, and M.I.A. is the teenage brat acting out in ways that recall her elder's own crazy youth.

Realistically, this scenario's a stretch, since M.I.A. is 36 and a mother herself. Nicki Minaj, also featured on "Give Me All Your Luvin'" and offering some concisely nasty hip thrusts of her own during the halftime show, is nearly 30, twice the age of Madge's biological daughter Lourdes. Yet it's impossible to not think of Madonna as a parental figure now. She's finally grown into her divinely maternal name, and her collaborations testify to that.

Like her peers, Prince and U2, and her elder, Bob Dylan, Madonna is the rare pop star who's kept a viable career going long past the usual sell-by date (my colleague Linda Holmes celebrates Madge's longevity on the Monkey See blog today). These artists continue to make new music, but they're also busy guiding fans toward an understanding of the impact of their long careers.

Dylan is doing it through copious archival efforts, enlisting admirers like Martin Scorsese to shout his legend when he's not recounting it himself. Prince has become the reigning master of the retrospective live set, turning his concerts into rituals of remembrance and appreciation. U2 promotes its shatterproof band identity in its own myth-making tours and through projects like the recent Davis Guggenheim documentary about the making of Achtung Baby.

Madonna, ever the feminizing force in pop, is doing what all queen dowagers do: turning the world's attention to her heirs.

This phase began in 2003, with the notorious kisses she shared with Britney Spears and Christina Aguilera on the MTV Video Music Awards. The trio couldn't have devised a more blatant metaphor for the transmission of an inheritance: here was the madam of pop's brothel going in lips first, to show her protégés the ropes. The number began with Madonna's inheritors playing dress up in versions of the gown she'd won on the same program nearly 20 years before; entering in equestrian duds, Madge seemed as much dominatrix as doyenne. In retrospect, though, this is clearly a family portrait. There was even a favored daughter: the less perfectly blonde Christina was nearly forgotten in most post-show accounts.

A single with Britney followed: "Me Against the Music," aptly themed for two singers often accused of having inadequate pipes. (Another reason Aguilera didn't quite fit.) Madonna's next major duet was 2008's "4 Minutes" with Justin Timberlake, Britney's former beau and, to a certain extent, her male twin. Both songs imagine the two vocalists as an embattled but ultimately triumphant team, with the elder figure offering wisdom to the younger as they come to a new level of understanding.

Hard Candy, the album that featured the Timberlake track, was her take on contemporary urban music, and also featured input from Justin's partner Timbaland, the Neptunes, and Kanye West. Collaborations among artists are the stock in trade of this scene, and Madonna embraced that approach, featuring West and, later, Lil Wayne on tracks.

The connection she's forged with M.I.A. and Nicki Minaj, however, represent something more than just a couple of cool guest spots. Their performance together at the Superbowl was a mirror image of the Britney-Christina outing, with brown-skinned women in the daughter position this time (and brown-skinned men delivering music in the clutch, from LMFAO's DJ-ing to Cee Lo's gospel wail). Some have questioned Madonna's employment of artists who are stars in their own right as her support staff — the rapper Busdriver tweeted, "Apparently that was the sequel to 'The Help.'"

But the pageantry fits into Madonna's lifelong pattern of appropriating, translating, and giving back to a wide range of subcultures and communities.

Her virtual workplace was multicultural long before that was a mandated corporate goal. Nile Rodgers, the great black funk-rocker and disco pioneer, was one of her first significant producers. The other was the Nuyorican DJ Roberto "Jellybean" Benitez. She's also worked extensively with the soul master Babyface. As her Superbowl spread reminded us, Madonna found inspiration for "Vogue" in Harlem's queen-of-color ball scene. Such borrowings have made her suspect to some, but she's never hidden her vision of the world as a place where difference can and must be celebrated.

She's also lived that mandate. Besides being the Mother of Pop, Madonna is also a parent to four children of different racial backgrounds. Her daughter's father, Carlos Leon, is Cuban; her son Rocco's, Guy Ritchie, is a white Britisher. She's also adopted two Malawian children, David and Mercy. Madonna has faced criticism about the appropriateness of these adoptions. It may not be entirely fair to draw parallels between her personal and artistic lives, yet it's striking that in both arenas, she has chosen to cultivate diversity while remaining firmly at the head of the table.

This reality sheds a certain light on Madonna's recent penchant for high-profile partnerships with relatively youthful artists of color. She is both a symbolic matriarch and a real mom. She's realized these roles in complex and sometimes controversial ways. As Madonna publicly reflects on the lineage she's created — and it doesn't get more public than that football field — her choices are typically bold and challenging. Her arrogance remains amazing, but so does her scope. The symbolic family she created onstage at the Superbowl looked like the pop world she helped create — interracial, female-dominated, dance-oriented, blending progressive elements with worn and sometimes oppressive cliches. Her latest daughters seem to love her, even if in claiming their own selfhood they need to sometimes flip her the bird.