Accessibility links
Adele Sweeps The Grammy Awards : The Record Adele won every category in which she was nominated, including Record, Album and Song of the Year, and performed for the first time in months. 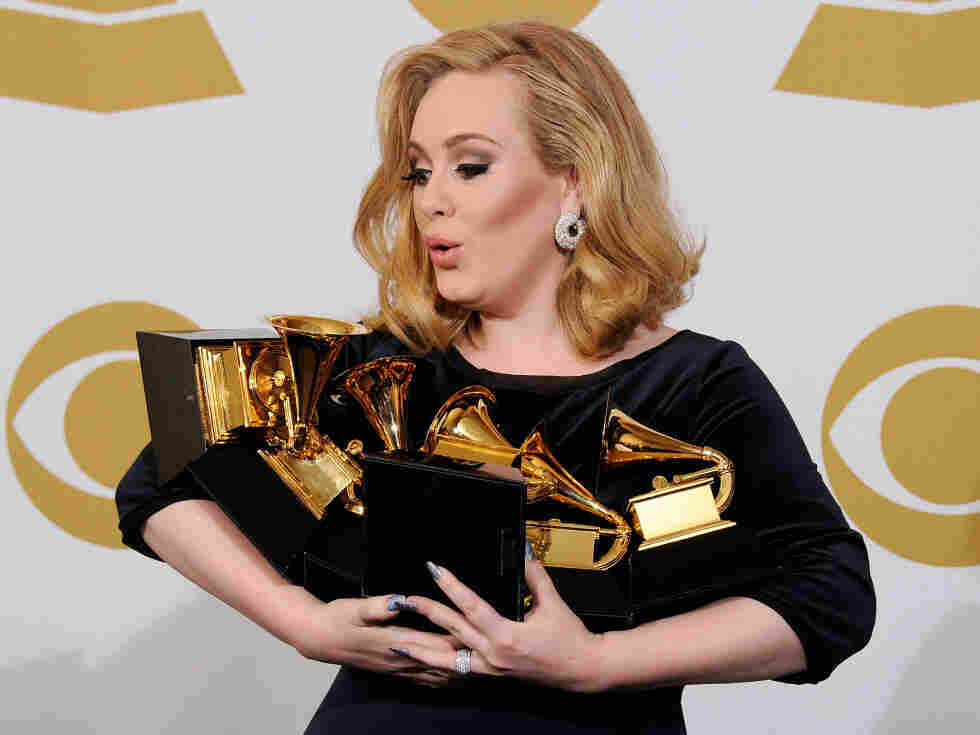 Adele won each of the six Grammys for which she was nominated, including the awards for Album, Song and Record of the Year. She also performed for the first time since canceling a tour last year to recover from throat surgery. Kevork Djansezian/Getty Images hide caption 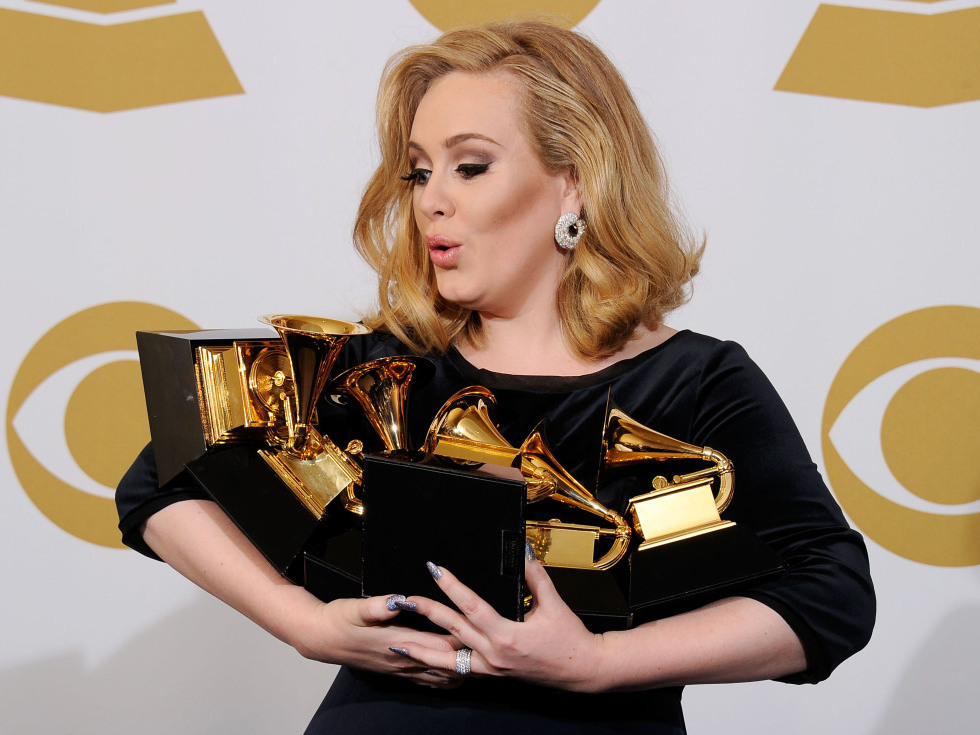 Adele won each of the six Grammys for which she was nominated, including the awards for Album, Song and Record of the Year. She also performed for the first time since canceling a tour last year to recover from throat surgery.

It was nice of everybody else to show up.

Adele, whose 21 is the fastest-selling album in eight years, went six-for-six at the Grammy Awards, including wins in the top three categories: Album, Record and Song of the year.

The coronation was tempered by the acknowledgment, throughout the night, of the loss of one of pop's most powerful voices. Whitney Houston, who died at age 48 in a Beverly Hills hotel on Saturday, was memorialized by Grammy host LL Cool J in his opening words: "Tonight, we ask ourselves: How do we speak to this time? To this day? There is no way around this. We've had a death in our family."

The question of how to balance celebration with mourning continued — sometimes gracefully, sometimes awkwardly — in the rest of the ceremony. Houston was mentioned by many of the other artists who took the stage. Bruno Mars and Rihanna both name-checked the late singer between highly choreographed dance routines, and Stevie Wonder mentioned her name in his introduction of Paul McCartney. A more straightforward tribute was held near the end of the show: Jennifer Hudson performed Houston's hit "I Will Always Love You," which won the Grammy for Record of the Year in 1994, pausing several times for emphasis or barely controlled emotion before pushing through to the end of the song.

The off-the-telecast story of the year was the elimination of many categories. This year, the National Academy of Recording Arts and Sciences awarded only 78 Grammys, down from 109 last year (click here to see the complete list of nominees and winners).

If reducing the number of winners was the goal, the consolidation might not have been necessary: artists familiar to the Grammy stage dominated most of the major categories. Foo Fighters won all four awards in the Rock category. Kanye West was named a winner in all four Rap categories (My Beautiful Dark Twisted Fantasy and its single "All of the Lights" picked up three; he teamed with Jay-Z on the Rap Performance of the Year, "Otis," for the fourth). Taylor Swift and Lady Antebellum split the Country awards. Skrillex, virtually unknown at this time last year, swept the three awards in the Dance and Electronic category. Sixteen-time winner Chick Corea, 14-time winner Tony Bennett and seven-time winner Kirk Franklin each nabbed two. Alison Krauss tied Quincy Jones for the most Grammys ever by a non-classical artist with her 27th award.

Foo Fighters might have been the only traditional rock band that mattered in the eyes of Grammy voters this year, but rock held a position of honor on the telecast — much more so than it did on charts or in sales figures. Tellingly, it was mostly classic acts that joined Foo Fighters in the spotlight — or maybe that welcomed Dave Grohl's band into it. Bruce Springsteen opened the telecast with a performance of his new single, "We Take Care of Our Own." The Beach Boys reunited for a medley of classic hits, joined by nominees Foster the People and Maroon 5. Paul McCartney closed the show with a performance of songs from Abbey Road that included a guitar-solo round-robin featuring Bruce Springsteen, Grohl and the Eagles' Joe Walsh.

How Social Media Saved The Grammys

"We've gone right into the Rock and Roll Hall of Fame Induction Ceremony," tweeted our own Ann Powers.

If the rest of the ceremony was cautious, two awards added controversy of very different sorts: The presence of singer Chris Brown — for a pair of performances and an award for Best R&B Album — earned the ire of some viewers. Brown pleaded guilty to assaulting then-girlfriend Rihanna on the night before the Grammys in 2009, and has not appeared at the awards since, but Brown's profile has risen and Grammy Executive Producer Ken Erlich told ABC News last week that it was time for him to return to the show: "I think people deserve a second chance, you know. If you'll note, he has not been on the Grammys for the past few years, and it may have taken us awhile to kind of get over the fact that we were the victim of what happened."

Justin Vernon, who records as Bon Iver, won two awards, for Best New Artist and Best Alternative Music Album for Bon Iver. Before the ceremony, Vernon expressed ambivalence about his nominations and declined an invitation to perform during the ceremony. That ambivalence reared its head in his acceptance speech for the Best New Artist award, in which he acknowledged musicians who would never be nominated and thanked Grammy voters for the "sweet hookup," as well as Jagjaguwar, the small Indiana-based label that releases his records.

Despite the solemnity of the tributes to Houston and the occasionally creaky pairing of younger nominees with legacy acts, it was Adele's relaxed, buoyant presence on the Grammy stage — even her announcement that she had "snotted" on herself during one acceptance speech was charming — that dominated the night.

She returned to the spotlight again and again to collect trophies, but it was her performance of "Rolling in the Deep," the Song and Record of the Year, that won her the biggest standing ovation. That's because it was Adele's first performance since she underwent surgery in October to repair damage caused by a hemorrhaged polyp on her vocal cords. The industry has been hungry for Adele's return since, and the public, too: While she canceled a tour to recover from the surgery, her album, 21, continued to dominate sales charts and radio. Now almost a year old, it has sold over 6 million copies and has been Billboard's No. 1 album in the country for the past six weeks.

By the time Adele performed, she had already picked up four of her six awards. She appeared alone on a darkened stage in a black dress and began singing without accompaniment, as if to prove that her voice had indeed returned, before being joined by a full band and four backup singers. Her voice sounded strong but reserved. If she was holding back a little, nobody seemed upset. For a night, it felt like the whole of the music industry was riding on her vocal cords. You can understand why everyone in the audience would want her to preserve that voice — there's no telling how bad things might get if it disappears again.

CORRECTION: A previous version of this article incorrectly stated that Alison Krauss had tied Quincy Jones for the most career Grammy awards. In fact, that record is held by the conductor Sir Georg Solti, who has won 31 Grammys. Krauss tied Jones last night for the most Grammys by a non-classical artist.