Accessibility links
Singled Out: Lambchop's 'If Not I'll Just Die' : The Record Kurt Wagner began writing the song over Christmas in Nashville and finished it nine months later.

Singled Out: Lambchop's 'If Not I'll Just Die'

Singled Out: Lambchop's 'If Not I'll Just Die' 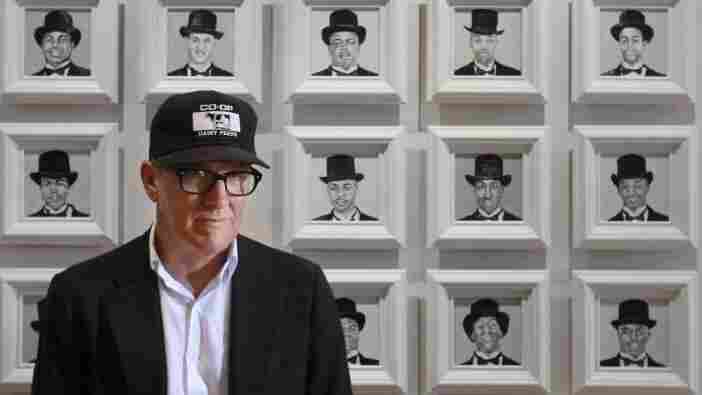 Kurt Wagner in front of some of his paintings. Courtesy of the artist hide caption 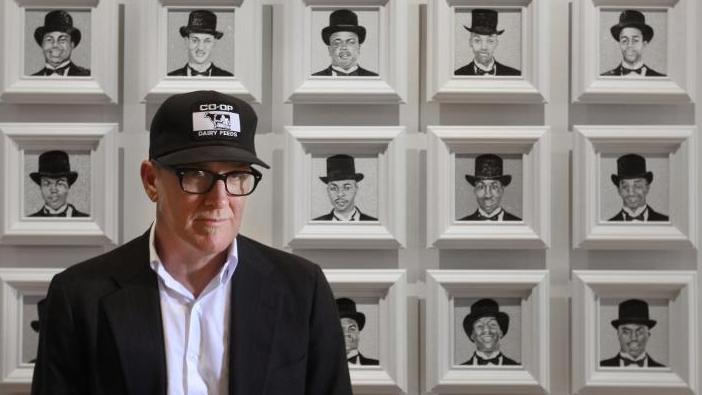 Kurt Wagner in front of some of his paintings.

Kurt Wagner, the singer-songwriter who heads up the 20-year-old Nashville collective Lambchop, says his group "never really gave a damn." Even so, its new album, Mr. M, is the result of years of Wagner carving out a life for himself as a musician and — sometimes — a painter.

The album, the group's 11th, is dedicated to the late Vic Chesnutt (Wagner and Chesnutt were close friends and the musical influence is unmistakable). Loss and an understanding of what suffering does to a person seep from the tracks. Intense string arrangements set the album apart from earlier Lambchop projects.

In a phone interview Wagner spoke to me about his songwriting process and trying to work his original career path into his music — photographs of his paintings illustrate Mr. M. Just back from touring Australia, Wagner chose to talk about the song that kicks off the album and that began as an experiment with longtime friend and producer Mark Nevers (who's also worked with Will Oldham, Calexico and the Silver Jews). 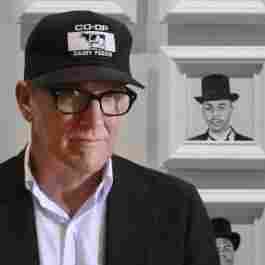 Kurt Wagner in front of some of his paintings. Courtesy of the artist hide caption

Kurt Wagner in front of some of his paintings.

If Not I'll Just Die

Kurt Wagner: I was just sitting in my office working on some writing, and I started capturing bits of what was going on. It was during a Christmas holiday in Nashville. My wife and I had invited all of her family to stay with us between Christmas and New Years. We all stayed in our house with 12 adults, five kids and four dogs. There was all this chaos going on. It seemed like an odd time to try and write a song. I was listening to Antony and the Johnsons on the headphones. There's different quotes from family members or descriptions of what's going on or commenting on the music I was listening to. I just wrote all that down. Later I organized that in some sort of song format. I worked on it for about nine months.

This is the way I like to write sometimes — to be observant about situations and to put that together in someway that's meaningful to me or representative of a feeling or an idea that I might have that I'm trying to express.

The last lines of this song are: "I represent you crying and / We were born to, we were born to rule." Did you have Vic Chesnutt in mind when you were writing?

Of course. Because he passed away during the course of making this record, it very much inflected the work that we were making. Vic was very close to both Mark and myself. It was in the air. It wasn't the starting point for the record, but by the end of the record, I noticed that this was something that obviously put these songs together in some sort of context.

The title to "If Not I'll Just Die" is a musical reference that happens at the very end of a Burt Bacharach song called "This Guy's in Love with You," which I put together with that song, believe it or not, prior to Vic's passing, which was sort of spooky.

Is there a reason you chose to begin Mr. M with "If Not I'll Just Die" and why you thought it would be a good song to talk about?

I think that song ended up representing the idea that both Mark and I had making this record. Mark had a sonic notion in mind. We discussed it early on, and when we got around to actually tracking this was the first one that we tried. It was almost an experiment in a way. It turned out well and we moved forward from there.

What was Nevers' vision?

In this case he'd been watching YouTube stuff on Frank Sinatra and he found this one song in particular ("September Song"), which fascinated him. The way the strings interacted with Sinatra's style — he found them to be almost abstract. The strings were almost counter to the melody. He had an idea about taking strings and deconstructing them and reconstructing them in a more twisted manner.

Wait, how does one go about deconstructing strings?

We tracked songs very sparsely and then sent them to a string arranger in London named Mason Neely. He sent back various layers of strings that were arranged but not to a point where they were refined. There were different layers of tracks, about 17 tracks. So, once we received the strings back, Mark went about editing them out and processing them through various guitar pedals and stuff like that, almost playing them like a guitar. He took that and deconstructed it and put it back into the music almost acting as a singular instrument.

We've used strings a lot over the years in a much more straightforward, melodic support manner, much the way strings are in solo records or country records. This time, Mark wanted to get more psychedelic.

Was it your intention when making Mr. M to make an album that was more about experimenting in the studio rather than playing for a live audience?

Most of our records — the last three or four — have been an effort to capture the sound of Lambchop as we play live. That's the basis we start with. This time, we went for a much more stripped-down approach and then we added to it as we went. My idea was that I wanted to maintain openness and sparseness of sound regardless of what we added to it.

Now that the record is out, are you thinking about performing it live?

We just did that in Australia and it went really well. Because the idea of openness of sound pervades the record, to me, there wasn't any reason to consider performing it with strings. One, because the way Mark deconstructed everything the arrangements didn't even exist. And also because of the idea that the sound stands alone. The whole idea is to preserve the song itself as opposed to production overwhelming the songs. That works when we play it live.

Mr. M includes black-and-white portraits that you painted. How does painting fit into your life as an artist and musician?

I started out wanting to be a painter and an artist. I went to art school and graduate school and got a degree in sculpture and painting. When I got out of school I was trained to be a college teacher in art, but I wasn't able to find a job doing that. I put that aside and became a construction worker and painted when I could.

As things turned out, I ended up being much more focused in the world of music and making records and painting became less and less a part of my life. I stopped painting completely in 2000. About three years ago, I started back up again. I was determined to make painting coexist with what I did with music.

When this record was being worked on, somehow these two ideas came together. I was in my painting studio and I started working on songs there. And suddenly there was a loose connection between the work I was doing by virtue of it happening in the same place at the same time. Toward the end of the record the notion occurred to me that I might try to combine the two ideas together and present them in some way.

Is there are particular aesthetic that you pursue in your painting?

I've got a pretty weird concept about painting. I use one tube of white and one tube of black. I apply the oil paint with an old dip-style writing pen. I average a couple of square inches per sitting. It takes a very long time and the paint is applied very thickly with a little writing pen. It's a technique that I refined as I continued doing it over the years.

For the most part I'm focused on figurative painting of historical figures. Most of the time it's imagery from photographs or newspaper clippings or some sort of found imagery that's either given to me or I stumbled upon. I collect this stuff and over time they become these little objects that may or may not become a painting. There's something about the imagery that means something to me beyond its obvious historical reference.

Your label, Merge Records, says Lambchop once called itself "Nashville's most f---ed up country band." Does that description still hold true?

I'm always shocked to see that resurface. I guess because of our elder stature someone has chosen to remind the world that yes, we were once Nashville's most f---ed up country band. I'm not sure it ever fit, but it was something that stuck. I guess it seemed appropriate at the time, because we weren't very ambitious, and our aspirations were simply just to make recordings and to enjoy playing music together. Hopefully, that is still somewhere in what we do. Obviously, we've discovered that we can do other things as well.