Accessibility links
Rihanna And Chris Brown: The Saga Continues : The Record When the singers released remixes featuring each other this week, the Internet's jaw dropped. 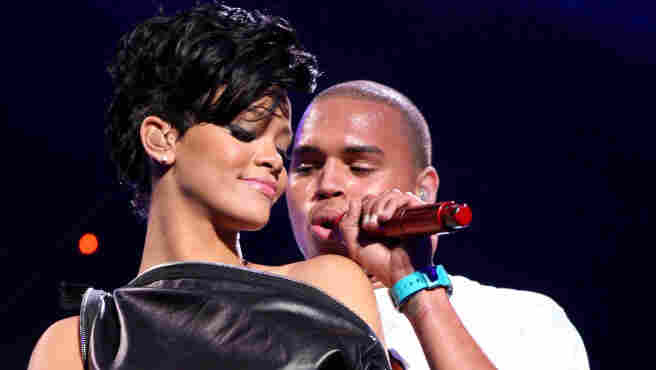 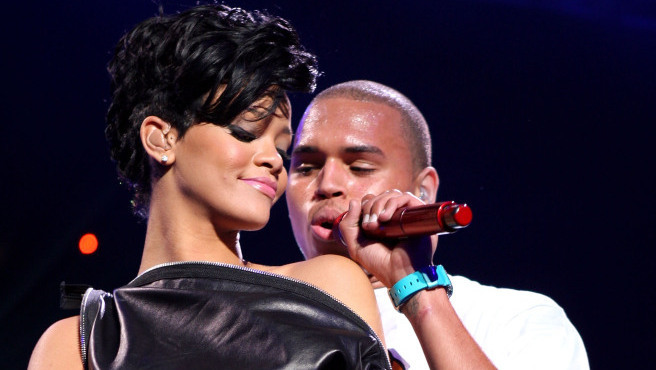 Rihanna and Chris Brown perform together in December 2008.

Just about three years after he violently assaulted her, R&B singer Chris Brown is back with pop star Rihanna — musically, at least. On Monday night, each released a new version of a previously released song. Both remixes feature the other party, and both are causing quite the stir.

The speculation built for days. Last week there were rumors Rihanna might release a remix to one of her songs and that Chris Brown would guest on it. Then right on cue, the day of her 24th birthday, Rihanna did it. She tweeted a remix to "Birthday Cake." Featuring a still-on-probation Brown.

But wait — there's more. That same day, Chris Brown tweeted a remix to the lead single from his upcoming album, a track called "Turn Up the Music." And yep, you guessed it. Rihanna sings the hook.

"Something is not right with them," says Natalie Hopkinson, a contributing editor at The Root. "These are two deeply disturbed individuals that probably need to get off Twitter and spend some time on someone's couch, working it out."

Like many other writers online, Hopkinson wasn't happy with Rihanna and Brown's musical reunion. Headlines called the songs "stomach-turning" and "unbelievable." They critiqued Rihanna's song in particular, for its lyrics that blurred the line between pleasure and pain, and could be interpreted as alluding to Brown's assault of her.

For Hopkinson, it wasn't just the explicit nature of the lyrics, or the message a reconciliation might send about domestic abuse.

But Maura Johnston of the Village Voice says we shouldn't rush to judge the singers. "I always am wary of attributing motives to people in pop," she says. "Especially now when you have ways that you can disseminate a persona that aren't necessarily your persona."

And disseminating personae is something Brown and Rihanna are extremely good at. Both are staples of the blogosphere, and each has millions of Twitter followers, who took to the duo's new music this past Monday with almost universal support.

One of those Twitter followers is Cherice McGlone, a sophomore at Howard University in Washington, D.C. For her, the duets were a sign of something more. "I feel like they've been back together for a while, but they're just now letting the public know. I'm cool with it," McGlone says. "I love black love."

But, she says, the remixes aren't only about love.

"The main goals of the songs were money, publicity. 'Why not draw attention to my song, generate more revenue?' I would do it," she says. "Makes more money, you know? The public is gonna eat that up. Whether good or bad, the public is gonna be talking about it."

Howard sophomore Earl King agreed. "They did it for love, cause they do love each other," he says. "They're gonna make money off it too — good money. And it might cause some backlash, but their fans are gonna support them."

Whether the songs are a wink, a kiss or a money grab, Johnston says she knows one thing is clear: "I don't think either of the songs is good at all."

Not that that will quiet the storm.