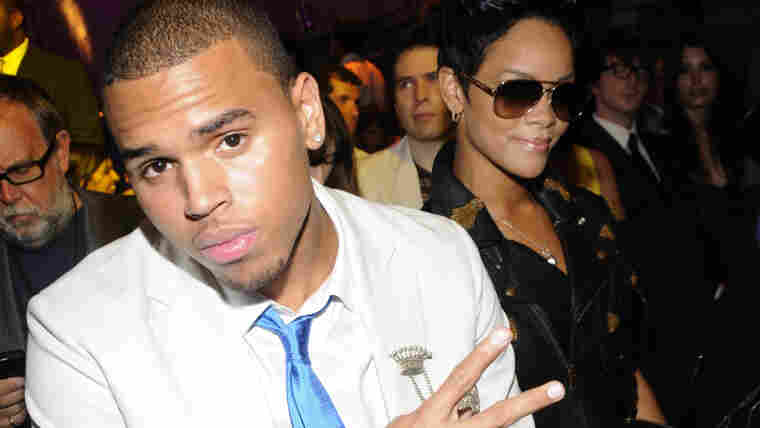 Chris Brown and Rihanna in the audience at the 2008 MTV Video Music Awards in Los Angeles. Kevin Mazur/WireImage hide caption 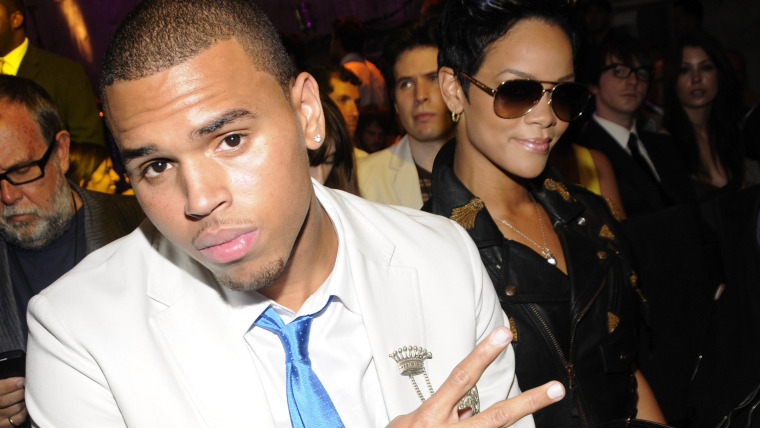 Chris Brown and Rihanna in the audience at the 2008 MTV Video Music Awards in Los Angeles.

The leaked release Monday night of two remixes that pair the self-proclaimed good girl gone bad Rihanna with her admitted abuser, Chris Brown, present an intense moral quandary for anyone who believes that pop music has real cultural impact. Never in my memory has the particular feeling surrounding these new songs — "dread" is a word often employed in the past week — been so pronounced. This is music many people wish did not exist.

Rihanna's X-rated "Birthday Cake" and Brown's more radio-friendly "Turn Up the Music" hit our ears like little bombs, exploding with context. They are provocations, demanding response. Even listening feels like a weighted choice, and, for most of us, the experience will be defined by the stance we'd chosen before we heard a note.

Opt out, most commentators have urged. "It doesn't matter that it's a great pop song," wrote Lucy Jones of "Birthday Cake" in the London Telegraph, adding, "Unless you're an imbecile — it'll be hard to wave your hands in the air in the clubs to 'Birthday Cake.'" "I'm headed to the bathroom to vomit," concluded Amelia McDonnell-Parry in The Frisky. Maura Johnston at the Village Voice dismissed the tracks as mediocre and deftly analyzed the viral impact of the songs, implicating all of us who've bit at this volatile catnip. "At least one of these remixes will be a massive radio track, and every blog post decrying the pairing will be part of the reason why," she wrote.

The vast majority of journalists who've weighed in are on the side of these writers, denouncing this musical reunion as a huge disappointment, an aberration, a pathetic nightmare, a tragic sign of Rihanna's further degradation, a cynical attempt to cash in on scandal — name your poison. On the other side are the fans who support the artists' own assertions that they are ready to move on.

As I hear it, however, "Birthday Cake" is not about moving on, and that's what makes it worth a listen — at least one painful listen — to better understand the confounding stance of a young woman who's become an emblem of victimization for some, and of rebellious self-determination for others.

Here's the history that led up to this moment. Chris Brown assaulted his then-girlfriend Robyn "Rihanna" Fenty on February 8, 2009. The muscular singer and dancer repeatedly beat her as she was trapped inside his moving car. He threatened to kill her. He bit her; he choked her. He only stopped when she screamed loud enough to wake observers.

Plenty of people washed their hands of this story after hearing details of the initial incident, and I think that's totally acceptable. I'm all for the general public ignoring "Birthday Cake" and Brown's much less interesting remix. Walk away from this relationship. Don't buy these songs. Turn off the television or radio when Rihanna and Chris Brown appear. Better yet, write your radio station and tell them not to play either of these remixes. Tell your daughters and sons that Brown is a brute and Rihanna is terribly misguided. If they push you, show them the sickening pictures of her bloodied face.

I'm choosing to do something else, though — to wrestle with the material at hand. As a music critic and, on a personal level, as someone who's long considered pop to be a crucial avenue for understanding the intricacies of the human heart and soul, I'm committed to engaging with the music that makes us sit up and take notice. I'm willing to try, even if those songs expose or even encourage aspects of behaviors that aren't so savory. I don't think "Turn Up the Music" tells us much; "Birthday Cake" is a different matter. So I'll continue trying to grasp what's happening in a song that makes many — but not all — of us want to turn away.

The truth is, "Birthday Cake" is not a surprise coming from Rihanna. For better or worse, she's never really embraced the role model role so many people want her to assume. After the assault, she did eventually separate from Brown — not because she wanted to, but because she worried that her staying with him would encourage her fans to accept similar dangerous situations. She told Diane Sawyer on 20/20 that she'd reversed her "selfish decision" to stay with Brown because she feared it "could result in some young girl getting killed."

Brown, meanwhile, pled guilty to his crime and was sentenced to probation and community service. With help from his many music-industry friends, he continued his career. He's currently on the cusp of a comeback that included a recent Grammy performance and win. Throughout this period, he has expressed remorse, but also behaved in frighteningly belligerent ways toward those who question his good intentions. He's made some catchy music that doesn't show much self-awareness or depth of artistic character.

Rihanna, on the other hand, has not only gone on to become one of the world's most commercially successful entertainers, she also has embraced controversy by openly exploring her ambivalent feelings about Brown, and about sexuality in general. "Birthday Cake" isn't what disqualifies her from "role model" status. She's been something else for a long time, as her music has grown more sexually explicit, transgressive and politically incorrect.

The story [Rihanna] wants to tell is the one in which the endangered woman doesn't get out, or leaves for a while but comes back, or at best does leave, but can't resolve the mixed feelings she has about her choice.

The songs Rihanna has chosen to record, and has sometimes co-written, are not ones I play for my own daughter (though yes, she's heard them on the radio, and we've talked about them). They're rarely, if ever, feel-good anthems encouraging self-empowerment. Rihanna has basically abandoned such efforts, ceding that ground to her friends Katy Perry and Beyonce. Instead, she's entered into a space previously occupied by many blues women, country singers and girl groups, where women attempt to uncover the truth behind emotional violence, without necessarily comprehending ways to escape it.

Rated R, the album that most closely followed Rihanna's assault, was a heavy effort exposing the costs of sexual abuse, but also acknowledging the allure of the abuser. (Its first single is called "Russian Roulette.") After that came two more albums, full of songs that grew ever more pornographic, from "Rude Boy," with its taunt of, "Can you get it up?" to "Only Girl (In the World)," with its plea for a lover to "take me like a thief in the night."

Rihanna's biggest hits have directly confronted the theme of sexual violence. At times, she has presented herself as a victim's champion. "Man Down" is a revenge fantasy in which she does in a rapist. "We Found Love," her ebullient dance floor anthem, turns on the moment she walks out on her bad boy: "I had to let it go," she whispers as the beat whisks her away.

Often, though, Rihanna's stance has been far more conflicted. "Love The Way You Lie," her collaboration with the equally violence-obsessed Eminem, was a classic ballad of codependency. She expressed a fondness for formal bondage and discipline in "S&M," but usually the chains she described were imaginary. In "Fool For Love," the ballad that closes her latest album, Talk That Talk, she moans the words, "Mama, I found a man," employing the same melody Freddie Mercury used to sing, "Mama, I've killed a man" in "Bohemian Rhapsody." Love is murder, indeed.

What's upsetting for those of us who admire Rihanna's talent and boldness — and for me as a feminist — is that she has clearly not taken up the narrative of women's enlightenment and self-liberation. Quite the opposite — the story she wants to tell is the one in which the endangered woman doesn't get out, or leaves for a while but comes back, or at best does leave, but can't resolve the mixed feelings she has about her choice.

This is the woman who made "Birthday Cake," and who's invited the man who once so brutally harmed her into its fantasy realm. The song, if you haven't heard it, is very dirty. Originally a short blue interlude on Talk That Talk, it's been expanded into a dialogue, but there's no point of connection, just thrusts and parries that feel as hostile as they are hot.

As far as seductions go, this one is cold as a walk-in refrigerator. Pushing against a mechanical handclap beat, Rihanna's multi-tracked voice forms another rhythm, like a bully's taunt: cake-cake-cake-cake. Appetite, not tenderness, directs this encounter. It's worse than break-up sex. It's sex with that person you broke up with a long time ago, but can't help hooking up with again, though you regret it every time.

This dead-feeling song may very well repulse you. I prefer it, however, to the bland redo of Brown's "Turn Up the Music," in which Rihanna gives an undeserved assist to an empty-headed club banger. That song plays out their relationship as normal. "Birthday Cake" presents it as pretty damn creepy. Which comes closer to the truth? We honestly don't know, but I know which one I choose to believe, though it saddens and frustrates me.

And can we leave it at that? I think so. It's a hard-to-digest moment in an ongoing story that none of us who write about or listen to music can control. Maybe it's time to search for other narratives. Put on Kelly Clarkson's "Stronger (What Doesn't Kill You)" and scream along. Pick up the phone and call your sister and make sure she's okay. Donate some money to your local women's shelter. Recognize that pain and bad decisions are a part of life, and that those "role models" we pull from the ether of mass culture will inevitably fail us. They are only human, sometimes shockingly so.