Accessibility links
'Idol' Reaches The Death Rounds, And A Real Girl Problem Emerges : The Record American Idol's Judgment Week narrows down the field of contestants to 25, and illuminates the problem with the show's female contestants. 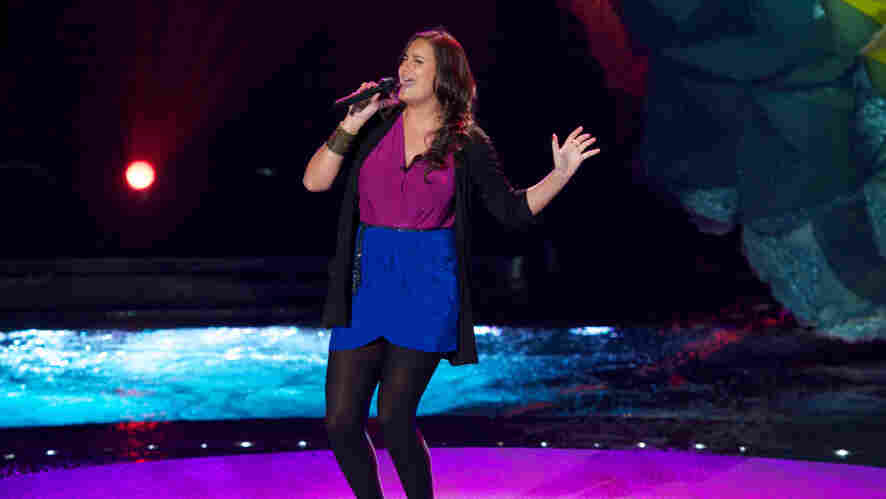 It's like a charm school talent show out there on this season of American Idol, but Jen Hirsh is showing signs of personality. Michael Becker/Fox hide caption

Hand on the fast-forward button: that's how I watch American Idol's death-round episodes. The apex of each season's early exercise in emotional manipulation, Judgment Week apes that old Wide World of Sports ad, played on repeat over three hellish hours: it's the week where the judges usually hone down the list of contestants to a final 24 before the public starts voting. But witnessing the thrill of victory and the agony of defeat is just not that fun when you still barely know anything about the contenders.

The rejects' goodbyes are especially excruciating. It's like walking into a nightclub restroom and finding some poor puddle of tears whose lover has just run off with the barkeep. You have no connection to this terrible moment, yet it pushes right up against you. Laugh, and you're just being heartless; cry and you've been duped into caring about total strangers, most of whom you'll never see again. Worse, it's impossible to ignore the show's manipulation, which can make the more sympathetic response seem even more poisonous.

Judgment Week turns nearly every contestant — winners and losers — into a blubbering mess, so I just sped right past the crocodile tears of puerile new dad Adam Brock, who got through, and the genuine torment of talented if odd gospel colossus Jermaine Jones. I turned to Twitter to inform me of which squeaky teen triumphed in the round pitting would-Bieber Eben Franckewitz against mini-Michael David Leathers, Jr.

I also felt a connection with the other 14 million viewers shrugging their shoulders in disinterest (hey, those ratings keep slipping) when the week's "big twist" was announced: the reinstatement next week of one cut male singer. The four contenders in this category don't seem like eventual winners. Simon Cowell ate delicious crow when he begged Melanie Amaro to return to The X Factor, which she then won. Idol's similar move, though, just feels like another stunt. So we'll wait to see which guy will be brought back and then probably eliminated the following week.

There's not a clear leader yet within the secure bunch either. My heart belongs to Heejun Han, the season's obligatory comic relief, because beneath his wry façade he's obviously thoughtful, and he has a lovely vocal tone. (Also: a first-ever Asian-American Idol would be cool in this year of Linsanity.) The R&B troika of Deandre Brackensick, Aaron Marcellus and Joshua Ledet also intrigues me, but I've backed so many Idol soul men only to watch them fall in the competition's early rounds.

Or better yet, let's see a woman up there.

Yeah, it's not gonna happen. This year's female contenders seem like such a bland bunch so far. There's no tough hippie chick, no manic pixie dream girl, no knock-your-socks-off squaller. Only one woman of color made the Top 24: Jessica Sanchez, a half-Latino, half-Filipino teen in the multicultural Disney ingénue mold.

I like the jazzy-belter Jen Hirsh, because she's a grown woman who occasionally displays some personality. Otherwise, I've had a hard time keeping track of which charm school graduate is prancing by in dress shorts, her hair sticky with silicone spray.

It's de rigeur these days to mourn the fact that a woman hasn't won Idol in five years. But increasingly, it's the show's own damn fault. Its producers are so desperate to find another Carrie Underwood – Idol's biggest commercial success – that, metaphorically, they've dyed the show blonde.

Now, blonde can be fine, especially if it's got a dreadlock twist, the way Crystal Bowersox does it. It can even be confrontational, if it's platinum bold. But when it represents accommodation to the narrowest of feminine ideals? That's when I reach for the remote and switch over to The Voice.

Literally blonde or not, this group leans heavily toward a conservative vision of the feminine: pliable, perky but never rebellious, waxed and tanned and pretty in pink. Country cuties dominate. Baylie Brown is a former cast member of The Singing Bee, a Country Music Television karaoke show. Chelsea Sorrell sang in North Carolina hunk Chris Lane's band. Though Skylar Laine's background is in musical theater, the Mississippi native's image has been tweaked to fit the most clichéd of backwoods Barbie stereotypes.

I'm not hearing or seeing a natural star like Underwood – or even last season's Lauren Alaina — in this bunch. Nashville might be where many want to end up, but most come off like extras in a late-period Aerosmith video. I can only hope one turns out to be an elf princess.

Here's something the Idol team needs to realize: Carrie Underwood is a unique talent. She's risen to the top of the Nashville heap because her blend of wholesomeness and crossover glamor is not easily replicated. Plus, she has a voice that's nearly as powerful and golden as Mariah Carey's. She's that rarest of Idol winners: a born star who really didn't need the show to succeed.

Is it too much to ask for a female Heejun Han – a real character, who can stand up to what Idol wants to make of her, even if only in whispered asides and eye rolls? I'm hoping for a surprise next week: a daring song choice, a few crazy dance moves. Idol still needs a kick to really get started this season. There's no reason that it couldn't come from someone in a pair of Manolos.