Accessibility links
Music In Political Campaigns 101 : The Record In light of recent squabbles, here's a primer on music and copyright law for political operatives. 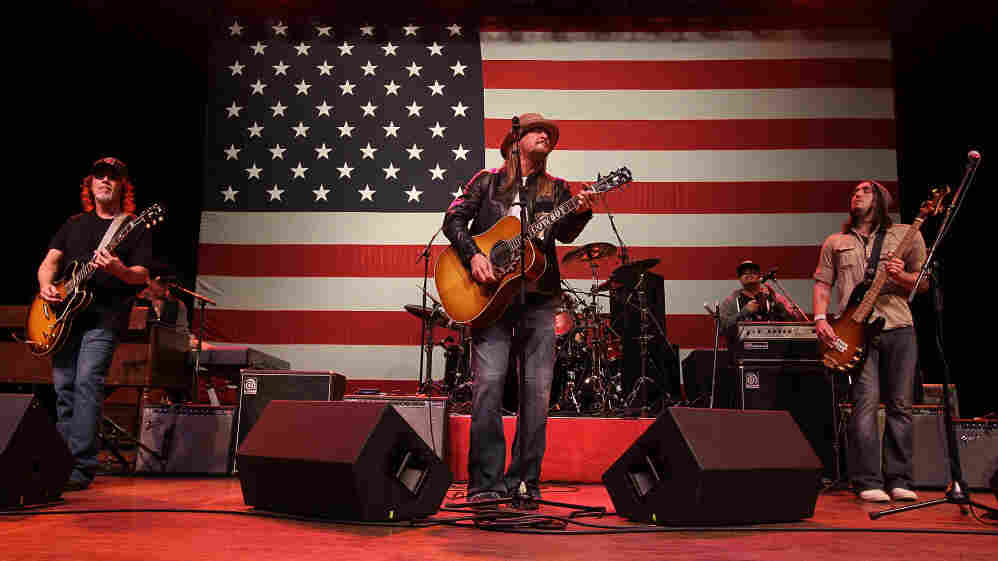 Kid Rock performs during a campaign rally for Republican presidential candidate Mitt Romney in Michigan Monday night. Romney asked for, and was given, permission to use the Detroit rocker's song "Born Free" in his campaign. Justin Sullivan/Getty Images hide caption 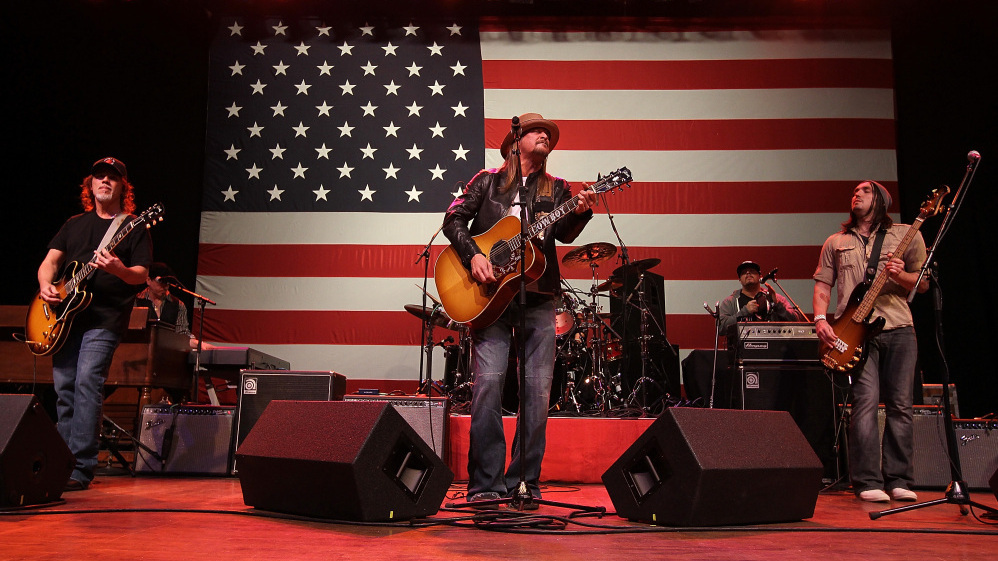 Kid Rock performs during a campaign rally for Republican presidential candidate Mitt Romney in Michigan Monday night. Romney asked for, and was given, permission to use the Detroit rocker's song "Born Free" in his campaign.

If you're a candidate for president, there's a good chance you've been sued — or at least threatened — by a musician. Republican hopefuls Mitt Romney and Newt Gingrich have both been asked to stop using popular songs at their campaign rallies. A long list of musicians, including Jackson Browne, Don Henley and David Byrne, have taken political campaigns to court over the years for using copyrighted songs without permission.

With that in mind, here's a primer on music and copyright law for political operatives.

Rule No. 1: Know your venue. Where you play a song can matter as much as what you play. Gingrich's campaign is being sued for copyright infringement by a member of the band Survivor for using the song "Eye of the Tiger" at campaign events without permission.

Copyright experts say you don't have to ask an artist's permission to play a popular song at your rallies — as long as the venue where you play it has what's known as a blanket license from the performing rights organizations ASCAP and BMI. Peter DiCola, who teaches law at Northwestern, says most public venues do have those licenses. But small or unconventional venues may not, including a few that are mentioned by name in the Survivor lawsuit.

"The complaint is cleverly written actually," says DiCola. "The venues they mention include Gingrich using the song in a Moose Lodge and an excavation plant. And those are public places that might not as a matter of course acquire blanket licenses."

If the venue does not have a license with BMI and ASCAP, then the campaign has to negotiate its own. Which brings us to ...

Rule No. 2: Sometimes you have to ask for permission. This is especially true if you want to use a song in a television commercial. In that case, you have to pay royalties to the songwriter and to whoever owns the sound recording, usually a record label. Lawrence Iser, an entertainment lawyer in Los Angeles, says, "Just as if you were making commercials for any product you can think of — if you wanted to put that onto television, you want to put commercials on YouTube, you want to make any kind of audio/video work that contains music — you do need to have licenses, you do need to have permission."

Iser should know. He represents Jackson Browne, who sued the Ohio Republican Party for using the song "Running on Empty" in a campaign ad for John McCain four years ago. Iser also represents David Byrne. The onetime singer of Talking Heads sued former Florida Gov. Charlie Crist for using "Road to Nowhere" in an ad for Crist's Senate campaign.

Both the Browne and Byrne cases settled for undisclosed amounts. And Crist was forced to post a videotaped apology on YouTube. That brings us to ...

Rule No. 3: Know when to fold 'em. Even if your campaign is sure its venues have the proper licenses, and you're not using any copyrighted material without permission on TV, your candidate can still wind up in hot water.

"The heart of trademark is supposed to be consumer confusion," he says. "The idea would be that fans or listeners or just the general public would be confused that K'Naan was endorsing Mitt Romney. And he described his fans complaining on blogs about 'Why did he give a license to Romney?' And 'Why would he give permission?' "

Some of these artists' claims may not have much legal merit, says Sherwin Siy, an expert on copyright law at the nonprofit Public Knowledge in Washington, D.C. "They're just throwing that out there to say, to make a statement," he says. "To say, by the way, this music they're trying to use as the soundtrack to their campaign, the musician doesn't support it."

But no matter how flimsy the legal case, Siy says it often makes more sense for a political campaign to back down anyway. "The optics of it are so bad that there's really not much point in continuing to use a piece of music when the musicians really don't want you to."

That seems to be the conclusion Mitt Romney's handlers reached. While campaign officials said they were legally entitled to use "Wavin' Flag," they said they'd stop doing so, out of respect for the artist.

Some Republicans have complained that musicians are singling them out. But the soul duo Sam and Dave did send a cease and desist letter four years ago to Barack Obama's campaign, demanding that the Democrat stop using the song "Hold On, I'm Coming" during his first run for the White House.