Accessibility links
Decision Fatigue: The Reality Of Reality Television : The Record As American Idol enters its semi-final phase, we reflect on the endless options, from Internet to contestants on televised singing competitions, that divide our attention so effectively that real connections can feel impossible to make. 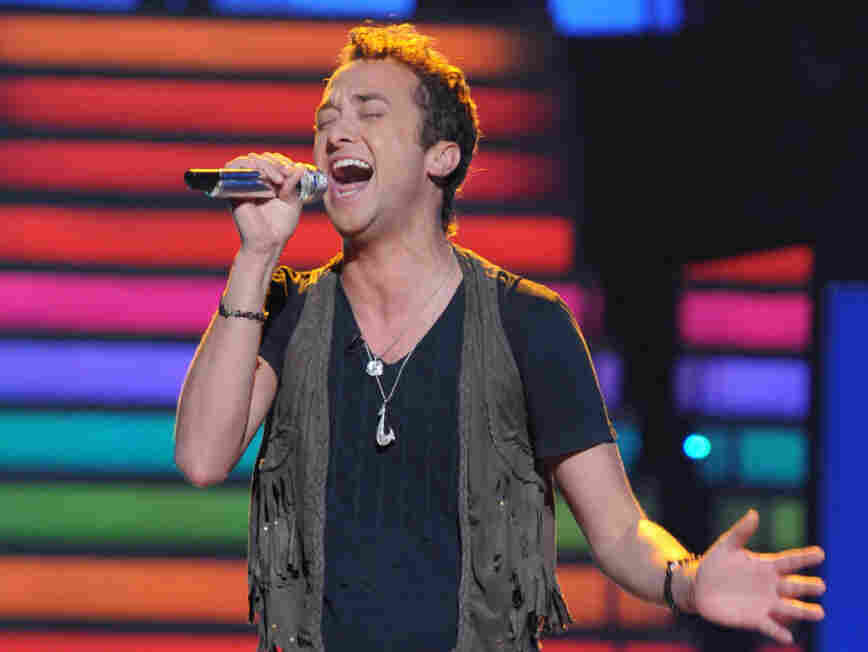 It hit me halfway through the last round of contestant selections on Monday's episode of The Voice: a muddy-headed feeling, the sense that I couldn't continue one second more. What washed over me was reflected in the behavior of the judges onscreen. "I didn't hit my button," became the judges' dazed refrain to explain why a perfectly excellent singer stood there wondering why no one had selected him to compete. The punch-drunk mood on the selecter's panel made me think of a Hitchcock movie, at the point where the hero realizes that some sinister force has overtaken his very soul.

Decision fatigue: that is the mental state I witnessed on The Voice, and too often feel in my own life. Science writer John Tierney reported the phenomenon in The New York Times last summer. It's the sense that your willpower has been sapped by the million little choices you have to make in a given day.

"We have no way of knowing how much our ancestors exercised self-control in the days before BlackBerrys and social psychologists, but it seems likely that many of them were under less ego-depleting strain," Tierney writes. "When there were fewer decisions, there was less decision fatigue. Today we feel overwhelmed because there are so many choices. Your body may have dutifully reported to work on time, but your mind can escape at any instant. A typical computer user looks at more than three dozen Web sites a day and gets fatigued by the continual decision making — whether to keep working on a project, check out TMZ, follow a link to YouTube or buy something on Amazon. You can do enough damage in a 10-minute online shopping spree to wreck your budget for the rest of the year."

If, like me, you're a pop culture maven permanently cruising the information highway, decision fatigue is as likely to get you as is carpal tunnel syndrome. Scanning my Twitter feed, refreshing websites, I make dozens of choices per hour about where to direct my mental energy. Do I listen to the new Springsteen single that just dropped? Pause to read an important new analysis of music copyright law? Allow myself to indulge in a little bit of frivolity over at Feminist Ryan Gosling? The trackpad-ruled rhythm of a normal day mitigates against clarity and focus and leaves me drained by dinnertime.

Tuning in to both American Idol and The Voice these past few weeks has only worsened my condition. In their early rounds, both singing competitions push through myriad interesting characters who compel me to make more choices — if I invest any interest in any competitors at this point, I will likely soon feel the twinge of their elimination. But I do invest, because the shows themselves, with their dramatic edits and myriad shots of auditioners trembling and crying, force heightened emotions upon me. I judge, as the judges judge, and as their assessments progress toward empty babble, so does my own inner monologue.

Thank goodness that this phase is over. American Idol is in the semifinals round, with 25 true competitors singing whole (if abridged) songs on the big stage. Last night the boys performed, tonight the girls get their chance. It's still too early to call even the top five, but at this point the baker's dozen who made their case felt luxuriously relevant.

After so many fragmented hours of semi-sudden death, I finally unclenched my grip on the remote as Reed Grimm took several whole minutes to offer his cartoonish take on "Moves Like Jagger"; Deandre Brackensick kept the shine on his falsetto throughout Earth, Wind & Fire's "Reasons"; Creighton Fraker calmed down and showed class while belting out "True Colors" and Jermaine Jones, the surprise returning striver, smiled steadily through a mellow take on the Idol favorite "Dance With My Father." By show's end, I felt the way television should (but in truth rarely does) make you feel — like I'd taken a break to absorb something halfway meaningful.

My relief allowed me to reflect on how I move through life in the age of the instant click. Addicted to new information, always hoping for a novel thrill, I don't sink into any one narrative too often. This is true of my work life on the laptop, and increasingly of my couch time too (as if one can be distinguished from the other). I tweet or "talk" on Facebook while I watch TV, and I fast-forward through boring stuff.

But boring stuff matters within the healing process narrative provides. A slow scene in a film — say, the ones in Moneyball where Brad Pitt is just driving aimlessly through industrial Oakland — allows the viewer to rest the muscle of her consciousness. Still engaged, I can breathe and think. This is when pop culture starts to mean something, connecting to my own opinions and experiences. I make that meaning in dialogue with whatever film, show, even song has grabbed my attention, in the space between what images and stories it presents and my own ideas and memories.

Reality television is rarely art, but it does often take hold of part of my day (and yours?), and its structure — whether it leaves space for thought — determines its effects. In the realm of singing competitions, we've just entered a healthier phase. Devotees like me can now hope to find a star, or really grasp a personality. Or just enjoy someone's interpretation of an almost complete song.

Tonight's Idol round should feel similar, with the girls getting their first brief taste of the spotlights. Next week The Voice begins its two-person Battle Rounds, a stage of competition that remains more frantic than where Idol is now, but has more focus, with a real payoff. I'll be watching. I may even be able to invest a little emotion. Don't expect me make any decisions about my favorites yet, though. I'm still giving decisions a rest.