Accessibility links
At SXSW, Bruce Springsteen On The Meaning Of Music : The Record At SXSW, Springsteen gave a keynote address that traced the music most important to his career. The man many view as rock's ideal took the microphone for nearly an hour to stump for his love of all flavors of pop music. Watch the entire speech here.

Bruce Springsteen On The Meaning Of Music 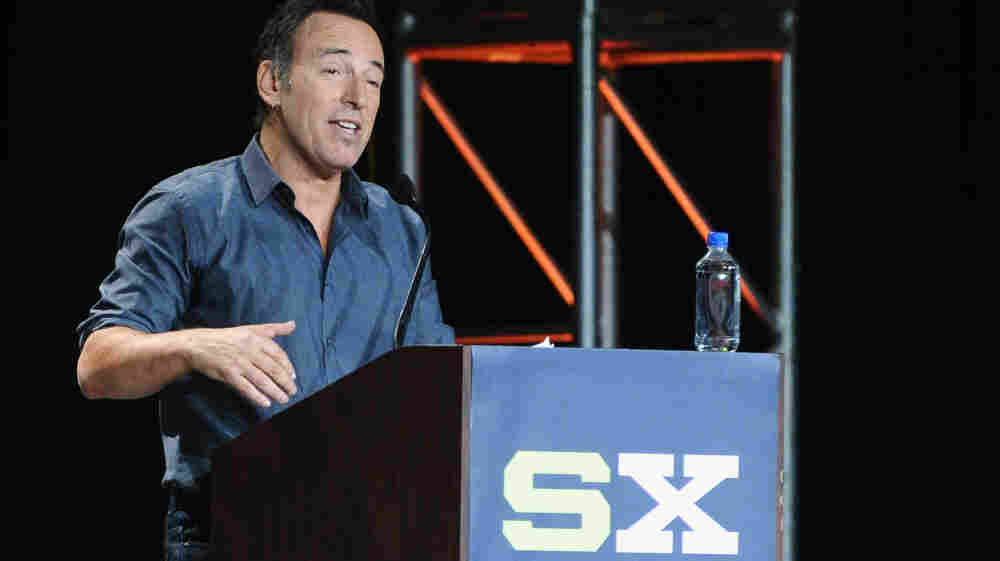 "Human expression is not confined to guitars." In his keynote address at SXSW Bruce Springsteen spoke of his love for pop of all flavors. Michael Buckner/Getty Images for SXSW hide caption 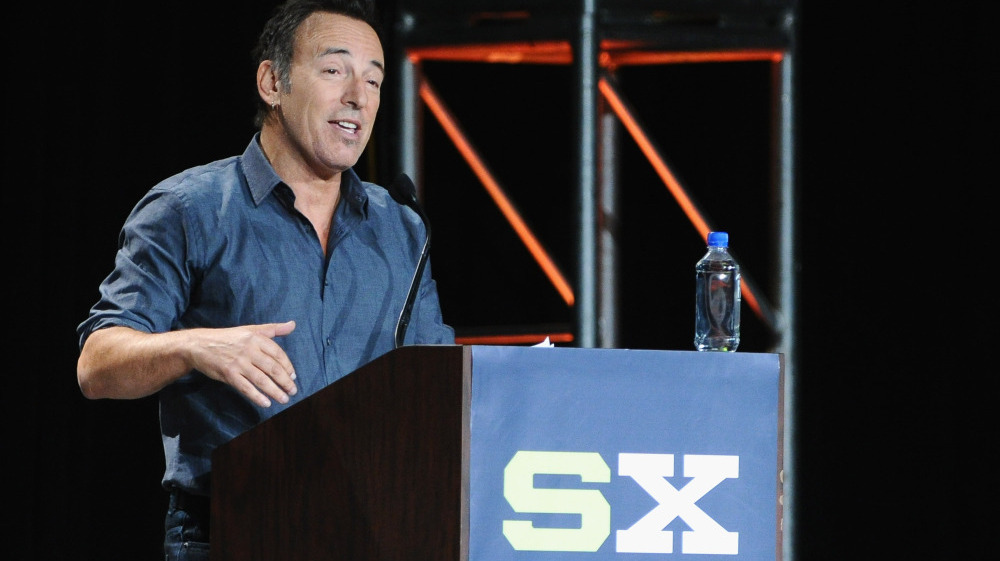 "Human expression is not confined to guitars." In his keynote address at SXSW Bruce Springsteen spoke of his love for pop of all flavors.

LANGUAGE ADVISORY: This is a live recording. It contains audio that may not be suitable for all audiences.

Bruce Springsteen offered much to take away from his keynote address at Austin's annual South by Southwest music festival. He advised young musicians to believe in their own greatness — and to admit it when they suck. (Springsteen used that word frequently during his apparently wholly self-penned speech.) Chronicling his own artistic development, he talked about how doo-wop taught him about sex, country music helped him understand despair and Woody Guthrie revealed the political roots of the fatalism he'd heard in Hank Williams — then he made the crowd feel Guthrie's complicated passion in their own throats by leading a singalong of "This Land Is Your Land."

Download the complete transcript of Bruce Springsteen's SXSW keynote (right-click and 'save link as').

Springsteen made corny jokes, played a little music on an acoustic guitar and showed remarkable humility, saying he thought of himself as "an average guy with a slightly above average gift." People were crying in their seats, and I'll bet every audience member walked away inking her own favorite moment into her memory.

Here's mine, repeated numerous times: Bruce Springsteen used the word "pop." Though he ended with a line that perfectly combined his trademark earnestness with a veteran's casualness — "Treat it like it's all that we have, and then remember: it's only rock and roll." — Springsteen firmly stood on the side of the poptimists who embrace a wide, shifting definition of great vernacular music.

Many are calling Springsteen's talk a pocket history of rock music, comparing it to the best orations given at the annual Rock and Roll Hall of Fame inductions. Yet like that organization, this most admired of all rockers has clearly been working on what he himself thinks "rock" can be.

It wasn't an accident that he mentioned KISS three times, and referred to Public Enemy at least twice. His parting revelation that he planned to go see some "black death metal" was likely just a quip, but the insistence that important, meaningful music comes from all cultural corners was deeply serious.

Instead of clinging to the purists' code that makes rock seem like something that could be canonized in the first place, Springsteen identified himself as a Motown-loving, Sex Pistols-fearing fan of country's Silver Fox — Charlie Rich (a highlight had him crooning part of "Life Has Its Little Ups And Downs," written by Rich's wife, Margaret Ann). He vehemently argued for the belief in popular music as dynamic and flexible, kept alive through constant redefinition by new players and fans.

This underlying message should come as no surprise to those who've spent time with Wrecking Ball, Springsteen's raucously eclectic new studio album. With its hip-hop beats and other electronic elements, its folk flourishes that recall pop-punkers like the Dropkick Murphys in the same breath that Guthrie himself is invoked, Wrecking Ball is a sonic smorgasbord that, from this veteran artist, needn't have been. But then, Springsteen's been interested in opening up his own history, too. The Promise, the 2010 retrospective set about the making of his 1978 album Darkness At the Edge of Town, included early song versions that showed Springsteen's deep and abiding love of classic soul and girl groups.

For rock's Boss to use this high-profile music industry event to celebrate the whole wide cloth of pop, however, was a bold move. Many look to him as an ideal figure, standing for "good" music in the face of Top 40 junk. Springsteen could have trumpeted Wrecking Ball's commercial success (it's No. 1 on the Billboard album chart right now) as a return to traditional values in music. But he's not interested in upholding tradition — musical, cultural or political — as a way of setting boundaries. This speech, like his music, reminded Springsteen's fans that the values he upholds, like the music he makes, point us toward the unknown future even as they honor the many steps forward that constitute our shared history.

"The purity of human expression and experience is not confined to guitars, to tubes, to turntables, to microchips," said Springsteen. "There is no right way, no pure way, of doing. There is just doing."

To celebrate Springsteen's great speech, we've compiled a playlist of many of the songs to which Springsteen made reference as he talked and sang. Enjoy this music — a portrait of the vital, wonderful thing called pop.