Accessibility links
With Grit And Polish, Hip-Hop Comes Of Age At SXSW : The Record This year's SXSW conference in Austin, Texas was a playground for lovers of rap. Performances showcased new songs from old masters, re-imagined classics and young acts looking to upstage the veterans. 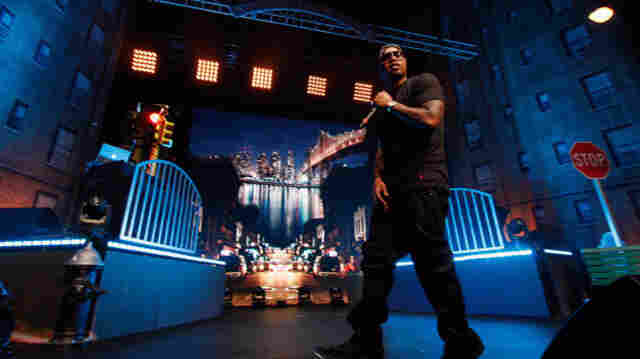 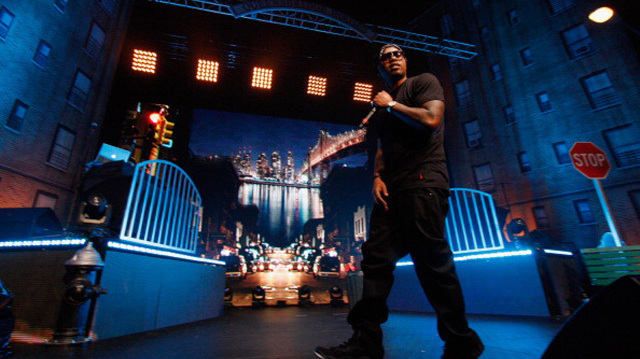 Nas performs his classic 1994 album, Illmatic, on stage at the Moody Theater in Austin, Texas during the 2012 SXSW music conference.

"I do music for women," said Timbaland, onstage at the Parish in Austin, Texas on Thursday afternoon to debut tracks from his as-yet-untitled and unfinished new album, likely coming this fall. "Y'all determine everything," he added, gesturing at a hoop earring-clad fan standing at the lip of the stage. The venerable hip-hop producer then told a story about testing Justin Timberlake's signature hit, "SexyBack,"' for four of the singer's female friends. Their thrilled response convinced the two Tims to demand that their label release the single.

Judging from the press of women dancing at the Parish club as Timbaland (born Tim Mosely) shared tracks from his iPhone with assists on the mix by DJ Freestyle Steve, his first full-length release since 2009 will be a success.

The first song he played, the just-released "Break Ya Back" featuring the dance-pop seductress Dev, made for a slow start — its minimalist beat proved too solid to move the crowd. The room went electric, though, when he switched to a collaboration with "my sister," Missy Elliott. The untitled song had the cool, mildly hallucinogenic vibe of the pair's classic collaborations, and the audience yelled its approval.

Timbaland got much looser after that, dancing and rhyming along with his next several offerings, making this listening party more like an impromptu concert. With DJ Freestyle Steve adding to the mix, and because Tim repeated said the tracks were mostly unfinished, it was hard to get a sense of the project's overall tone. But it seems that Timbaland has been keeping track of dance music trends: several songs had the big drops and squiggly noise elements of EDM (Electronic Dance Music), conjuring images of the 41-year-old Mosely lurking in the dance tents at Coachella or Bonnaroo.

Other selections had a pop feel, for which Timbaland made no apology. "I am a black man who went into a white mans world and stomped that s---," he crowed, making a few further jokes about being a master of both black and white audiences. He sang a funny, peppy hook from an incomplete song about perils of a one night stand and invited the debonair unknown rapper Short Dawg to come up and rap over his verse on another track. A third selection featured a distinctive voice that seemed like Lil Wayne's.

The best of what Mosely revealed combined the compelling noisiness of EDM with more melodic, soulful elements in a fine pop formula. The session stoked excitement among dedicated Timbo fans — including the many DJs at the club, including the mixtape king DJ Drama, who jumped onstage at show's end. "DJ Drama, let's make a mixtape!" Timbaland shouted at one point. His energy was limitless. Let's hope he reins it in enough to actually finish what could be a great new chapter in his illustrious history.

Mr. Mosely's Austin jaunt turned out to be an early media blitz. In addition to the listening party, he played DJ at a Vibe magazine-sponsored party and performed a set, with Dev on board for her vocal, at Perez Hilton's annual bash. His presence was just one element in hip-hop's full integration into the South by Southwest experience. Recent years have seen celebrities like Jay-Z and Kanye West perform alongside a panoply of up-and-comers. The fest, originally roots music-oriented and then dominated by indie rock, has become a dream for fans of the Five Elements as well.

The evolution makes sense, not only because variety naturally comes with explosive growth, but because many of pop's rising power players grew up loving rock and rap equally. Only a few rock-based subgenres popular at SXSW — death metal, songwriterly chamber folk — show little to no urban influence. More common are indie dance bands who use sampling as skillfully as any hip-hop crew, and vocalists — Dev is one — as likely to spit verses as belt out hooks.

Sub Pop Records, once the standard bearer for indie rock cred, is a good example of a label that's adapted to a scene where hip-hop and rock hold equal weight. At their Friday night showcase crowds of roughly the same size cheered on two artists who played simultaneously on a club's indoor and outdoor stages: Shearwater, an Austin rock band specializing in pastoral anthems, and TheeSatisfaction, a Seattle-based female hip-hop duo with a progressive world view and a delightfully jazzy flow.

As someone who's delving more deeply into hip-hop now that I'm in my forties, I'm grateful that the genre's veterans have embraced the opportunities posed by South by Southwest. For me, choosing the rap route meant enjoying a delightful variety of approaches to the form.

Brand new voices impressed: the fleet-tongued, dancehall-influenced English rhymer Lady Leshurr dazzled at the Driskill, while Oakland's G-Eazy presented an intriguing mix of vintage teen idol style and dirty, eccentric flow. Hitmakers abounded — I missed Eminem's cameo with 50 Cent, but stood in a cheering crowd enjoying the stentorian pronouncements of Rick Ross at the Fader Fort. At Haven, GZA of the Wu-Tang Clan put a new spin on his repertoire by collaborating with the Latin funk band Grupo Fantasma. The tiny Scoot Inn was the scene for some hardcore Bay Area cocaine rap with elders Husalah and The Jacka, from the longstanding Mob Figaz crew ; back at Perez's party, the latest Oakland sensation, the controversial Kreayshawn, showed charisma even when rapping about her breakfast.

Best of all, as I heard it, was the special appearance by esteemed New York wordsmith Nas, peforming his classic album Illmatic along with select other tracks. On the same Moody Theater stage where Bruce Springsteen had blessed the crowd with his always ritualistic show two nights earlier, Nas showed how hip-hop can make for great theater.

Nas performed similar Illmatic based sets on last year's brief Rock the Bells tour, and he brought his full stage set to Austin: a detailed replica of a New York streetscape, complete with tenements, graffiti, iron gates and his name in the flashing lights of the Great White Way. Joined by his fellow rapper AZ and his producers, Pete Rock and DJ Premiere, on 21st-century style decks, Nas reignited the intricate verse of Illmatic until the whole room throbbed with heat. Gesturing like a thespian, he gave a bravura performance that I believe would work on Broadway. Yes, he also promoted his new single, "The Don" — but this wasn't just another career-boosting South by Southwest performance for those fans dancing in the aisles and grinning from ear to ear, or for Nas, whose excitement at the crowd's reception was palpable. It was an event.

I heard some derogatory talk in Austin, suggestion that hip-hop is a source of the further commercialization of what was once a small, homey music business gathering. Snoop Dogg did perform inside a giant vending machine stocked full of Doritos; it's hard to overlook such crass branding gestures. Yet the historical breadth and playful vitality of the hip-hop I saw more than justified its prominent place at South by Southwest. What I hope for next is a similar flowering of soul and R&B in Austin. Then my annual trip will be complete.