Accessibility links
Women Rock SXSW : The Record Over the course of five days in Austin, a handful of promising musicians peeked through the noisy chaos. 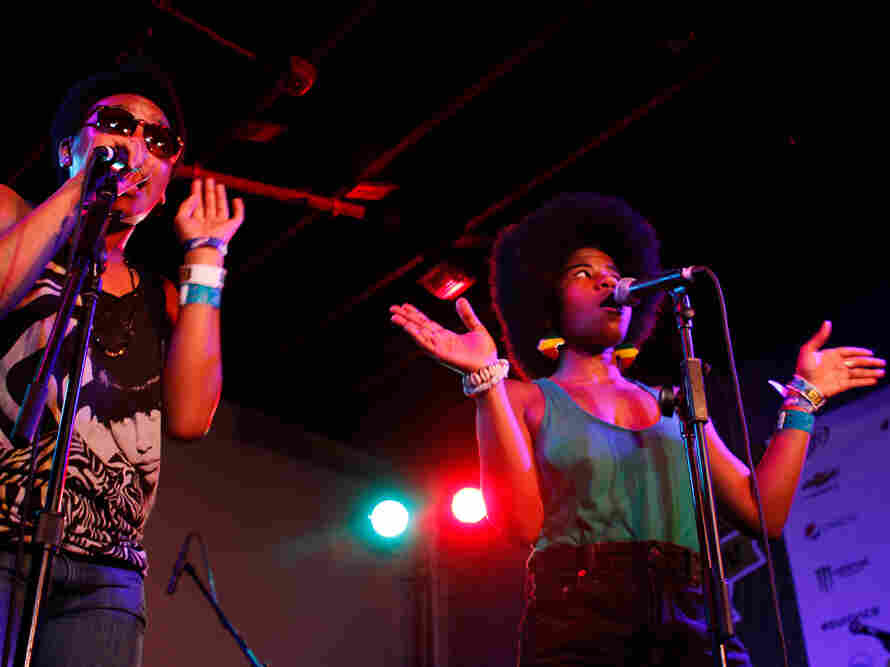 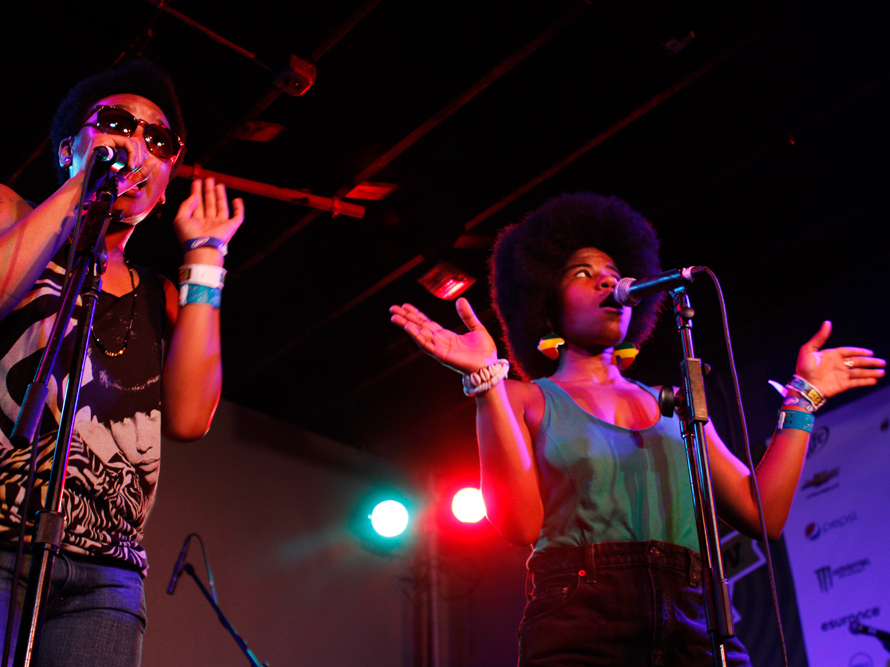 THEESatisfaction, the female rap duo from Seattle, gives a sneak peek of its Sub Pop debut at Red 7 on Friday night.

It wouldn't have stood out to me if I weren't immersed in a super-male industry festival such as South by Southwest in Austin, Tex.. But there I was, on frat-boy ridden Sixth Street, noticing the patriarchal web of door men, rock dudes inside the club and graying top dogs making money off them all. It contrasted with one trend that developed in my personal concert-viewing, which happened quite accidentally: I saw a ton of promising indie acts, many of whom haven't yet broken through, fronted by women. Here are my four favorites:

THEESatisfaction
The energy in the room for Seattle hip-hop duo THEESatisfaction at the Sub Pop showcase was something special, a humid dance party where everyone paid close attention to the words and self-produced music of Stasia Irons and Catherine Harris-White. It was a cool mix of physical surrender and mental consciousness. Irons and Harris-White rapped and sang about the frustration of living in an America where the Civil Rights Movement is too often referred to in the past tense, as if to say "mission accomplished": "Why am I chilling at the bottom of the pyramid? / I watched black women break their backs building them," Irons rapped, ending with "and it sucks." Sometimes her words came fast and sometimes they came slow.

The mini-epic "Bisexual" unfolded in paced-out vignettes that built to the line "tonight I might be bisexual." Irons' words weaved rhythmically into the cut-and-paste grooves pumping through her MacBook, and playing against that, Harris-White sang in a low register, the calm eye of the storm at SXSW. It was amazing how she shut out all the noise and humanity around her, creating a world within a world. THEESatisfaction performed tracks from their upcoming debut album, awE naturalE (out March 27, but you can listen to the whole thing here) and some brand-new jams, one of which looped a snippet of LL Cool J's "Around the Way Girl" to big cheers from the crowd.

TacocaT
Seattle quartet TacocaT officially began the second act of its career at SXSW, introducing a few hundred people gathered outdoors at Cheer Up Charlie's to a new, weed-y thrust in its pop rock music, and band-buddy relationship with hometown rap trio Don't Talk to the Cops! — celebrating a recent partnership with Das Racist's Greedhead Records. Previous TacocaT songs told stories about UTIs and misogynistic bike messengers. That feminist edge is still present in their music, but new EP Take Me To Your Dealer is more HIGH-concept — exemplified by "Volcano," which front-woman Emily Nokes sang while jumping energetically and wagging her head from shoulder to shoulder, pledging her love to a particular brand of vaporizer. She invited Don't Talk to the Cops! on stage for the second half of the set, and from there it was one crazed mantra-rap song after another, with TacocaT dancing and doing backup vocals. It was amorphously political music, supporting a variety of causes under the umbrella of the Party party. At one point, rapper/dancer emecks (lowercase hers) took the fore to announce she was not just Asian, but Laotian, and led everyone in a surprise shoutalong of "LAOS! LAOS! LAOS! LAOS!"

Colleen Green
Describing Los Angeles one-woman punk band Colleen Green's music requires mentioning that she rips off The Ramones' zippy pop-punk sound. And while her addition to that well-established canon — slowing the music down into a screwed-up, stoned version of itself and replacing the band with a mechanized drum track — doesn't sound great on paper, it actually stretches the music out and makes its joyful moments last longer. Watching her hide behind sunglasses and deadpan the dirty-sex paean "I Wanna Be Degraded" at Hotel Vegas was a display not of "professionalism" or "effort," but a loving tribute to a certain style and feeling which only buzzed-out, four-chord pop can provide.

Widowspeak
Some bands' music is suited to the noisy chaos of SXSW. Widowspeak is not one of those bands. The Brooklyn-based rock quartet's buzzing status in the hipster blogosphere practically required it to play the conference, which is designed to take ascendant acts to the next level. They gamely soldiered on at the chatty Parish on Sixth Street, playing smoldering rock to a few hundred people while thousands more partied outside. Front-woman Molly Hamilton closed her eyes often while lifting her heathery voice. She played emphatic chords on rhythm electric guitar, which lead guitarist Robert Earl Thomas decorated with staccato lines, and against the odds the music communicated grace and nobility.