Accessibility links
Crossover Appeal: The Pop Conference In New York : The Record A weekend with a few hundred of the biggest geeks in the music world — journalists, critics, scholars, performers and fans — offers plenty of moments that blur the boundaries between genre and occupation. 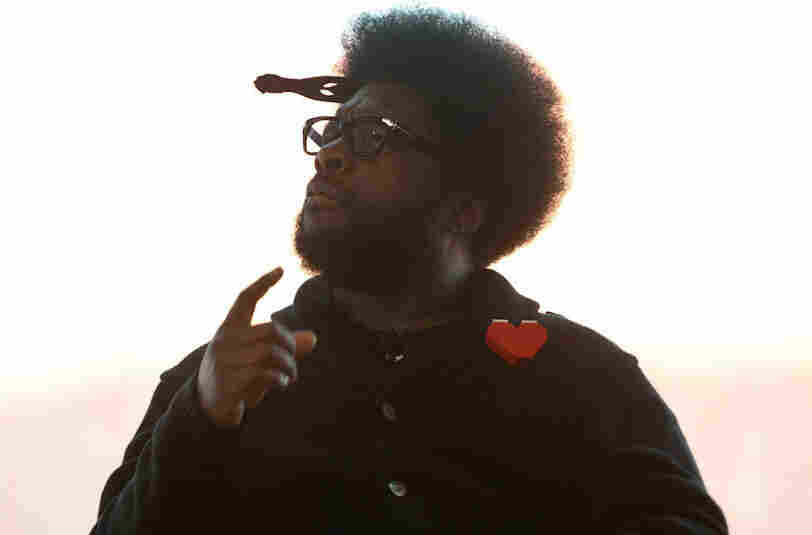 "Let's be real. We're all geeks in this room." ?uestlove, of The Roots, addresses the EMP Pop Conference on Sunday. At this moment, the drummer, producer and DJ was demonstrating the delighted confusion he tries to instigate on the dancefloor, which is why he spent years searching for the Spanish-language version of Kool and the Gang's "Celebration." Michael Weintrob hide caption 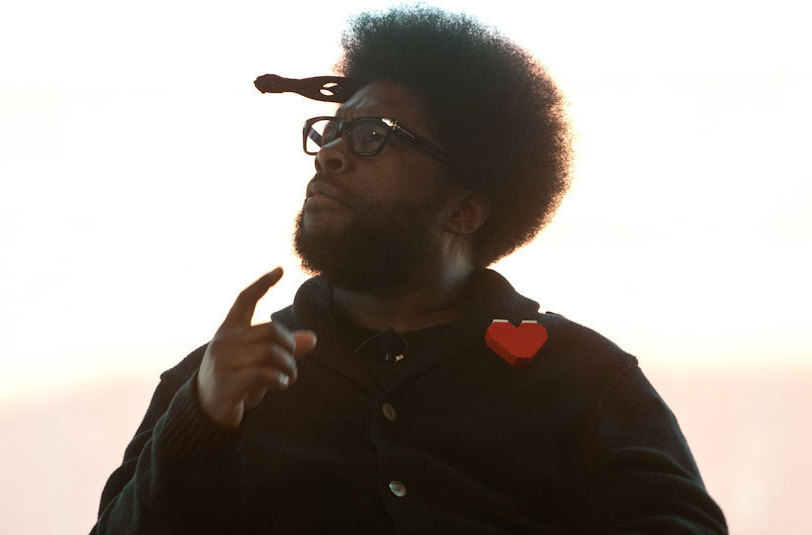 "Let's be real. We're all geeks in this room." ?uestlove, of The Roots, addresses the EMP Pop Conference on Sunday. At this moment, the drummer, producer and DJ was demonstrating the delighted confusion he tries to instigate on the dancefloor, which is why he spent years searching for the Spanish-language version of Kool and the Gang's "Celebration."

Writing about music doesn't require a partner. Like making music or listening to it, you can do it by yourself, but something cool happens when you do it with someone else. Thinking about music with hundreds of super-psyched, knowledgeable self-identified music obsessives? That's what happened last weekend in New York at the 11th annual EMP Pop Conference.

You, as a presumably non-academic human being in possession of a normal amount of musical obsession, might not be interested in spending a sunny Saturday in a classroom listening to people talk about Prince's early adventures on and subsequent rejection of the Internet, or how pop music ambitions have made local heroes irrelevant. But whether they eventually turn into books or trickle out into the mainstream via major media outlets, the conversations that took place last weekend will affect the ways you hear and read about music.

Your Pop Conference would surely have diverged from mine. With over 80 panels, roundtables and interviews in three days, I nearly always felt like I was missing something, and my choices about which to attend were governed as much by my own obsessions as those of the presenters. Here's a little of what made my PopCon 2012 feel like a party.

Because ?uestlove Has 75,000 Records
This year, the Pop Conference was sponsored and hosted by NYU's Clive Davis Institute of Recorded Music. Jason King, artistic director of the school, has been attending the Pop Conference for many years, and told me that the conference's connections to the worlds of industry, academia, art and media make it a perfect fit with the center: "That's what I've always liked about EMP: The fact that when you go into a room, there will be musicians there, there will be scholars, there will be journalists there. And sometimes you'll have all those roles in one person."

The conference opened with four musicians (Angelique Kidjo, Esperanza Spalding, Himanshu Suri from Das Racist and Santigold) and ended with another (drummer and producer ?uestlove from The Roots) on stage commanding the attention of hundreds of attendees. But in between, panels were dotted with people you can hear on the radio, whether you listen to public radio or Hot 97. Vijay Iyer, Jose James and three more talked about how economics, technology and multiculturalism impact jazz. Chuck D from Public Enemy joined Smithsonian employees to discuss the planned National Museum of African American History and Culture and spoke angrily (with Spike Lee in the front row of the audience) about the way that ambition for national success has all but killed the local hero.

?uestlove topped every other PopCon participant for depth and duration of his particular obsession. As warm and geeky as the heart-shaped Lego pin on his lapel, he talked about becoming hypnotized by the circular motion of records as a kid ("I would flip my sister's bike over and spin the wheel for hours") and the bribes his parents would offer if he behaved in school ("100 records on the first day of school and 100 records on the last day of school"). This is a guy who now has 75,000 pieces of vinyl and thinks nothing of acquiring 3,000 to 4,000 more at a time.

Because Big Shots Think Small
Probably because this was my first academic conference of any kind, I tended to veer toward papers rich in historical narrative, but two of the best papers I heard presented all weekend were from highly-regarded scholars who offered clearly enunciated and deceptively simple theories on topics that are easy to take for granted.

Jack Halberstam traced the sound of a scream through three songs performed by women with loose connections to punk, but little else in common: "The Boiler" by Rhoda Dakar & The Special A.K.A., a cover of Joy Division's "She's Lost Control" by Grace Jones and "Come Alive" by Janelle Monae. Noticing similar sounds is easily done. What made Halberstam's paper eye-opening was the idea that we can categorize songs by tracking their sounds through history just as effectively as we can using genre tags. Simple and bit magical, like opening a door into a room where things are messier than what you're used to, but somehow make a little more sense.

Karl Hagstrom Miller did something similar with those YouTube videos of people in their bedrooms performing well-known songs. Miller's very simple point: "sounding terrible might be the most universal prerequisite of being a musician," but we forget that and often dismiss amateur public performances as something to be mocked (or, at best, posted, liked and retweeted). Miller thinks we would do well to think of these videos as hours of practice that smooth out the flaws in performance. He ended with a live YouTube mash-up of Alvin Lucier's distorted spoken word piece, "I Am Sitting In A Room," Rhys Chatham's composition for 400 guitars, "A Crimson Grail," a bedroom-made solo multi-track cover of The Beach Boys' "In My Room" and a snippet of that scene from Wayne's World when Wayne tries to play "Stairway To Heaven" in a guitar shop. It was both illuminating and weirdly moving.

Because Everyone's Thinking About Crossover
We all know this feeling: after your favorite local band gets a break, sells a bundle of records and appears on a late-night talk show, you're not sure if you like them any more. A pop star recruits an underground producer to revamp her sound but ignores the context of the style she's copping. Of the 22 panels I attended (or dropped in on), nearly half turned into discussions of the often fraught moment when a song or genre at the margins collides with the mainstream.

On Friday afternoon, a roundtable discussion on musical subcultures and the difference between discovery and appropriation turned into a conversation about whether we, as people who are interested in the history and origins of music, are okay with Diplo. About an hour later Carl Wilson, a critic for Toronto's The Globe And Mail newspaper, talked about the way his hometown's musical community spun a vibrant scene out ambition and creativity and said the collapse of 'Torontopia' was due as much to interpersonal rifts as contact with the mainstream.

Alexis Stephens and Max Pearl, two young journalists, addressed these anxieties directly in a meta-analysis of journalistic and critical responses to the ever-more-compact hype cycle. As they described it, the vague but persistent impressions that music journalism is democratizing even as its collective budget is wildly slashed mirrors the spiral of the industry it covers:

"Websites like Twitter privilege novelty — viral explosions or spikes — over gradual and consistent growth in determining which terms trend and which terms don't — this bias is coded into the structure itself. The anxiety around hype is related to the proliferation of news blurbs, short reviews and free downloads on popular online magazines and blogs. Hardcore music journalism — investigation and analysis — doesn't get the same kind of rewards in terms of traffic or reach."

It makes me wonder if the younger generation of journalists and critics will take this anxiety as their totem. Certainly, people who write about music can't hope for the same type of tenured positions at venerable publications with national reach that previous generations could.

Music writing has entered the mainstream — anyone can publish themselves and tons of people believe that cursory Google searches tell them everything they want to know about a song. The community of "hardcore" music academics, theorists and critics is struggling with its new world: social media, commenters, the shifting sands of both the music and media industries.

The rule book was thrown out the window a while ago, and the people at PopCon have questions. What is the game music fans, scholars and journalists are playing now? How do you think about contemporary music — the stateless, blurred area between genres, between niche and mainstream? How much, and where, does anybody want to read, or hear, your thoughts? Are you responsible to the people who make the music, the people that listen to it or your audience?

I wouldn't be surprised if the de facto setting of the next wave of music critics will be an overwhelmed, self-conscious, worry. Maybe, once we learn to navigate the territory, the lack of boundaries will start to feel liberating.

Disclosure: Ann Powers presented a paper last weekend, and acted as both a moderator and panelist. Her husband, Eric Weisbard, is the organizer of the conference.