Accessibility links
Fractured Femmes: Madonna, Nicki Minaj And Katniss Everdeen Of 'The Hunger Games' Man Up : The Record From the world of radio pop to the arena of The Hunger Games, women in the media's eye are finding success while breaking their identities into pieces and playing with unconventional gender roles. 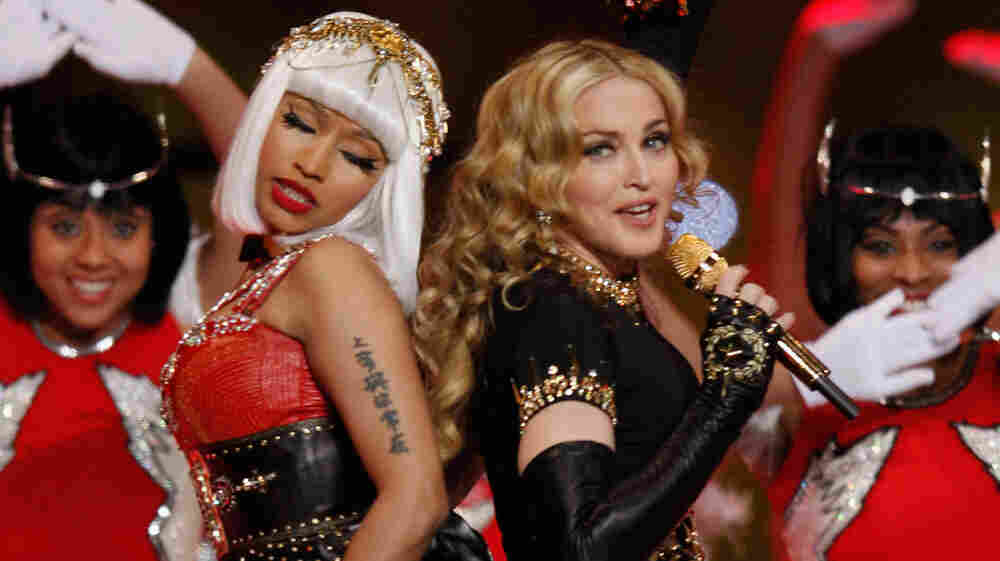 Nicki Minaj (left) and Madonna perform during the halftime show at the Super Bowl in February. In a song from Madonna's new album, MDNA, the two singers each play with traditionally feminine and masculine gender roles. Rob Carr/Getty Images hide caption 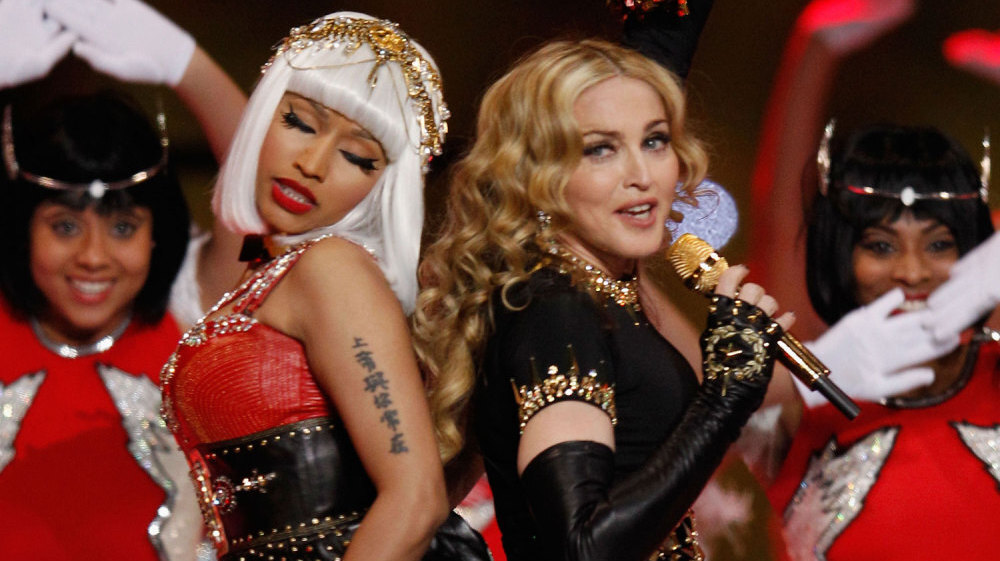 Nicki Minaj (left) and Madonna perform during the halftime show at the Super Bowl in February. In a song from Madonna's new album, MDNA, the two singers each play with traditionally feminine and masculine gender roles.

Does anybody else get a chill listening to the new Nicki Minaj/Madonna collaboration, "I Don't Give A"? An Independent Women-style strut about resilience in the face of divorce, the song celebrates frantic multitasking as a route to material success. Madge crows about being at home so infrequently that she has to ask her baby sitter for the Wi-Fi password, while Nicki sneers about not relating to Volvos — the ultimate Mom car — before appropriating one of Jay-Z's most famous lines: "I'm not a businesswoman; I'm a business, woman!" crows Minaj, claiming dominance in a world where the most powerful individuals are, by necessity, also brands and corporations.

Minaj's Hova bite is a well-earned assertion of equality. Yet given the less-than-pleasurable life Madonna describes in her verses, it's also a disturbing sign of a certain, apparently inevitable dehumanization.

"Gotta get my money back!" snaps Madge, laying out the consequences of the prenup she and Guy Ritchie didn't sign. In the service of this goal, she endangers her body ("Ride my horse, break some bones"), reduces a new lover to a luxury display item ("Have you seen the new guy?"), shoves her spiritual life into a corner ("Baby Jesus on the stairs"), and even sacks her spa routine ("no time for a manicure"). Wow, fun.

In his review of MDNA in The New York Times, Jon Pareles described the album as "bipolar." Critics are employing the same language to describe Minaj's brand-new release, Pink Friday: Roman Reloaded. Both albums veer between bubbly pop and something grittier: aggressive rap from Minaj, and unusually raw (though I wouldn't say vulnerable) lyrics on MDNA.

Something deeper is happening, too, however. This "schizophrenic" music is characteristic of a pop-cultural moment full of women splitting themselves down the middle, along the deeply embedded line between anima and animus. In film, television and fiction, as in pop, our favorite heroines don masculine garb to get things done, and then face inner crises when circumstances force them to go femme.

Minaj makes no bones about this division. She has a male alter ego, Roman Zolansky, provocatively named after the art-film circuit's most notorious alleged statutory rapist. (In an insightful essay on Roman Reloaded, Daphne Carr contextualizes the Roman character as an example of what feminists call "the internalized male gaze.") Roman is nasty but undeniably powerful; inhabiting him, Minaj is at her most effective.

Minaj's feminine side, when it emerges, is cartoonishly exaggerated, sweetness on steroids. She can't settle into either role. Roman Reloaded shows no attempt to connect Minaj's boldly intoned raps, full of fire and phallic references, to the strawberry-scented dance tracks she sings in a kitten yelp. Though many critics have accused Minaj of making these more "girly" tracks for strictly commercial reasons, they do make a statement about femininity: that it's a form of drag as potentially ridiculous as the strap-on machismo of Roman.

Madonna, who has long borrowed from the LGBTQ community to perfect her various drag poses, presents a new one on MDNA: the stern careerist. Though still speaking in her native tongue of erotica, the woman who once called for all of us to open our hearts now plays out sexiness mostly as evidence of her enduring marketability, rather than as a convincing expression of personal desire. (Even the swooning love song, "Addicted," turns into a savvy bit of marketing as the singer chants her own new nickname, "MDNA.") But Madonna and Minaj are far from alone in focusing on how contemporary life still often demands that women either play with the boys or lag behind with the Barbies.

In a recent, perceptive dialogue about The Hunger Games, The New York Times critics A.O. Scott and Manohla Dargis celebrated Lawrence's Katniss as a new kind of heroine, unselfconsciously androgynous and perfectly suited to a generation possibly ready to throw out conventional gender roles altogether. Yet it's important to acknowledge the overwhelming tone of loneliness emanating from these narratives. These are sad girls, incredibly gifted at survival but often unable to forge lasting human connections: think of Stieg Larsson's possibly autistic heroine Lisbeth Salander, or Battlestar Galactica's indelible broken soldier, Starbuck.

Many female musicians are dwelling on this painful situation, too. It's part of St. Vincent's gender-messing masterpiece of last year, Strange Mercies, and of Grimes' strangely android electronic soundscapes. It plays into the multiple personas of Santigold, who poses in both male and female costume on the cover of her upcoming album Master of My Make-Believe, and of Emily Wells, whose gamine androgyny takes a sullen turn in the video for her new single, "Passenger." That song's lyrics suggest that a woman who takes command of her own path might actually obliterate herself: "I'm the passenger, give me the keys, I wanna drive," she sings. "Give me the keys, you know I won't survive."

Literature and myth abound with girl adventurers, of course, from Athena to Joan of Arc to Nancy Drew to Janelle Monae's cyborg alter ego Cindy Mayweather. Right now, though, the critical mass of them is building toward a regiment. Why?

It all comes back to the old problem of equality never quite being as close as it seems. Women may be moving into brave new roles, but they're not necessarily doing so in community with each other or with a clearly articulated politics to support the changes they're going through. The conservative backlash against what many in my generation assumed would always be our right — sexual freedom and reproductive choice — is daunting and dismaying. The past decade's economic downturns have pushed many women into poverty even as others achieve new heights.

To get through this world, you have to be tough — and a tough woman, at least in most of the stories we share, has a hard time being a soft woman, too. Sexual expressiveness becomes a risk; so does overt emotion. Minaj has said in interviews that she deliberately chose to be more comical than sexy to fit in with her male peers. What's true in life also applies in fiction: from The Girl with the Dragon Tattoo to Katniss, the Girl on Fire, these women often feel most endangered when embraced — the opposite of old-fashioned heroines, always saved by a kiss.

"Now Peeta has made me an object of love," Katniss says angrily after her fellow fighter, the boy with whom she'll eventually enact a romance that may or may not be strictly for the cameras that stalk the Hunger Games players at every turn, announces without warning, on television, that he's long adored her. Tempting partner, possible adversary: That's what this boy is to our heroine for most of the story. Sadly, this kind of risk is what love seems to offer in the narrative that resonates in books, onscreen and in songs today.

When Madonna goes gentle on "Falling Free," one of the ballads that lends MDNA tenderness and depth, she actually cracks. "When I move a certain way, I feel an ache I'd kept at bay; A hairline break that's taking hold," she sings in her most birdlike croon as William Orbit's frozen electronic starscape swirls above her. The girl who once invited us all to open our hearts is now a woman for whom even the slightest self-exposure might prove disastrous. But she gives in. "I'm falling free," Madonna murmurs. It's a beautiful moment, full of comfort. But is this the sleep of death? Tie yourself to a tree, girl heroine. Be careful to not let yourself drift.