Accessibility links
15 Years After 'Titanic,' Does The Power Ballad Go On? : The Record From the tootle of its opening pennywhistle, "My Heart Will Go On" became Titanic's third co-star, and no power ballad since has matched it for size or emotion. 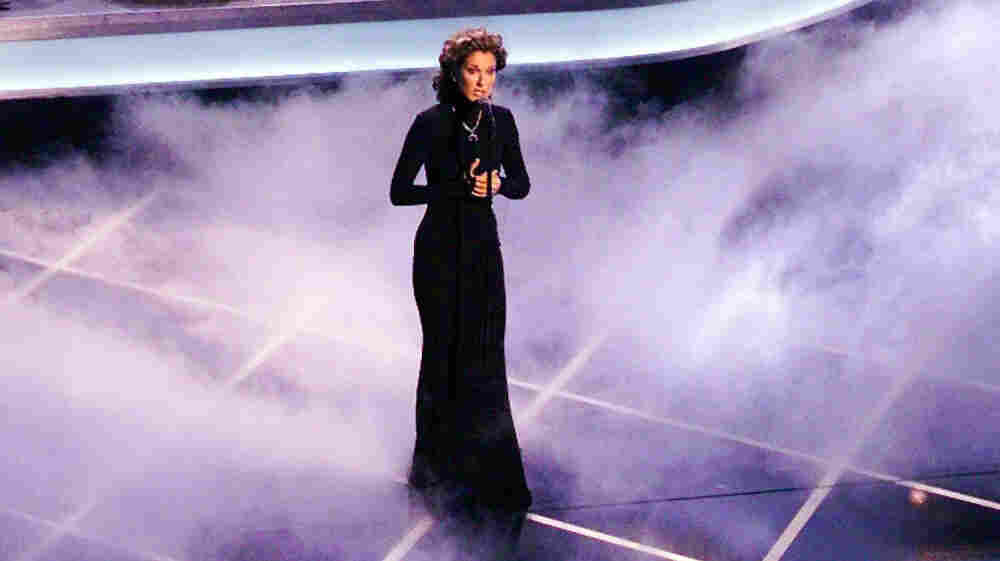 Celine Dion sings "My Heart Will Go On" at the 1998 Academy Awards. Timothy A. Clary/AFP/Getty Images hide caption

An uncanny thing happens when we remember blockbuster cultural events — for example, massively popular movies of the last century. Images, sounds and storylines slide toward each other in a cataclysm of memory, like the cargo on a massive ship that's split in half and tilted on its side (you know where I'm going with this).

Here's an example: Until last week, when I caught the 3D reissue of Titanic, I'd completely forgotten that Celine Dion's leonine wail never factors into the actual film. The film's score includes the haunting pennywhistle that announced the song's omnipresence in the late 1990s. Beyond the moviehouse, it served as a kind of weather radio, signaling the onslaught of Dion's Titanic tornado, the theme song "My Heart Will Go On," in every mall, restaurant or minivan into which it so violently tootled. And we do hear a voice; but that more delicate soprano belongs to the Norwegian enchantress Sissel, who was employed by composer James Horner to engender ambient moodiness throughout the film's score.

Sissel and the whistle form musical motifs that Horner brings to fruition only as the final credits run, after Rose has gone to her dreamy rest with Jack in that big sinking ballroom in the sky. The credits roll. Only then comes that dramatic murmur: "Every night in my dream, I see you, I feel you ... " As teary viewers confront a black screen full of scrolling names, Dion's voice becomes their conduit back to the film, instantly transformed into an ever-present past by the song that they'll hear again and again.

"The end of the film provides us with a remarkable commentary on the relationship between cinema and life," wrote film historian Peter Kramer in a 2004 essay. "After James Cameron's signature credit, which seems to assert male authorship and authority, Celine Dion's song again places us within the subjective experience of a woman. ... The song suggests that, like the singer's absent lover, the film may come to haunt them in their dreams, becoming a constant presence in their heart and lasting for a lifetime."

True blockbusters exert a superhuman grip on our common consciousness that defies the disposability of most mass entertainment. They do so, in part, through iconography. From Springsteen's jeans-clad backside and Michael Jackson's zombie dance, backward to Rhett and Scarlet's poster-worthy kisses and Dorothy's clicking ruby slippers, these elements intensely revive the feelings viewers or listeners had when they first experienced these pop phenomena. Even when we encounter them accidentally — even against our will — they bring us back. That's why even fans sometimes come to resent them.

In Titanic, the most powerful icon is a voice. This is unusual. A film's theme song may be a huge contemporary hit and an enduring favorite, but its tether to the film that first gave it meaning often frays fairly quickly. I'd dare say that half of the songs at the top of the American Film Institute's list of "America's Greatest Music in the Movies" no longer evoke strong memories of the films that bore them. ("Over the Rainbow," yes. "Moon River," "Mrs. Robinson" or "White Christmas?" No.) Horner's brilliant marriage of elements from his score within Dion's rendition, along with Will Jennings's plot-extending lyrics, powerfully showed how a theme song could carry a screen narrative's emotional impact beyond the confines of the theater and into the larger moving world.

Now Titanic has resurfaced, bringing Dion's buttery howl back with it. The revival has inspired several vigorous defenses of both the film and the song, and my brilliant peer Carl Wilson (who's written a whole fantastic book about the many meanings of Celine Dion) has weighed in to say that "MHWGO" is on its way to becoming a folk artifact — "a song that travels everywhere."

What strikes me about the difference in pop now, both within the Hollywood milieu and beyond that, is how nothing comes close to having that iconic impact. I don't mean this to exalt "MHWGO," which, like most critics, I find manipulative, and haunting only in the way that acid reflux is haunting. But I do think the environment in which mainstream pop is created and received has radically changed since Cameron first did in his boat, making it tough for its products to become icons.

This year, only two songs even received Academy Award nominations — "Real in Rio," a Sergio Mendes-driven rhythm fest that had no apparent life beyond the kiddie matinee, and the winning "Man or Muppet," which is really a parody of a Big Movie Ballad. Most songs that matter in current films work like sonic hashtags instead of icons: They're hits from other eras, remade or just reused, that enhance a film's appeal by taking us somewhere else instead of feeding the magic of its own cinematic universe.

The one exception was "A Real Hero," a 2010 collaboration between two electronic pop acts, College and Electric Youth, repurposed to great effect in the neo-noir Drive. That track's coolness reflects the film's blue mood; hearing it instantly brings a Drive fan back into the car with lonely Ryan Gosling as he cruises toward his quietly bloody fate. Yet that very quality of coolness — a reticence that dominates Drive in every way — reduces the song's iconic impact. The memories it stimulates contain a certain quality of distance.

In a discussion of current power ballads I recently had with some friends on Facebook — centering on the question "Can 'MHWGO' be topped today?" — the music critic J.D. Considine opined that "the supersized ballad is over, at least for now," because "we're into a post-passion era in which cool rules." He was shoring up a previous comment by Slate's Jody Rosen, which I'm republishing here at length:

"There's really nothing as BIG — not even in country, where the power ballad thrives. (Even the schmaltziest country singers are more understated.) It's interesting that ballads are still big biz in pop, but much of the drama has been outsourced to the production. 'Battlefield' is a good example — all of Ryan Tedder's songs are, actually. You could chalk this up to weaker singers, but look at 'Battlefield': Jordan Sparks can *saaaang*. I think maybe it's a reflection of the primacy of the producer, period. And maybe big voice fatigue set in — maybe we all wearied of Celine and Whitney and Mariah? 'My Heart Will Go On' and 'I Will Always Love You' and 'Hero' kinda cancelled out the genre. Beyonce rules, but she's not really a ballad singer, ya know? That's definitely a secondary strength for her. As for Rih, Katy P., Gaga — no way."

Rosen's point about production connects to Considine's invocation of coolness. What's changed is what we expect of an individual performer, comparable to the culture's reduced interest in singular stories. Our hyperlinked lives, dominated by the need to constantly respond to new information through social media, mobile technology and ubiquitous advertising, branding, news feeds and other media onslaughts, work against the old-fashioned absorbing experience of the blockbuster. Some will find this a relief. Others will mourn its loss. It's hard to sit in a theater for three-plus hours now and not check your text messages. (iPhone screens flashed all around me when I went to see Titanic.) And it can feel wrong, somehow, to give in to one strong voice determined to wipe away all others, even for only a few minutes.

Instead, we have ironic balladeers like Lady Gaga, whose best power moment so far came when she consciously reworked hard rock lineage of lighter-lifters; comic ones like Katy Perry, whose "Firework" offers more yelping than triumphant chest-thumping; and queens of all media like Beyonce, who can spit out a power ballad if she wants, but far prefers to offer more complex hip-hop rhythm-and-blues stews like "Countdown."

If any artist might have a voice monumental enough to replicate Dion's accomplishment, popular opinion would say it's Adele. A commercial juggernaut, she is, and a serious talent. But Adele's songs so far don't present themselves as icons to be contemplated or entryways into imaginary worlds. They're all dialogue. "Rolling In the Deep" gained momentum as the object of numerous remixes, its meaning updated by whatever producer got his hands on it. Most other cuts on 21 respond to the challenge of remaking vintage '60s soul and British pop — they stand up wonderfully in relation to that earlier era but remain stylistically bound to it. And "Someone Like You," the most restrained mega-ballad in recent memory, wins our heart precisely through its relatability — the way it seems like half of an Amtrak conversation. There's actually not much about Adele's music that's blockbuster-big.

In a strange twist, men are moving in to take up what the ladies have moved beyond; Bruno Mars had the most successful traditional power ballad last year with "Grenade," and Nate Ruess of fun. enjoys his Freddie Mercury moments of grandiose reaching, though he counters them with Ben Folds-style humility. I wouldn't be shocked if rock (pop's most traditionalist idiom) enters a new golden phase when its adherents figure out how to make iconic ballads relevant now. Somebody's going to slap something huge on a soundtrack that matters. Because, you know, James Cameron is eventually going to make another movie.