Accessibility links
Indian Record Label Hits The Road To Save Traditional Music : The Record Amarrass Records is dedicated to exposing and preserving indigenous folk music before it disappears. 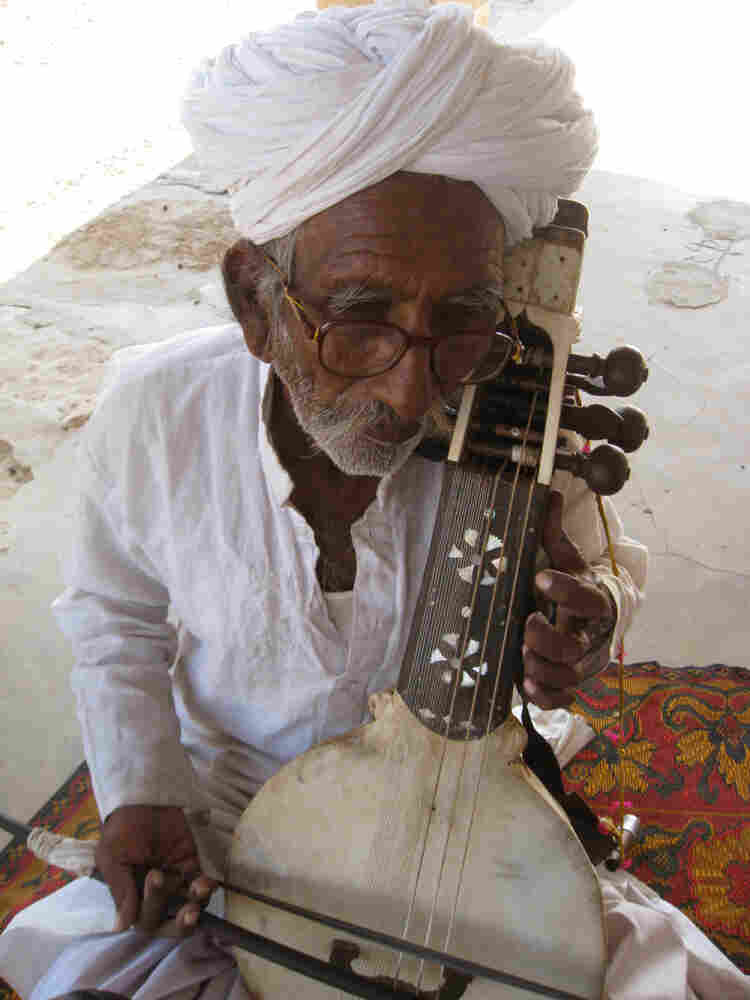 Sakar Khan with his kamancha in his home in Hamira, Jaisalmer, Rajasthan. He's passed his favorite kamancha — the one he got from his father — to his son, Darra. But this one plays just fine, if he's the guy playing it. Michael Sullivan/NPR hide caption 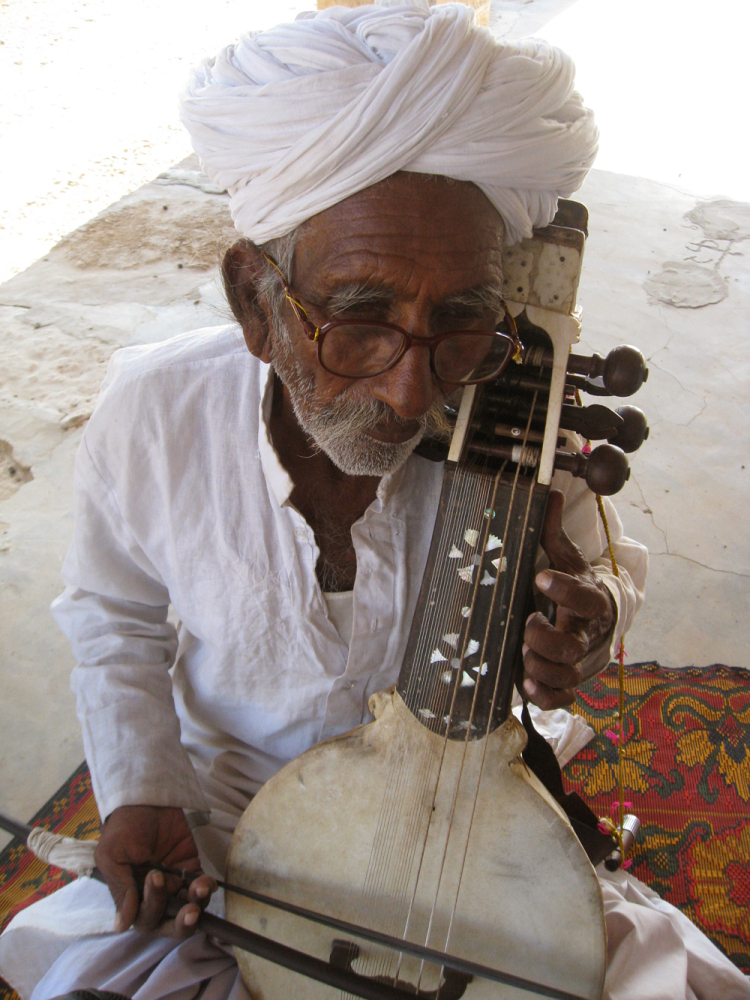 Sakar Khan with his kamancha in his home in Hamira, Jaisalmer, Rajasthan. He's passed his favorite kamancha — the one he got from his father — to his son, Darra. But this one plays just fine, if he's the guy playing it.

The number of major record labels is down to three. But that's not necessarily a bad thing when it comes to promoting music that's out of the mainstream. A label called Amarrass Records, founded in the Indian state of Rajasthan, is dedicated to exposing and preserving indigenous folk music before it disappears.

Ashutosh Sharma started a travel agency in New Delhi when he was just 19. People told him it would never work. He didn't listen, and the business has prospered. What he did listen to is music, mostly the blues — which was not easy to get when he was growing up in India — including recordings by the 20th century archivist Alan Lomax.

"I'm still into deep blues, going down the Mississippi Delta, the roots and all that," Sharma says. "I've been listening to Robert Johnson and going further, trying to locate other artists."

But the music that's caught his ear lately — and the ear of his friend and business partner, Ankur Malhotra — is something closer to home, something he discovered when the fledgling label the two decided to launch recorded a theater production called The Manganiyar Seduction in New Delhi.

"Basically, throughout life we think we're really into music. We listen to a lot of music from all different parts of the world, blah blah blah, but we had no clue," Sharma says. "Not even in our wildest dreams did we know about the quality of music right here."

When he saw The Manganiyar Seduction, Sharma quickly realized two things: one, the music was worth preserving; and, two, he needed to hurry if he wanted to capture it in its purest form in the desert of Rajasthan, which the Manganiyars call home.

"For me it was just go and record right now before somebody dies," he says.

Three times since then, he and Malhotra — who now lives in Madison, Wis. — have made the grueling 600-mile journey due west from New Delhi to the desert near the border with Pakistan.

When I went with them, the recording took place outside the home of master musician Lakhar Khan, in the tiny village of Raneri. There was no electricity, only the glow from a few flashlights. The 65-year-old Khan tuned his instrument as Sharma and Malhotra set up their recording equipment in the dirt courtyard. Inquisitive goats and children complicated their task.

The sindi sarangi has three main strings made of goat intestine and 23 sympathetic strings made of steel. In the master's hand, the Sufi-influenced melody he coaxes from it is transformative.

"The range of that instrument is amazing," says Sharma. "It just kind of touches you and moves you. The sadness it can bring is way beyond a slide guitar, and the other end — it can brighten that happiness with that sound."

The next afternoon, another journey to another village, still deeper in the desert.

Sharma and Malhotra convinced 75-year-old kamancha master Sakar Khan and his son Darra to give an informal performance outdoors, in a goatherd's shelter next to a pond.

Sakar Khan's brother joined them on the flute-like murli before bowing out and letting father and son take over. Darra played his father's instrument — a family heirloom over 300 years old that still sounds sweet. The kamancha is another stringed instrument, something like the balalaika, that has roots in Central Asia, brought here by Muslim conquerors hundreds of years ago.

Sharma just sat and listened, as if in a trance.

"They were talking, walking and sing-dancing and fighting amongst themselves with their two kamanchas," Sharma remembers. "And while doing all this, they were also playing together. So it was just like going through this crazy journey, the experience was, of these two great musicians conversing, doing virtually everything while playing together."

These instruments are unique to this community of Muslim artists who were once court musicians for the local Hindu rulers — or Rajputs. Sharma says the musicians are a kind of bridge between the two religions.

"They were basically considered a local goddess' kids," he says. "And the way to get to that Hindu goddess — these are Muslim musicians — to get her blessings, you need to call the Manganiyars to play at any ceremony, whether a birth or marriage or whatever. That's what keeps them going the last so many hundreds of years. These were their patrons, and they took care of them basically."

Then came independence; then partition, in 1947. The Rajputs saw their lands taken, and the Manganiyars were largely abandoned. Only in the past 20 or 30 years has the Hindu upper class started regaining its wealth, running forts and hotels for tourists. And that, says Sharma, has been a mixed blessing for the Manganiyar musicians who now play mostly for tourists.

Yes, this means more work. But, says Sharma, "because of the commercialization now, the traditional music is basically dying. They could be singing the latest Hindi Bollywood song with all the folk instruments and 8 out of 10 people wouldn't know. And slowly the next generation is realizing you can sing whatever and get away with anything, so they're not learning the traditional music."

The lack of skilled instrument makers alarms Sharma too. The best kamancha maker, for instance, has essentially abandoned his craft. He can earn far more making sofas in the big city.

The final informal performance of the trip I joined them on happened in the village of Sanawada — a few dozen simple huts and a few upscale concrete houses, about 80 miles from the tourist town of Jaiselmere. The night air was cool and the sky impossibly bright with stars. The star of the performance was a 55-year-old blind singer and harmonium player, Nahal Khan.

The area of Rajasthan we were in is dotted with wind turbines to help generate energy, hundreds of them rising from the desert, their huge fans turning slowly in the breeze. It's impossible not to see a little Don Quixote in Sharma's effort. He's a man tilting at windmills to save obscure music few people even know exist, let alone want.

His record label has put out two albums of the Manganiyars' music so far. Neither of them has broken even, but they are starting to sell a little.

"We think — all of us think — there are enough idiots in the world who would want to buy this music if it's available to them, because the artists are great and the music is great," he says. "If you're not connecting the two in some way, the fault lies with you — not in the music, not in the audience."

Half the profits — if there ever are any — will go to the musicians. And if this idea should take off, Sharma says, the plan is to expand to other parts of India and the world. For now, however, Sharma has no plans of giving up his travel agency, that other impossible dream that became a reality.

"Now it's even more important," he says, "because it's funding all this madness, this exercise so far."