Accessibility links
How That Tupac Hologram At Coachella Worked : The Record A trick of light made the rapper, who has been dead for more than 15 years, the most talked about musician after the first weekend of this year's Coachella festival. 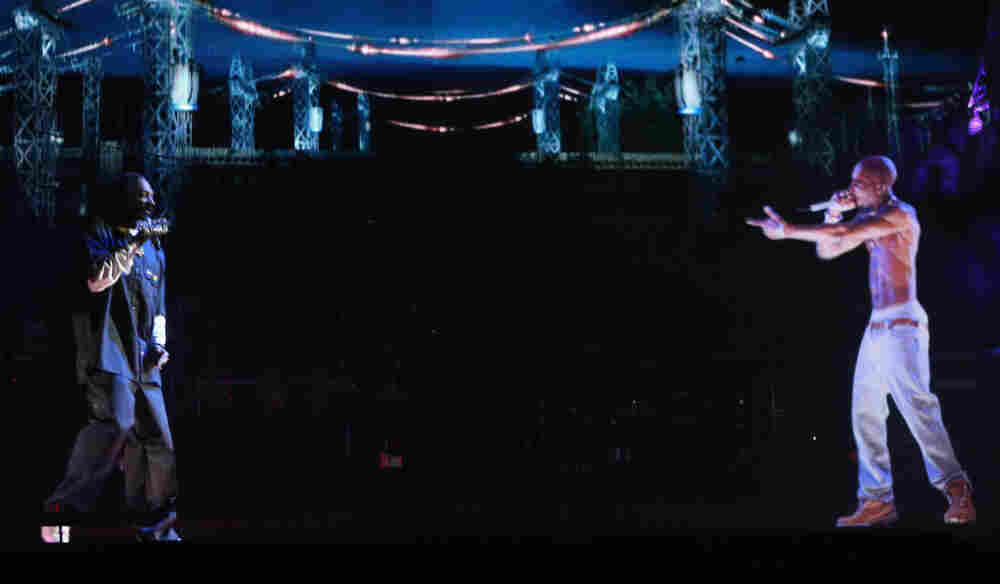 Near the end of his headlining set at the 2012 Coachella Valley Music & Arts festival, Snoop Dogg (left) performed next to a hologram of the deceased Tupac Shakur. Christopher Polk/Getty Images hide caption 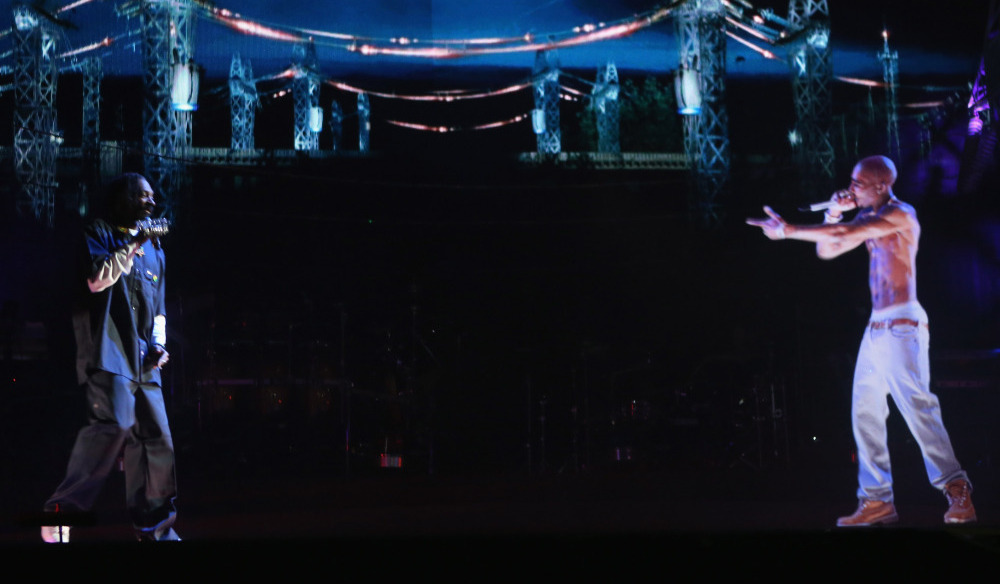 Near the end of his headlining set at the 2012 Coachella Valley Music & Arts festival, Snoop Dogg (left) performed next to a hologram of the deceased Tupac Shakur.

Tupac Shakur was killed more than 15 years ago — three years before the first Coachella Valley Music & Arts festival was held. But thanks to a trick of light, he's probably the single most talked about musician who performed at this year's version of the festival.

Tupac At Coachella: A Long History Of Singing Ghosts

Except, well, "performed" is a funny word to use. The Tupac who appeared onstage during the headlining set by Snoop Dogg and Dr. Dre on Sunday was a hologram, more a feat of technology and bravado than a performance. (You can watch video, which includes a fair amount of profanity and other NSFW language, here.)

The image looked shockingly good, but how did it work? James Montgomery wrote about the Tupac hologram for MTV news, and explained to NPR's Audie Cornish that the Digital Domain Media Group, a company that has produced special effects for movies like X-Men: First Class, Transformers: Dark of the Moon and The Curious Case of Benjamin Button, used "really old theatrical technology" with a "2012 spin."

"There's an overhead projector that sort of reflects down onto basically a tilted piece of glass that's sort of on the stage floor," Montgomery says. "That then reflects the, well, reflection onto a mylar sort of screen, and it projects in this sort of 3-D kind of thing where it allows the other performers to sort of walk in front of Tupac and basically interact [with] him."

Montgomery says the exact technique behind the technology is still a little bit in the dark, so to speak. "You don't know whether or not they hired an actor to portray him and then sort of put digital clothing over this actor in post-production, or they built it in a computer," he says.

But the technology is there, and don't bet it'll be limited to this single appearance. Already, Snoop and Dre are reportedly thinking about taking the Tupac hologram out on tour. Montgomery thinks it won't end there.

"Once this becomes a little less cost prohibitive, given the wild popularity of deceased stars like Elvis or Michael Jackson, I can see Las Vegas shelling out a lot of money to have these sort of 'live reviews,' " he says. "It's also interesting if you look at the current stars of today, someone like Madonna or a Paul McCartney. Are they looking at what happened with Tupac, and are they thinking, maybe I have to rewrite my will and sort of include something that says, 'I don't want my likeness projected in 3-D holographic form at any point in the future.' "