Accessibility links
Remembering Levon Helm, Drummer And Singer In The Band : The Record Helm played superpowered, shifting backbeats, helped Bob Dylan go electric and sang some of The Band's biggest hits, including "The Weight" and "Up On Cripple Creek." He was 71 years old. 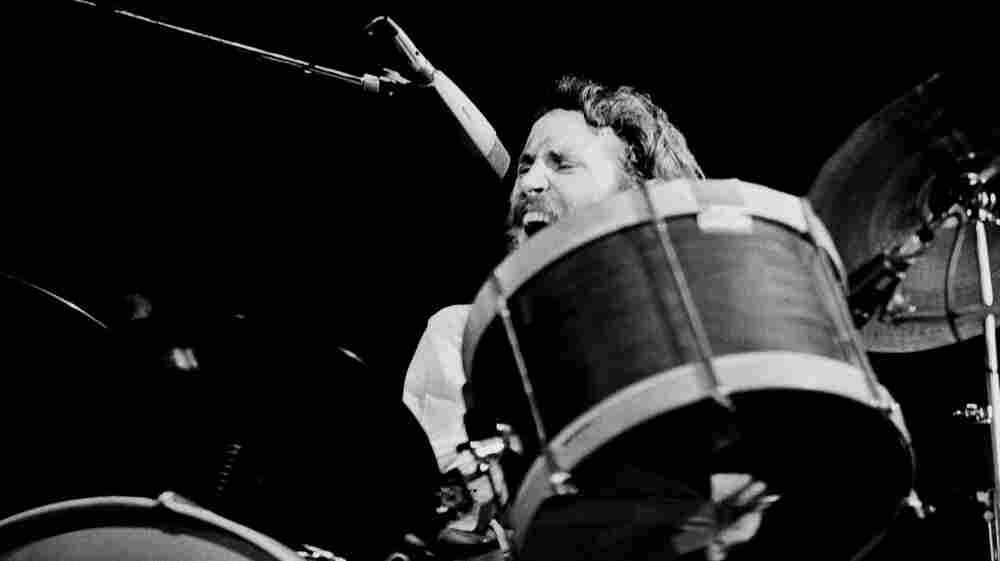 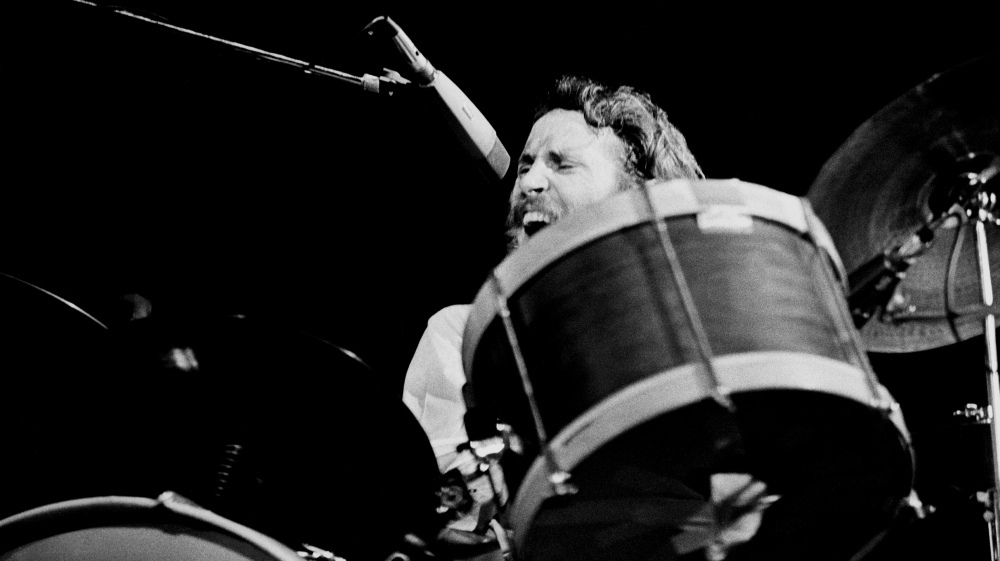 Levon Helm performing with The Band in 1971.

Levon Helm, a member of influential rock group The Band, died in New York City on Thursday. The drummer, singer and actor, who backed Bob Dylan as he turned away from folk toward a more electrified rock sound, was 71 years old. Though Helm suffered from cancer for several years, he was known later in his life for Midnight Rambles, concerts he hosted at his barn in Woodstock, N.Y.

At the audio link, you can listen to a remembrance of Helm's life reported by NPR's Felix Contreras. That report includes the voice of critic Will Hermes, who wrote this appreciation.

The first time I saw Levon Helm perform, it was already late in the game. It was the '90s, and the soulful singing drummer was touring with the remains of The Band — as in The Band, who backed up Bob Dylan during his first electric tour in the mid-'60s, then famously decamped with him to Woodstock, N.Y., where they recorded hours of offhandedly brilliant, rough-and-tumble folk-rock that would later be released as The Basement Tapes.

The Band also began recording music without Dylan, music that changed the shape of rock 'n' roll, veering it off the psychedelic highway that The Beatles and others were traveling and driving it down a dirt road, deep into the woods of America's history, mythology and tangled cultural roots.

Missing from the particular show I attended, which took place at a roadhouse in Minneapolis called The Cabooze, was Robbie Robertson, the guitarist and songwriter who remained estranged from the group after the chapter-closing Scorsese-directed documentary The Last Waltz, and Richard Manuel, the tortured singer/pianist who committed suicide in 1986. It could've been one of those sad jukebox concerts, but it wasn't. Alongside his pals Rick Danko and Garth Hudson, Helm played his Promethean grooves, those superpowered shuffles with their wicked backbeats and ever-shifting focus, the kind of flesh-and-blood timekeeping even the most brilliant drum programmer will never match.

And he sang those songs: "The Weight," "Up On Cripple Creek," "Ophelia" — songs that he owned by virtue of his voice, which was as indelible and unmistakable as his drum style. It was like seeing the Rockies or the Grand Canyon, and the fact that I was seeing it in a glorified bar and not Carnegie Hall or some such temple (where surely this Great American Music deserved to be, if any did) made the experience even more powerful.

Helm was diagnosed with throat cancer not long after that tour. He underwent radiation treatment, and like many Americans who have to pay out of pocket for their health care, he ran into financial trouble. At one point he was in serious danger of losing his home in Woodstock, where he'd settled after his days with Dylan. And this began one of the most remarkable second acts in rock history. Needing to raise money, but too frail to tour, Helm began giving concerts in the barn-cum-recording studio attached to his house, inviting local and visiting musicians to join him. He also asked guests to bring drinks and a dish, making each show a potluck feast. He called them Rambles. 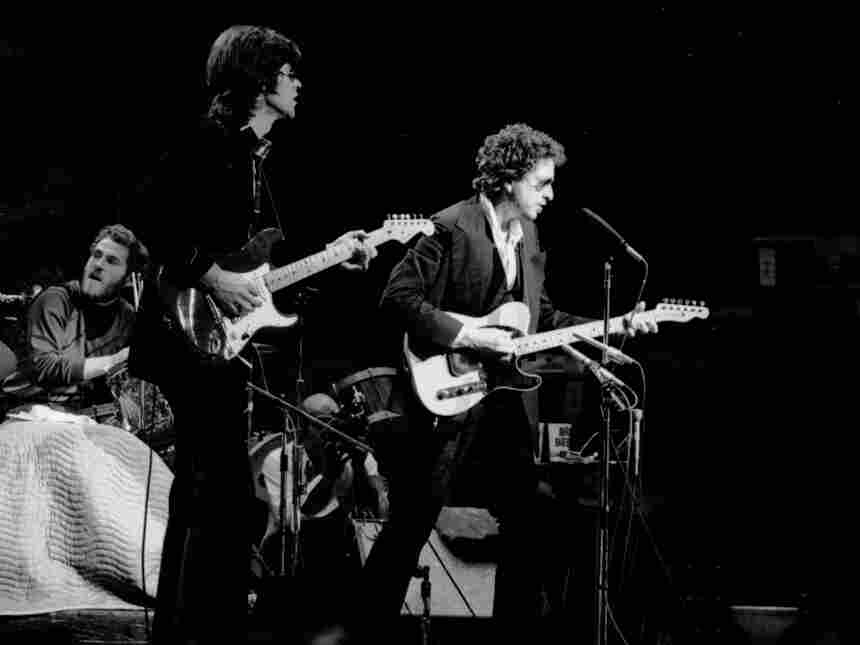 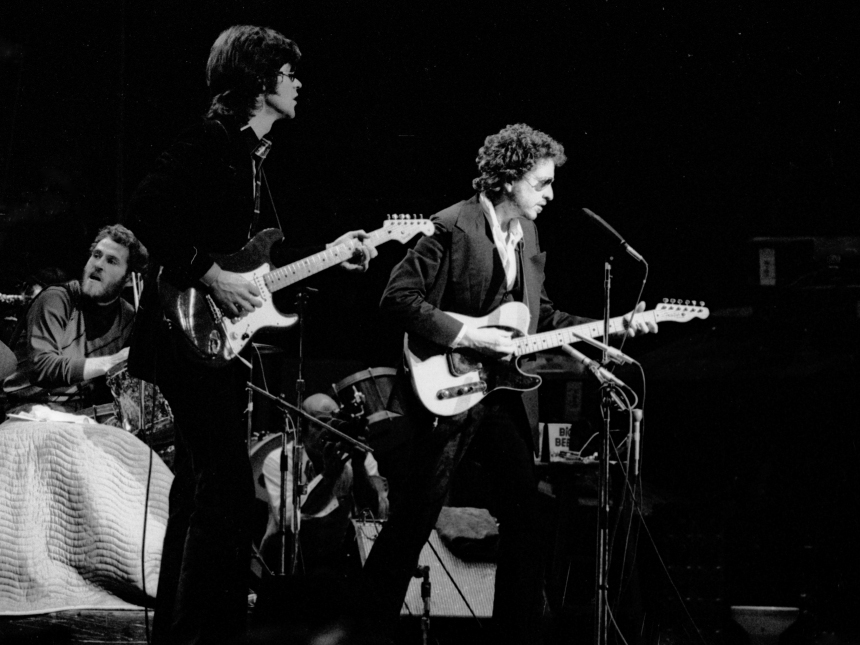 At first, he was unable to sing. But the cancer treatment was working, and as his throat healed, he began singing again. At the first Ramble I attended, back in 2005, Helm's old friend Emmylou Harris sat in, and the two sang "Evangeline," a song they did decades earlier on The Last Waltz LP. "I thought those good days were behind me," he told me a couple of days after that show. "So you can bet Saturday night was the celebration of a miracle in my little life."

Helm got back on his feet financially and physically, and the Ramble became a regular event. People came from around the world to hear the man play in his own home. Along with established musicians like Elvis Costello, he'd invite younger acts like My Morning Jacket up to play. Once I met a pair of British musicians there from a group called The Magic Numbers. They were weaned on records by The Band and couldn't believe they were there.

For a while, Helm was healthy enough to begin traveling and playing out again. He resumed making records, and won himself a few Grammys. As the Rambles became a bona fide regional attraction, Helm became a kind of cultural ambassador for Woodstock and New York's Hudson Valley. He let neighborhood folks come to the Rambles for free, played countless benefits for local charities and fundraisers. Once a year, he'd stage a special Kid's Ramble at his house, where five bucks got you an afternoon of family-style music plus all the hot dogs, hamburgers, pizza and cupcakes you could eat.

I live in the Hudson Valley, and I've seen Helm — or simply Levon, as most people around here generally refer to him — perform many times, his smile impossibly wide, that signature black glove on his tireless left hand. Watching him, it was easy to believe his mighty groove and massive grin could burn off any disease. For a while, it seemed, it did.

A few days ago, I was speaking with the members of a young blues-rock band. They mentioned they had just been camping in New York's Catskill Mountains in between dates on a national tour, and I noted that they hadn't been far from Levon's place. They said they were big fans, and thought it would be amazing to play a Ramble some day. It's sad to think that can't happen now. But Levon's legacy remains alive in his music, which will continue teach, inspire and wow all comers.